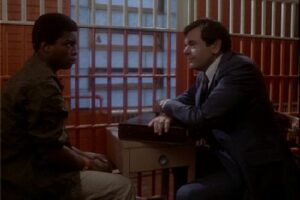 Dummy tells the story of Donald Lang, a deaf, mute, illiterate, Black teenager living in Chicago, working the loading dock of a produce center. The film opens with him venturing out to a neighborhood bar and picking up a prostitute. The next day, a local finds the woman’s body near her yard. Lang is arrested, and, due to his conditions, is left with no way to defend himself in a courtroom. Enter Lowell Myers, a deaf lawyer tasked with handling his case.

Dummy would be an incredulous story if it weren’t true. Indeed, even with the ever-growing lore of serial killer documentaries and podcasts, Lang’s story feels like it’s awaiting resurgence. Frank Perry’s movie — made for CBS in 1979 — shows the lengths Myers went in order to assure this forgotten soul at least got a fair shake in the eyes of the law. Screenwriter Ernest Tidyman (author of the Shaft novels and subsequent 1971 blaxploitation film) is boldly less concerned with the criminal aspect of the story and more in-tuned with the human-side of it.

LeVar Burton (Roots, Reading Rainbow) portrays Donald Lang, an absurdly challenging role he valiantly handles through reactive facial expressions and quiet poise. An underrated actor in general, Burton makes Lang a character without making so much as an audible grunt, a testament to his nuance as a performer. Then there’s Paul Sorvino, who you’d believe was deaf if you didn’t know any better. Sorvino’s vocal inflections are not comical nor caricatured. Although at the time a 20+ year veteran of the screen, Sorvino no doubt had to practice the careful enunciation of every line.

Also worthy of a mention is Brian Dennehy as Ragoti, Lang’s boss at the loading dock, who exudes all the gruff and understated warmth of those denim-clad men who keep the city of big shoulders and small egos moving on a day-to-day basis.

It’s sad to think that if Dummy were made today, the casting of Burton and Sorvino — who are both hearing individuals — would likely merit headlines and controversy courtesy of the daily outrage machine known as Twitter. It likely would’ve robbed us of two beautiful performances.

Dummy is indeed plagued by what I can’t describe any better than “TV movie editing.” You know the type. There are several freeze-frames (all that’s missing is a five-minute commercial block) in addition to jarring cuts that show the limitations of the budget. That said, the film was indeed shot on location in Chicago, and as a native, I loved every minute of the authenticity. Dummy features several notable locations, including the Washington Park Homes and the Cook County Jail. Coupled with the fall/early winter-look of the picture, you can almost taste the chilly nip in the air. The whole movie feels like the Chicago version of NYPD Blue. On that note, I loved every minute I spent with the film.

NOTE: Consider purchasing Dummy via the Warner Archive Collection, an ongoing burn-on-demand program Warner offers. They burn DVD-Rs of TV or long-out-of-print movies where the demand is low. The film is available on Amazon for a low-price, considering the preservation aspect.

However, the film is also available to watch on YouTube, free of charge.