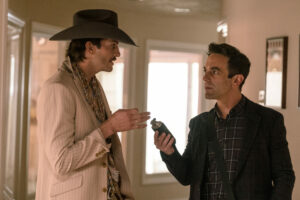 Vengeance revolves around Ben Manalowitz (B. J. Novak, The Office), a New York journalist and outspoken intellectual — the kind that reminds you of it by way of lengthy ramblings at functions. Early in the film, Ben has a conversation with his editor, Eloise (Issa Rae), where he suggests that the reason it’s so difficult for we, as humans, to live in the moment is because we can create our own moments through technology. He adds that this creates a ripple effect with disconnectedness and feelings of division, which currently plague this country.

In these fleeting minutes, Novak, who wrote and directed Vengeance, proves he has something to say. And he spends the subsequent hour and forty minutes illustrating it with great black humor, absurdity, satire, and perspective.

The story truly begins when Ben is in bed with a woman and receives a late-night phone call from Ty Shaw (Boyd Holbrook), who lives in Abilene, deep in the heartland of Texas. Ty rings to tell Ben that his sister, Ben’s girlfriend, Abby (short for Abilene, oddly), has died. Plot twist: Ben doesn’t have a girlfriend named Abby. He’s an unapologetic womanizer, who enjoys hooking up with many different women. While on the phone with Ty, he scrolls through Instagram and remembers this aspiring singer named Abby (Lio Tipton). He hooked up with her and promptly forgot about it, while Abby declared their fling a relationship to her family.

Stuck between a rock and a hard place, Ben flies to Abilene, attends Abby’s funeral, and mingles with her grieving family: her mother, Sharon (J. Smith-Cameron), her younger sisters, Paris (Isabella Amara) and Kansas City (pop singer Dove Cameron), and her younger brother, “El Stupido” (Elli Abrams Beckel). What a backwoods bunch these folks are, but that’s for you to discover. Moreover: Ty is convinced Abby was murdered, probably by a Mexican drug dealer named Sancholo (Zach Villa), and implores Ben to help the family avenge her death. A man who prioritizes status in his relationships, Ben initially doesn’t see the purpose nor fruitfulness of sticking around. That is until he realizes that he could potentially use Abby’s death and her grieving family as the basis for a podcast series depicting rural convictions and Red vs. Blue State ideologies. This could be his “great American novel” — except it’s a podcast. So, Ben sticks around to gather material, with Eloise aiding him in the process remotely.

Vengeance is In Cold Blood for the post-truth era. Novak chews on a lot of fascinating ideas, and it’s a thrill to report most of them are fleshed out enough to work: including, but not limited to, the persistent tussle between intuition and theories as well as recordings promoting inspirations, not people, in the long-run. Just when you fear it starts getting a little too obsessed with making the Texans caricatures, the film leans into the emotion, as well as the crime angle.

An Ashton Kutcher performance is hard to come by these days, so it’s a thrill not only to see him in a movie but also a role as juicy as this one. He plays Quinten Sellers, a low-rent but intellectual record producer, who cut a handful of Abby’s demos, as she was an aspiring singer. It’s Quinten who proposes the idea to Ben that archival recordings, be them audio, video, or textual, are ultimately all we have left of people who have passed. Similar to archaeology, humans cherry-pick what we remember. We recontextualize quotes from movies we haven’t seen or books we haven’t read to fit our personal world-view — until we’re nothing more than an archived soul to the next generation. It’s very Godardian; the French New Wave filmmaker once said that art attracts us by what it reveals of our most secret, or inner, selves. The same pretense is often on display when the Shaw’s dominate the screen.

A perfect example of the contrasting world views of Ben and the Shaw family is when Abby’s surviving relatives are all singing the praises of the fast food joint Whataburger. Ben tries to beat the reasons out of them for their obsession with the chain, but their only justification is “because it’s always right there.” Intellectual reasoning be damned; the family just wants to have their burgers and eat them too. It also helps that Vengeance is quite frequently funny as all hell. Its dark humor treads on absurd at times, but its observations of the flaws and misgivings of both educated northerners and blue collar southerners isn’t as surface as it initially appears. Even a sequence set at a rodeo line-dance has Ben mystified how the crowd can choreograph their moves to any given song. “Collective consciousness,” says Ty. Having recently relocated to Iowa, and been to a couple country line-dances for the first time in my life, I can say that’s the best explanation I’ve yet to hear. I’m used to songs like the “Cha Cha Slide” that instruct me on the moves.

A trifecta of genres, merging comedy with suspense and mystery, Vengeance successfully juggles all three while making the core murder mystery intriguing — while providing enough thoughtful theories to make it substantive. Its observations are far from folderol, and Novak has definitely marinated over this material long enough for it to come across as a distinct vision. This reminds me of recent neo noirs such as Galveston and Nightcrawler: a contained, self-assured, original movie — the kind we all clamor for yet rarely give the time of day.