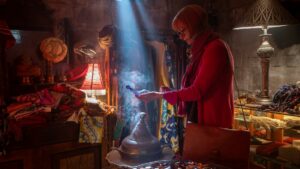 I’m not sure why five production companies pooled together $60 million (plus P&D advertising) for George Miller to direct a movie that will elude all but a small sector of the moviegoing masses. However, I’m glad they did. Three Thousand Years of Longing made under $3 million last weekend, and it’s poised to be one of (if not the) biggest bombs of 2022. Of course, that’s not indicative of quality, but the fact that these kinds of passion projects can still find a place in theaters, albeit for an increasingly brief time, makes me happy. We cinephiles should enjoy it while we have the privilege.

It’s easy to forget Miller’s versatility as a filmmaker. Yes, he helmed the Mad Max series, but his filmography also includes both Babe movies — the latter being the ultra-rare sequel to a family movie that’s better than the original — the contagiously fun Happy Feet, and the Cher-led Witches of Eastwick. Seeing him write and direct a project that could fairly be summarized as a “kids movie for adults” isn’t a left-field move by any stretch. In fact, Three Thousand Years of Longing has a lot in common with Guillermo del Toro, specifically Pan’s Labyrinth, in tone, visual effects, and welcomed weirdness.

A mediation on love and the notion that our modern world has been sullied by trying to explain wonder instead of just basking in it, the film revolves around a British narratology scholar named Alithea Binnie, played by Tilda Swinton because… who else can play that specific of a role, right down to the character’s name? Alithea is obsessed with deconstructing stories and analyzing them to the nth degree. She’s essentially the narrator of this one, until it’s hijacked by a djinn played by Idris Elba. The djinn emerges from an antique bottle Alithea purchases on a lecturing trip in Istanbul.

Let me back up a minute. Alithea isn’t the most reliable narrator to begin with. Early in the film, she sees a homely troll at the airport, who tries to steer her luggage cart in the wrong direction. Later, she is burdened by a demonic heckler at one of her lectures. It’s never clear whether or not the djinn who explodes out of the glass-blown bottle truly exists, but
most anyone who sees this will revel in the ambiguity.

Back to the plot: the djinn practically begs Alithea to make three wishes. Alithea knows that wishing has dangerous consequences. A less-read soul might’ve granted themselves untold riches and a palatial estate before the djinn finished his spiel on prohibited wishes. When Alithea remains locked into her convictions, the djinn opts to tell her three tales of his past, which rendered him spending much of his existence locked in the bottle. One of the stories involves the Queen of Sheba (Aamito Lagum), his cousin-turned-lover. Another tells of his romance with Zefir (Burcu Gölgedar), a nubile wife of a Turkish merchant, who discovers the bottle in the mid-19th century.

Miller’s framework would be comedy fodder if it weren’t so seriously articulated by two accomplished actors who, I still feel, are just getting started. The bulk of Three Thousand Years of Longing takes place in Alithea’s swanky hotel room, both her and the djinn in fluffy white bathrobes, waxing intellectual. All due respect to the VFX workers, who bring Miller’s vision to life with kaleidoscopic visuals, but I was most captivated by these talky, tightly shot sections that got the gears turning on the right side of my brain. Alithea would tell me to be careful what I wish for, but I kind of wanted more of a two-hander approach — think Good Luck to You, Leo Grande without the sex.

As elegant as the visuals that accompany the djinn’s fantastical life-stories are, I will admit, they drove me nuts by the hour-mark. The djinn’s narration prevents us from getting invested in these worlds. There’s little characterization of these periods beyond the surface. It makes staying connected to the material a chore in the long-run. The imagination runs wild, as does the narrative. In my opinion, it starts to give credence to the idea that Alithea is having an overactive daydream by her lonesome.

Paradoxically, especially given its co-lead’s background in narratology, Three Thousand Years of Longing is ultimately less about the coherence of the narrative and more about two souls coming together and sharing contrasting points of wisdom. As an exercise, it’s worth the price of admission. However, your mileage will vary, and I’ve already mentioned how I’m often better at admiring fantasies more than I am appreciating and latching onto them.