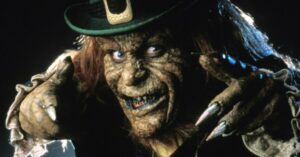 Most people decide to read, take a nap, or go for a walk when they have an hour and a half to kill. I, on the other hand, flip through channels, inadvertently stumble upon a Leprechaun marathon, and say, “what the hell?”

I’ve steered clear of reviewing many Leprechaun movies in my day because I find them deceptively challenging to analyze. After the first sequel, these were movies that hardly took themselves seriously. When that happens, it makes critical analysis a fruitless endeavor. Prior to this week, I had seen only bits and pieces of Leprechaun in the Hood. As fate would have it, filling in the gaps isn’t just unnecessary, it’s occasionally grueling.

The stalwart anchor of this franchise — which began in 1993 and is still chugging along after a 2014 reboot followed by a 2018 sequel (I think) — is Warwick Davis. Davis was not only the singular constant in this series through the first six films, but he also got better each time he spent what was likely a full day in a makeup chair. One of the only redeeming qualities of Leprechaun in the Hood is Davis is as good as he’s ever been as the pint-sized Lep. Not only has his makeup and costuming improved, but his snarling delivery and unnerving giddiness shows that at least someone was committed to his craft on these projects.

A cross between a slasher, a demented folktale, and blaxploitation cinema, Leprechaun in the Hood opens with two aspiring hip-hop artists in Mack Daddy (Ice-T, who delivers a competent performance) and Slug (Barima McKnight) robbing a tomb full of gold. They remove a gold medallion from a leprechaun statue, which awakens the dastardly little bastard (Davis) from his stone slumber. He murders Slug, but Mack Daddy manages (by way of Rube Goldberg ingenuity) to get the necklace back on the Lep before he sees his throat slashed. Mack Daddy steals the Leprechaun’s magical flute, as well as the statue. 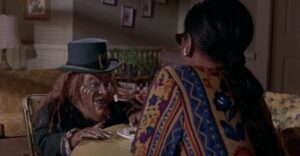 Fast forward some years later and Mack Daddy winds up becoming a Suge Knight-esque figure in the rap game about the same time three hoodlums — Postmaster P. (Anthony Montgomery), Stray Bullet (Rashaan Nall), and Butch (Red Grant) — are trying to strike it rich by making positive rap music ala Will Smith. When Mack Daddy turns them away due to their refusal to make gangsta rap, the three retaliate by robbing him and swiping the ancient medallion, bringing the evil Leprechaun back to life.

Leprechaun in the Hood teases you with a competently written prologue followed by the introduction of the three young rappers, all of whom have at least some defined personalities. Postmaster P. is the ringleader of the group, with a good head on his shoulders; Stray Bullet, as his name suggests, is a loose cannon; and Butch is obsessed with chemical compounds and gets flak from the whole town due to his virginity. It’s the strange case where a movie starts out with some characterization and loses it the longer it goes. The three rappers wind up devolving into archetypes as soon as the body-count starts piling up.

But Leprechaun in the Hood just isn’t that funny for much of its runtime. It’s predicated upon lame ethnic jokes (a Chinese shopowner rapping and dancing might be the most insufferable moment of them all), dreadfully poor lighting, and a hastily paced plot that renders its climax incoherent and rushed. You can justify it as a horror movie that’s “so bad it’s good,” but even in that realm, you could do better — I’d be quicker to recommend The Gingerdead Man and Jack Frost (1997).

NOTE: As of this writing, Leprechaun in the Hood is streaming on Amazon Prime Video, Hulu, and several other cable/streaming platforms.