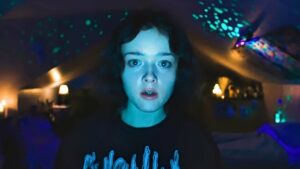 One evening, alone in her room — where she spends most of her time — the innocent, doe-eyed Casey (Anna Cobb), a teenager in an indistinct American town, looks deep into her computer’s webcam and says the line three times: “I want to go to the world’s fair.” She follows it up by ferociously pricking her finger several times and smearing blood on the laptop, all while a disorienting, flickering YouTube video plays on her computer.

Such absurd actions are part of the latest challenge sweeping the internet in We’re All Going to the World’s Fair, a low-key, psychological thriller/horror amalgam. The “world’s fair challenge,” as its known, causes people’s bodies to change in ways that may or may not be real. It’s difficult to tell, as people document their changes via separate YouTube videos they upload for tens of views. The film itself is a two-hander at heart, although the two characters are never seen in the same room together. Neither one has an in-person interaction with another human.

Casey navigates her adolescence by her lonely. Eventually, another video-maker, known only by his username, “JLB,” gets her attention by way of a disturbing video that would shake anyone to their core. In an intriguing creative decision, director Jane Schoenbrun allows us to see the man behind the “JLB” account. That man is played by Michael J. Rogers, a significantly older man, whose process of communication with the significantly younger girl feels like textbook grooming. “I’m worried about you,” he constantly stresses, and implores her to continue making videos of any changes she notices or feels in lieu of accepting the world’s fair challenge.

Know what you’re getting into if you decide to hit play on We’re All Going to the World’s Fair. This is a sparse, unnerving movie that goes on for long stretches prioritizing disquieting imagery with few lines of dialog, almost entirely discarding context. Your attention span might waver; I know mine did. This is a movie for the audience that spent many a sleepless night browsing creepypasta and other user-generated horror content. Where are Casey’s parents? Only her dad is heard yelling from downstairs at one point in the film. How does a man as socially inept as JLB live in such a lavish, suburban home? Schoenbrun’s approach elicits many questions. It doesn’t field many answers.

What is clear is that the film has an arresting energy when Anna Cobb is in on-screen. In her film debut, Cobb nails a look of innocence and loneliness that’s difficult to execute, much less fake. She resembles Elsie K. Fisher’s Kayla from Eighth Grade, although even more stunted socially. Two scenes have lingered in my mind since the credits rolled. One is bound to be the most disturbing dance sequence you’ll see all year. The other involves her precious stuffed animal, followed by her facing the consequences of her actions. Both left me with a noticeable feeling sadness that wasn’t easy to shake.

We’re All Going to the World’s Fair pivots from Casey’s perspective too often to be so engrossing on whatever changes she’s facing. For extended stretches, Schoenbrun will leave YouTube videos on autoplay, so to speak, most of which showing other people dealing with effects of the world’s fair challenge. The cleverness in these sequences is the way they weaponize the buffering symbol, toying with the audience as we clench, waiting for a black-haired demon to appear in close-up, blowing our speakers out with her demonic screams. But these videos feel disconnected and underdeveloped, even with Schoenbrun’s ancillary context that We’re All Going to the World’s Fair is about coming out and gender dysphoria. This is one of those films that’s more entertaining to discuss than view; far more rewarding to analyze and converse about than it is to endure, even at a slight 86 minutes. Giving the film’s final scene to JLB feels like a grave miscalculation given all the time we’ve spent with Casey. Ultimately, the world’s fair challenge is less than the sum of its parts.

NOTE: We’re All Going to the World’s Fair is now streaming on HBO Max.