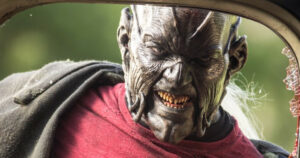 Quite possibly the only other third installment of a franchise that’s been talked about, teased, hinted at, set to go, abruptly stopped, and stuck in limbo as much as Jeepers Creepers 3 is the infamous Ghostbusters 3, the status of that film still remaining a mystery. Since the release of the second film in 2003, fans have discussed, through internet forums and gossip websites, about a third installment of Jeepers Creepers, the sleeper hit franchise that began in 2001.

The original was an unassuming horror film, offering chilling scares and a wickedly dark premise. The second film, for all its flaws, presented us with more mythology behind the central murderer – the hulking, winged Creeper. Since then, we’ve heard talk of a third film with the subtitle of “Cathedral,” which was unfortunately scrapped due to the idea’s datedness. There was also “The Creeper Walks Among Us,” another proposed continuation of the series, additionally burdened by many false-starts that fell-through due to issues with funding and casting.

14 long years later, Jeepers Creepers 3 arrives in the form of an initially planned one-night-showing on September 26th, 2017 that has now been extended to an additional showing on October 4th. The release is quiet, with potential to only be noticed by the die-hard fans who heard through word-of-mouth or by way of the internet. A good part of this is because distribution is hard to come when your name is Victor Salva and you’re a convicted pedophile, and the other half is how far removed the property is from the average person’s mind. If you were really desperate for a new installment in this franchise, like I was, you might be left mostly satisfied by this tardy sequel, but nobody can blame you if the project’s cheapness, infrequent scares, and unintentional comedy left you feeling discouraged.

The film is more-so made up of a barrage of characters Salva chooses to follow at random rather than particular storyline. The main family we see is the Brandon clan, led by the unstable matriarch Gaylen (Meg Foster), who grieves the loss of her son by farming with her grand-daughter Addie (Gabrielle Haugh). Addie has a icy friendship with the freckled local-boy Buddy (Chester Rushing), with whom she grows closer when the infamous Creeper (reprised by Jonathan Breck) returns after a 23-year absence to feast on new victims stranded in an empty hick-town. Two officers (Brandon Smith and Stan Shaw) are dispatched on the case, the latter being very familiar with the stranglehold the Creeper has had on many communities.

The vicious predator, with its transparent wings, black cloak, and green, reptilian skin, drives around in a clunker of a truck, rigged with booby-traps and weaponry, searching for humans it can use to regenerate its limbs and preserves its rich legacy. 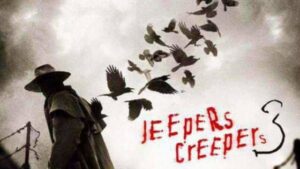 Salva’s occasionally slow-pacing and lengthy opening scene suggests a desire to stretch out a narrative that is already pretty linear, not leaving much to the imagination. One wonders what would’ve been in store had he simply went through with adapting the famous “Cathedral” narrative into a film, at least grounding the film and committing its story to revolving around a location. In its present form, Salva’s storyline feels a bit too free to meander around, never settling on a main character or giving us much of a reason to care about anyone in a meaningful sense.

There’s the mythology, something that is laced in the film in a rather inconsistent manner. Some of the mythology is actually revealing, but at the same time, Salva’s excitement works both ways. He seems to be wanting us to still remain in the dark as other sequels are planned, and a character’s line of dialog towards the end of the film sums up the overall strength of the mythology – “the Creeper comes back every 23 years to eat; that’s all we know.” The film is too spotty with the information it chooses to reveal to us.

Sprinkled in Jeepers Creepers 3 is strong tension, particularly when the film returns to its trademark location in the form of vast corn and wheatfields. Salva employs these vast, barren acres as fun playgrounds in which the Creeper can park his truck and toy with police officers using his famous battle-axe, throwing stars, and carved daggers. All of these remind you how the Creeper wasn’t a one-off monster with a cheap arsenal of weaponry. He was, and still is, a versatile devil, armed with the strength and physicality of Breck as a performer, with a sneer and sniff that shows a great use of sound despite noticeable production constraints.

If Jeepers Creepers 3 is hampered by anything besides some unintentional comedy in the form of Smith and Shaw’s facial expressions, it’s the limitations of its evidently meager budget. Funding has come from Myriad Pictures and distribution house Screen Media, with formal funding from MGM failing to materialize due to Salva’s troubling past. Deaths and car accidents are not shown on-screen for obvious reasons, large sums of money obviously rest in a few glaring set-pieces, and the overall feel of the film is made-for-TV/DVD rather than something that was destined for the big screen.

Through all its shortcomings, some admittedly due to what the wonders the passing of time does to one’s expectations, I did find some enjoyment in Jeepers Creepers 3. All of these films have been a tad different from their predecessor, and this one is no exception. It clearly wants to give fans something they can appreciate, it just doesn’t always know the best route. Perhaps the stumble comes before the regrouping and the alleged sequels Salva and company have planned will surprise us even half as much as the original did most of us back in 2001. If that’s the case, Jeepers Creepers 3 might be a small price to pay.

My review of Jeepers Creepers: Reborn