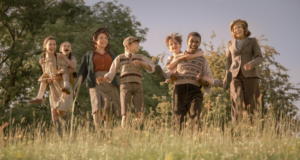 NOTE: The Railway Children Return is known as Railway Children in the United States. In order to differentiate it from the 1970 TV movie, and to remain consistent with the rest of the world, I’ll be referring to the film by its original title.

The name Railway Children meant nothing to me when I purchased a ticket to see it just a couple days ago. Further research tells me the film — known as The Railway Children Return everywhere but the United States — is actually a sequel to a 1970 British TV movie, which was based on the E. Nesbit novel. Obviously, I had no prior context going into this sequel, but I will say I was never lost.

The 1970 film was an episodic story revolving around a man imprisoned on phony charges of soliciting state secrets in 1905 England. As such, the Waterbury family’s children passed the time by watching the trains roll through the neighborhood, where they come-of-age at the center of a political firestorm. A G-rated family film, it appears that Lionel Jeffries’ film provided an innocuous gateway for children to learn about a period long ago, with mature themes tackled in an easily digestible manner.

The Railway Children Return fast-forwards to 1944, at the tail-end of World War II. This story starts at a train station in Manchester, where parents are making the heart-wrenching decision to send their kids to the Yorkshire countryside to keep them safe amidst Nazi bombings. I can’t fathom the difficulty and trauma for both parties. One mother sobs and pulls her child from the train at the last second. Another tells her daughter, Lily (Beau Gadsdon), a precocious young woman, “you’re a parent now” and to look after her younger siblings. Children raising children.

Lily boards the locomotive with her sister Pattie (Eden Hamilton) and her young brother, Ted (Zac Cudby). When they arrive in Yorkshire, ushered into the station like cattle where locals are free to inspect and adopt them, the three are initially unclaimed — looking like the last picks in a game of middle school dodgeball. They’re a package deal, who finally get taken in by Bobbie Waterbury (Jenny Agutter) and her middle-aged daughter, Ann (Sheridan Smith), the headmistress at a local school. That brings their litter of children to four, with Ann’s son, Thomas (Austin Haynes), also under one roof. The children are understandably homesick, but the tranquility of the countryside and Thomas’ plucky company keeps them occupied. At least until a bomb drops in the middle of the night.

And then they discover Abe (KJ Aikens), a young, wounded American GI on a “secret mission,” who begs for their help. His temporary shelter is a railcar at the Oakworth Station. Lily agrees to tend to his wound. Once Abe saves her from the aforementioned bomb, she knows he’s a good person caught in a bad situation.

The Railway Children Return is a bucolic little parable. Sun-kissed pastures and lush exteriors work overtime in casting a beatific glow over an otherwise ugly situation. It can get too precious at times. I prefer my war stories gritty, and had to remind myself more than a couple times that this is indeed a kids movie. Addressing it as such, this isn’t the 1970s, and I have my doubts about children (specifically American children) connecting to a story that’s so far removed from their reality. This is one of those kids movies that plays for the 50+ crowd. On that note, it’s competent entertainment.

Documentary filmmaker Morgan Matthews, working off a script by Danny Brocklehurst (who worked on the British version of Shameless), keeps things stable with dutiful pacing and a talented bunch of child actors. Beau Gadsdon is a real find, as is Austin Haynes, whose character in Thomas must come to grips with his coddled life in the face of have-nots who have experienced a lot more of the world than he has at this time. Sheridan Smith looks and operates like Olivia Colman; steadfast, commanding of the screen, and gentle yet firm as Ann.

Shortchanged is the story of Abe, so much so that KJ Aikens’ admirable performance can’t even levy its gravitas. The Railway Children Return underscores the rampant racism of the period, but it also posits the Brits as loving, welcoming individuals and Americans as hostile monsters. There’s a gray area in all of this Brocklehurst appears unwilling to reconcile. Abe’s story is told in fragments, and I left the theater feeling like Aikens and his character (the most interesting of the lot) deserved more screentime than he was ultimately afforded.

Apart from its desire to draw warm, fuzzy conclusions and cast a black-and-white aura over complicated problems, The Railway Children Return is ultimately striving to be a wholesome, good-natured family drama. It succeeds in being consistent in that pursuit. I’m not sure its impact will be anything close to that of the beloved BBC movie or any other adaptation that predates it, but after a while, you might find yourself feeling the warmth of the sunshine captured by cinematographer Kit Fraser enough to grin at its adequate execution and feel-good sensibilities.