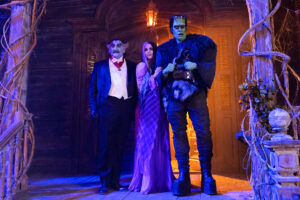 Rob Zombie’s The Munsters is a nearly two hour stroll through haunted house aesthetics and dad jokes, which when they hit, are guiltily funny. But that’s an occurrence too infrequent for an adaptation of a second-tier spooky family.

Look, nobody was groveling for a Munsters reboot. Zombie misses a golden opportunity to reimagine the material into something ala The Banana Splits Movie. Think about what that film did: took a dusty, mostly dormant Hanna-Barbera property and reinvented its characters as murderous animatronics. Even for all the hours I spent as a lonely only child watching syndicated sitcoms on MeTV, I changed the channel at The Munsters. They were neither as creepy and kooky nor as mysterious and spooky as another demented family. I have no pulse on the fanfare the Fred Gwynne-led sitcom harbors amongst boomers these days, leading Zombie’s decision to make this adaptation faithful — beyond his love for the original show — to be all that more questionable.

The Munsters opens on Dr. Henry Augustus Wolfgang (Richard Brake, most recently in Barbarian) and his dimwitted assistant Floop (Jorge Garcia) prepping for a great experiment: bringing a man to life using the flesh and prowess of deceased geniuses. Fate seems to be in favor of this plan when a renowned philosopher (Laurent Winkler) passes away, as well as his brother (Jeff Daniel Phillips), a terrible stand-up comic. Naturally, Floop extracts the wrong brain, and what comes to life instead is a lurching, Frankenstein-ed goon (also played by Phillips), who loves making the corniest jokes imaginable.

Dr. Wolfgang is beside himself when he puts the creature on display. Utterly swooning over his physique and his comedy is Lily (Sheri Moon Zombie), a ravishing vampire, who lives in Transylvania. Lily has subjected herself to numerous bad dates in hopes of meeting a good man. She finds him in the big lunkhead who becomes known to the world as “Herman Munster.” The two fall in love and rush into marriage at the dismay of Lily’s father, the Count (Daniel Roebuck). Herman predictably does something stupid and sells the family estate to one of the Count’s embittered ex-girlfriends named Zoya (Catherine Schell), resulting in the trio moving to America.

If you haven’t put it together yet, Zombie’s film is a prequel to the sitcom series. The Munsters don’t even move to Mockingbird Lane until the final 20 minutes of the movie. When they do, you sense some urgency and plot manifesting itself until you tap your remote and realize that the film is almost over. The Munsters is a cobbled bunch of loose-ends; an assortment of one-off gags that resemble a sitcom structure. As a work attempting to emulate the formalities of television — in its presentation, gratuitous use of obnoxious sound effects, and jokes that lead you to expect a canned laugh-track to make itself known at any moment — Zombie is faithful, albeit faithful to something that wasn’t particular good in the first place.

The movie is ultimately a mess. A rampant marathon of side-gags and goofball antics that don’t add up to a whole lot. There are positives to be found, however. The film finds some solid ground once Herman and Lily marry. Herman’s tense relationship with the Count leads to Roebuck delivering some pretty funny jabs — “Flat top fancies himself as a comedian” got me to laugh harder than it probably should’ve — and the cast is up to the challenge of donning layers of makeup and costumes in pursuit of channeling the absurd.

Zoran Popovic’s cinematography is tougher to analyze, however. It’s loaded with color, like a Spirit Halloween and a haunted house vomited all over Universal Pictures’ backlot, and it makes for one of the few times a traditionally black-and-white property was actually given an added boost with color. But like the show, it’s cheap-looking. Zombie would probably say that’s the point. But to stare at this film for a grossly long 105 minutes renders the craftsmanship a sore for sight eyes by the time the theme song plays and the credits roll.

The path of Zombie’s The Munsters has been categorically strange from the jump. When Zombie’s plans came to light, our minds raced with what kind of Devil’s Rejects-esque depravity he could bring to such a squeaky-clean IP. Then, he revealed it would be PG. Then, it was said to be released on Peacock…. and then Netflix, with Zombie reacting to the negativity surrounding the trailer by saying that people ran with rumors (news outlets reported Peacock as the platform on which the film would be released; this whole charade had me feeling like I was victim to the Mandela effect). When the clumsy and off-putting trailer dropped, I noticed something I should’ve caught a long time ago: the film is a product of Universal 1440 Entertainment, the studio’s direct-to-DVD/streaming outfit responsible for such needless sequels as Benchwarmers 2: Breaking Balls, Jingle All the Way 2 with Larry the Cable Guy, about a half dozen Death Race and Jarhead sequels, and whatever in God’s name was Woody Woodpecker in 2018.

Had I realized The Munsters was going to be a production from a studio division designed to keep IP alive long enough for the copyright to stay in place/relevant, I would’ve never bothered to get excited about it in the first place.

NOTE: The Munsters is now streaming exclusively on Netflix.