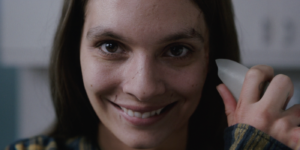 I’m not one to offer “trigger warnings,” but I will say, if you have personally experienced mental illness or are close with somebody who has, Smile is going to be a rough sit. I emerged from the theater glum, and I write this review still in a fog of emotions I was not prepared to confront. However, this wouldn’t be the case if Parker Finn’s directorial debut wasn’t such an unnerving, well-acted thriller.

Expanding upon his short film, Laura Hasn’t Slept, from 2020, Finn’s film stars Sosie Bacon as Rose Cotter, a therapist working at a hospital tasked with treating patients suffering from severe mental turmoil. She’s been working 80 hour weeks for months on end, and hasn’t slept much at all. So, she herself is not in the right mental state to deal with a young woman, who tells her about an entity that’s been following her for days. Everywhere this woman goes, she sees strange individuals demonically smiling at her. In a matter of minutes, the young woman starts grinning to herself before violently committing suicide as a helpless Rose watches in horror.

Rose’s own mother killed herself when she was 10-years-old, and this instance has ripped open scars that still haven’t fully healed. Shortly after this, Rose begins seeing the same smiling faces of which her patient warned her. It affects her work enough that her superior (Kal Penn) demands she take a week off of work. Her fiancée, Trevor (Jessie T. Usher), is perplexed by her increased paranoia. Rose winds up doing her research, and learns that those who experience this haunting don’t have long to live before it consumes their being. She decides to fight it, albeit with harrowing consequences.

Horror through the decades can be summed up more succinctly and accurately than most other genres. In the 1980s, the slasher genre took off, as well as the rise of sequels. The 1990s had enough material to work with that the focus turned to self-aware horror movies that evoked light-hearted comedy. The 2000s ushered in the torture porn era, coinciding with stories from Guantanamo Bay and tactics used on presumptive terrorists. In the 2010s, and even the still-young 2020s, horror has been hyperfixated on trauma. If you’re unsure of what a contemporary horror film is about, ponder the word “grief” and you’re probably on-target.

Smile confronts mental illness in such a way that feels vivid and realized, moreso than the heavy abstraction we’ve become accustomed to, most notably in films under the A24 umbrella. Finn remarkably arrests the audience in Rose’s fraying mental state, which is frighteningly rendered by her frequent panic attacks and her disorientation. While not beyond the occasionally humorous one-liner, Finn is dead serious when it comes to articulating Rose’s weakening grip on reality.

A film that shows its influence, Smile recalls The Ring in its loose “seven days to live” concept, and It Follows insofar of its personification of the abstract as an invisible virus that spreads through nefarious circumstances. Although undoubtedly coincidental, the film’s premise, along with its climax, lightly recalls Alex Garland’s Men from earlier this year. Garland examined the idea that toxic masculinity and trauma was passed down by men like an heirloom, from generation to generation. Finn’s film subverts the idea of a smile being infectious. Here, he takes something ordinarily so welcoming and innocent and posits it as the lasting image of a curse.

It’s been a hot minute since jump-scares were this effectively executed too. Finn knows how to trick audiences into letting their guard down, only to be blindsided by a strong jolt. Theatrics aside, perhaps the element of Smile that is liable to get under your skin is the fact that this sort of psychosis can theoretically afflict anyone. Take it from someone who has seen mental illness up close: it’s as real as a broken leg and it’s a living nightmare for those around it. I can’t imaging suffering from it.

Parker Finn, along with Zach Cregger, whose film Barbarian just released to rave reviews, asserts him as next-in-line for horror directors looking to make falling asleep a little more difficult. I’m here for it. Smile stands on its own in a crowded year of strong horror films. I know that because it’s one of those rare great movies I do not plan on watching again.