Dir. Will Speck and Josh Gordon 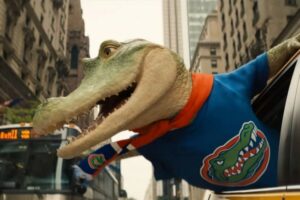 Lyle, Lyle, Crocodile is based off the 1965 children’s book by Bernard Waber. I can’t explain why, but I felt a fledgling limerick come to mind while watching it this afternoon. Allow me to summarize the film as succinctly as I can, while attempting to do the storied poetic form justice:

Lyle, Lyle, Crocodile goes on for a while.
At times, its length is a trial.
But with its energy high, and the croc a cute guy,
you might find the film somewhat worthwhile.

Shawn Mendes’ pipes are a blast.
The concept is embraced by the cast.
Bardem breaks a sweat, Wu woos, you can bet,
and in the end, that’s all you can ask.

Lyle, Lyle, Crocodile is a far-cry from Paddington, the series it’s trying to emulate. It lacks both the silly sophistication and authentic whimsy of that franchise. Let’s be honest, too: having teen popstar Shawn Mendes voice the belting crocodile is a move that feels every bit as corporate as a suit-and-tie, closed-door boardroom meeting. Mendes is responsible for a lot of songs you hear on the loudspeaker at Kohl’s or firmly stuck in rotation on your region’s CHR radio station. It’s inoffensive stuff, but you struggle to remember the song titles (I play his music on the radio on a daily basis and even I struggle to name more than “There’s Nothing Holding Me Back”).

Mendes voices the titular Lyle, a magical croc who can’t talk, but can sing beautifully. It’s Hector P. Valenti (Javier Bardem), a charismatic magician, who finds him at an exotic animals shop following a failed audition for a TV talent show. In that moment, Hector meets his muse/sidekick and Lyle finds his home.

Hector sees dollar signs and stardom in Lyle’s cute sneezes and reedy voice. Once he’s fully grown, Hector takes him on a headlining tour. However, as soon as the curtain rises for their first duet performance, Lyle is paralyzed with stage-fright; the two are laughed off in ignominious fashion. Fast-forward almost two years, and the Primm family — comprised of Katie (Constance Wu), a cookbook writer; Joseph (Scoot McNairy), a math teacher; and their nervous, lonely son Josh (Winslow Fegley) — move into Valenti’s old Manhattan brownstone, where Lyle still resides in the attic. It’s Josh who first discovers and befriends the croc, but in no time, all three members of this nuclear family realize that a scaly beast who can perfectly make both Top 40 tunes and Elton John classics sound buttery is just what they needed in their stuck-in-neutral lives.

Their only obstacle is Mr. Grumps (Brett Gelman), the miserable narc who lives downstairs with his snippy Persian cat, Loretta. Grumps makes the Primms well aware he has lawyers on speed-dial should he hear even slightly loud footsteps from above.

This is material ripe for a smoldering trainwreck. The spirited energy brought forth by the cast saves a lot of it. It’s fair to assume the ordinarily stern, gruff Bardem has never looked more alive on-screen than he has playing an eccentric magician. Bardem throws himself into the role of “The Subpar Showman,” if you will, while Constance Wu brings that effervescent breed of enthusiasm that makes her very presence illuminate the screen. Fegley’s Josh and Lyle have amiable chemistry, which is underscored by an early scene on a rooftop, and later when Wu’s Katie is encouraged by Lyle to break rules and loosen up.

Lyle, Lyle, Crocodile has a lot in common with Clifford the Big Red Dog — the main comparison being this is material born and bred for animation as opposed to a hybrid of reality and CGI. Given the track record of the genre, anything more than mediocre is something of an accomplishment. But Lyle, Lyle, Crocodile is comfort food for the soul; light on its feet and primed to at least satisfy the youngsters, as the film’s concept has unexpectedly aged well enough to stay adjacent to the TikTok era in which we live.