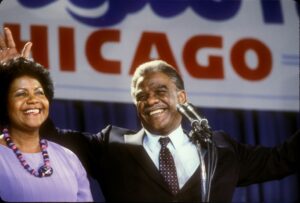 Growing up in the Chicagoland area, I could sense that the fruits of Mayor Harold Washington’s labor were still revered decades after his term (1983 – 1987). The first Black Mayor of Chicago, Washington has a library, a cultural center, a park, and a community college named after him. His wide-eyed, infectious populism made him a hero to the Black community, and a widely popular figure as a whole.

Given these details, it’s a little surprising that a documentary on Washington’s ascension, time as Mayor of Chicago, and lasting legacy hasn’t come to fruition until now. Better late than never, I suppose, as Punch 9 for Harold Washington is among one of the finest films I’ve seen all year.

As richly articulated as this story will be for native Chicagoans, nearly everyone would benefit from seeing it comprehensively and linearly told. Documentarian Joe Winston uses familiar elements — archival footage, news clips, engaging graphics, one-on-one interviews, and seldom seen excerpts of city council meetings — to illustrate a revolution in Chicago politics that led to the election of the city’s first Black mayor, along with the thinly veiled racism and long overdue representation that came as a result. 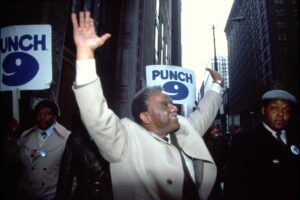 Punch 9 begins by illustrating Chicago’s political landscape from the mid-1950s through the mid-1970s, dominated by Mayor Richard J. Daley, a proponent of a segregated city. Following Daley’s death and successor Michael Bilandic was Jane Byrne, a woman who built a campaign on courting the Black vote only to abandon the same individuals by upholding the status quo once she got into power. Disgusted by the betrayal, Black Chicagoans knew the only way they’d be able to get some sort of improvement to their neighborhoods, dilapidated housing projects, and experiences with the Chicago Police Department was to elect a Black mayor. Enter Harold Washington.

Washington was a member of the Illinois State Legislature through the mid-1970s. Running against incumbent Byrne and Richard M. Daley, the elder’s son, Washington was given little chance to win the Democratic primary. Some amazing archival clips show us how Washington came to lip-spar against the non-answers to serious questions from his colleagues. His affable demeanor, populist language, and authentic approach to a crowd that either loved or reviled him made Washington a legitimate candidate overnight.

On that predictably frigid Chicago day in February 1983, 80% of registered Democrats flocked to the polls. Washington emerged victorious to win the Democratic nomination for Mayor with 36.7% of the vote. In Chicago, that means you’re a shoe-in to become mayor, as there’s a better chance of successfully picking fly crap out of black pepper while wearing boxing gloves than a Republican mayor being elected in the Windy City. But the mayoral election of 1983 was different. With the Democratic candidate being a Black man, the white, Republican candidate, Bernie Epton (who won the nomination with a paltry 11,000 votes), became significantly more attractive to the Democratic machine, who would endorse him almost immediately.

Epton, a Jewish man who marched for Civil Rights, essentially became the apple of white supremacists’ eyes, as well as who those who couldn’t stomach the idea of a Black man being the face of Chicago politics. TV ads provided the dog whistle: “Epton for Mayor, before it’s too late.” Epton came as close to winning the title of Mayor of Chicago than any Republican in the last several decades, with over 621,000 votes. Washington was no less victorious, garnering over 666,000.

While the first half of Punch 9 deals with Washington’s rise to the nomination and the bitter election cycle that followed, the second half deals with his term in office. Washington’s first term as mayor was defined by the “Council Wars.” 29 of the 50 aldermen voted against Washington, leaving only 21 on his side. Let the stonewall begin. Galvanized by Alderman Edward Vrdolyak, the 29 members, known as the “Vrdolyak 29,” blocked Washington’s legislation, even if it meant hurting voters in their own district. No less, Washington persisted, frequently speaking of a multi-decade run like Daley. That was until he suffered an unexpected and fatal heart attack on November 25th, 1987, as bleak of a Thanksgiving as you could picture in any major city.

Punch 9 for Harold Washington is a riveting film. Its humanization of a large political titan, who remained accessible and transparent throughout his all-too-brief run, is gripping from the first time Washington appears on screen. His trademark rallying cry, through his raspy voice, might find itself engrained in your memory: “You want Harold?!? You got him!!!” Chicagoans, and those like me, who grew up outside of the city limits, are raised to loathe our politicians, toss political literature, and wax cynical about the state of our city’s politics on a daily basis. I, for one, am amazed at how much I like and embrace the current Governor, J. B. Pritzker. That said, Washington was a different breed. It might be a cold day in hell on a warm day in the Windy City before we see another one like him.