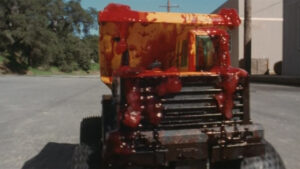 Trucks is so many things at once, and none of them particularly good. This is a Z-grade Tremors knockoff in both setup and execution, to the point where even the generic Nowheresville setting could easily be repurposed to look like Perfection, NV.

What’s laudable is this schlocky TV movie is less competently made and significantly less entertaining than the other adaptation of the Stephen King novella, which was directed by the author himself on a multi-week coke and booze binge. Regardless, it’s hard to stay sober watching this one.

Based on King’s novella “Trucks,” which was the basis for the Emilio Estevez “vehicle” Maximum Overdrive in 1986, the film starts on an inexcusably bad and indistinguishable note. In the span of two minutes, a junkyard operator calls for his two dogs, a rust-bucket truck strangely rebuilds part of itself, and without a driver, speeds towards the man before driving through his home and killing him.

So, trucks have become sentient in this world through means never clearly outlined. Is it aliens? The town is located near Area 51. Does it have anything to do with a strange chemical spill sporadic TV bulletins on otherwise static-ridden televisions show at random times? Could be. You never get clearly defined answers. Just poorly defined characters.

Time for roll-call: we have the softspoken, level-headed Hope (Brenda Bakke); a concerned single father named Ray (Timothy Busfield) and his son, Logan (Brendan Fletcher); a distant father (Roman Podhora) trying to rekindle a relationship with his tomboyish daughter (Amy Stewart); and a few other interchangeable denizens. These characters are hastily introduced before their shuffled inside an elderly man’s diner to take refuge from the trucks, once they all begin unleashing their wrath.

I’ve said before that a good movie can come from almost any premise. King’s 1973 short story — which was originally published in Cavalier magazine before being part of his anthology Night Shift — might be the exception to that rule. The idea of trucks coming to life is one that likely plays better when left to the imagination than seeing it executed on the big screen. Maximum Overdrive was lucky to fall into the category of being “so bad, it’s good,” marked by some rigs with personality and a committed performance from Estevez. Trucks lacks a shred of charisma, so much so that even when a Tonka truck successfully reams itself into a postal worker’s cranium, killing after several successful vrooms, you can’t help but roll your eyes that the film stooped so low.

While a film about sentient trucks is already divorced from the burden of logic, some worldbuilding would’ve at least been admirable. Screenwriter Brian Taggert can’t settle on any specific rules by which to play; consequently, anything goes in Trucks. A Tonka truck can somehow bash someone’s brains in the same way a vacuum in a chemical truck can turn on and inflate a hazmat suit, so that some unseen force can take an axe and bludgeon two workers. It’s nonsensical, even by the standards of the source material.

There have been so many lackluster adaptations of Stephen King novels/novellas in the past, but Trucks is so especially brutal, its ignominious status still feels too high.

NOTE: As of this writing, Trucks is now streaming on Amazon Prime Video, Freevee and Tubi, free of charge.