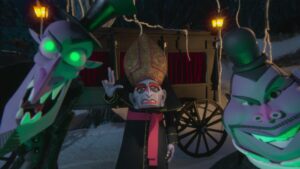 It’s good to have Henry Selick back, even if his return only prompts another lengthy hiatus. Animation is better when stop-motion is prevalent, and Wendell & Wild — Selick’s first feature since Coraline in 2009 — masters towing the line of being both creepy and silly enough to earn the “horror comedy” billing. Jordan Peele as cowriter assures there’s more than meets the eye. Admittedly, there is a lot on the table here, and it’s overstuffed at times, but it’s so great to look at too that I mostly forgave its biggest sin.

The titular characters are demons, voiced by Keegan-Michael Key (Wendell) and Peele (Wild). The tone and humor gives this a kid-friendly Key & Peele vibe that will, I presume, be appreciated by their adoring fans. The demons, however, haunt a young woman named Kat (voiced by Lyric Ross). Her parents died in a car accident that she blames on herself. She’s crippled by a panic attack when she travels on the bridge where it happened, on a bus en route to a boarding school run by a nun named Helley (Angela Bassett). She can’t even fathom being remotely kind to the fellow children; she just wants to be left alone.

The Catholic boarding school is run by Father Bests (James Hong), who is feeling the heat from an evil business empire that craves to buy the property and turn it into a for-profit prison. Enter Raúl (Sam Zelaya), another outcast at the school, who befriends Kat despite Kat insisting they’re not friends because nothing good happens to those who get close to her.

Wendell and Wild come into play when the focus is on their own underworld, which is essentially Hell, except run by Buffalo Belzer (Ving Rhames). Belzer orders the two dolts to bring the dead back to life by way of a tube of what looks like moisturizer. Wild enjoys eating and getting high off the cream. The two choose Kat as a “Hell Maiden,” and give her the insidious ultimatum of bringing her parents back to life in exchange for her help in appeasing Belzer.

Indeed, we have yet another film revolving around grief and trauma, two themes that would be even more tired if we all didn’t personal harbor torment over one or the other (or maybe both). But there’s two elements within Wendell & Wild that make Selick and Peele’s handling of the material feel different. For one, Kat seldom shows weakness. She has a brash exterior, and assumes the title of “Hell Maiden” once given it with all the tenacity she can muster. Ross makes her a character that isn’t your archetypal strong woman/rebel child cliché.

Secondly, Wendell and Wild aren’t the villains of the story. They’re just devious enough to be evil but also just stupid enough to mess the whole operation up, which gives them a lovable quality (and enhances the Key & Peele-feel of the project). The real villains are those who want to profit off of those who have fallen on hard times. The idea of making the prison industrial complex the villain in a kid’s movie might be a bit on the nose, but at the same time, it’s not a tech billionaire, blessed so.

The aspect that holds Wendell & Wild back from greatness is the problem with most animated features in this current climate. They’re too damn overstuffed with plot. I don’t need to know the origins of every supporting character, much less have them be developed if they’re inessential to the plot. Moreover, the fact that Kat doesn’t make the aforementioned deal with the demons until the 45-minute mark is almost criminal, given it’s the crux for everything that happens from that point forward. This is a crowded movie, given life thanks to its gorgeously haunted animation and talented voice cast. Selick and Peele — both filmmakers with a lot on their minds in different ways — needed to let the visuals do the storytelling as opposed to letting their propensity for narrative depth guide a story that’s ultimately pretty simple.