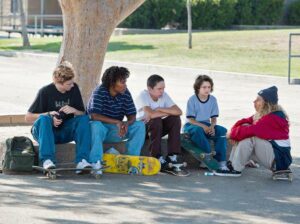 As the summer begins and the nights grow longer, 13-year-old Stevie (Sunny Suljic, who most recently starred in The House with a Clock in its Walls) finds himself with nothing much to do. His homelife is dreary, as he lives with his older brother, Ian (Lucas Hedges), who routinely beats him up and not in the playful way, and his young, single mother (Katherine Waterston), who struggles to handle both of her boys as they drift away from the nest. It’s 1996 and Stevie sees all the cool kids are rocking skater gear and taking their boards out of the garage, so he decides to take up the hobby. He takes some serious spills and falls out on his driveway before he ventures down to the seedy side of L.A. to pay a visit to the local skate-shop. It’s there where he meets a plethora of characters who assure his summer will be a memorable and eventful one.

Time for the roll-call: there’s Ray (Na-kel Smith), the shop’s only employee, who dreams of “going pro” and linking up with professional skaters in order to obtain a sponsorship deal, “Fourth Grade” (Ryder McLaughlin), who has filmmaker dreams as he always seems to be recording everything his friends are doing, and whose name reflects his perceived low-IQ, Ruben (Gio Galicia), a pugnacious boy with a similarly sad homelife like Stevie, and “Fuckshit” (Olan Prenatt), arguably the most entertaining of the group — the meaning behind his name I’ll leave you to discover for yourself. The gang invites Stevie, whom they nickname “Sunburn,” to tag along with them, and before long, Stevie himself popping ollies, Mollies, and chugging 40oz, and discovering life’s greatest mysteries (like a woman’s vagina is “way lower” than he expected).

The boys aren’t good influences on Stevie, as any rational person can tell, but they provide him an outlet to be himself, whoever that is. Ray, who is always good for a word of advice, tells him that he can take the hardest hits of anybody he’s ever seen, and offers a pithy advice-pill for him to swallow: if you seen the shit inside other people’s closets, you wouldn’t want any of their shit over your own. Beyond that, the boys aren’t very good influences on each other either, as they find ways to get into trouble. They skate, drink, and loiter in open parks all across L.A. until the cops come, taunt a hapless security guard (played by comedian Jerrod Carmichael in a hilarious performance), and brush off almost any moment to take accountability for their actions as they quietly hope the situation will result in something “cool.”

This is Mid90s, an uproariously funny yet sad, unsettling look at the counter-culture created by underprivileged youths in an area well-known for its extravagance and limitless possibilities. It’s the directorial debut of Jonah Hill, and though it’s Hill’s first outing, it feels distinctly a product of his mind, energy, and humor. Hill’s fast-paced picture isn’t so much a conventional movie as it is a scrapbook of the 90s as remembered by someone who was 13, like Stevie, the year in which this film takes place. Mid90s is also clearly influenced by the likes of Larry Clark, whose films Kids, Ken Park, Bully, and Wassup Rockers are among some of the rawest meditations on teenagers I’ve yet to see, along with the Slacker aesthetic of Richard Linklater and the conversational banter of Kevin Smith.

Though not quite as unfiltered and as edgy as Clark, Hill — who also wrote the film — does a fine job at merging the hilarious with the harrowing. While engaging in the way he makes the entire picture a good time, he’s careful to illustrate the obvious danger in which these kids often put themselves. Consider the scenes where they’re all piled in a Trailblazer and Stevie marvels at the fact that he’s in a vehicle without a parental figure or someone much older than himself. Or moments where tensions boil over between Stevie and Ian shortly after his older brother is confronted is by Fuckshit, a telling instance that shows the young boy that his sibling is not nearly as tough as his earrings, gold chain, and Nas shirt make him out to be. Hill always keeps the stove on and the pot boiling, even amidst the camaraderie, which is just short of being nonstop, but he, in a way, is also cool in the way he doesn’t seem to care too much about overplaying his hand.

I won’t make the bold claim that Hill is a great acting coach for obvious reasons, lack of experience behind the camera being the main one and the fact that I’m not sure these young men needed much mentoring on how to sink into their characters. That’s not a knock on Hill; it’s a testament to the strength of the young talent on display, the likes of which as good in any movie I’ve seen since It. Olan Prenatt is the scene-stealer here, his wavy hair and laidback line-delivery turning a potential caricature into a troubling tyrant, while Na-kel Smith shows good poise in dramatic moments. Suljic, who had flashes of ability in Yorgos Lanthimos’ creepy Killing of a Sacred Deer last year, also does a good job being an impressionistic lead; someone we can read into by his actions and wide-eyed attentiveness just as enjoyably as when we watch him say the darnedest things. Lastly, Lucas Hedges continues his string of roles as complicated teenage boys, which started with his Oscar-nominated performance in Manchester by the Sea and culminated with Three Billboards Outside Ebbing, Missouri and Lady Bird. Here, however, he’s absolutely terrifying as a boy who has serious rage issues. The way Hill captures the blows he inflicts on Stevie’s Suljic is at times deeply uncomfortable.

Such is the level of rawness you should expect from Mid90s, which I will again restate as a film that is both uproariously funny and yet sad and unsettling. At only 80 minutes long, it flies by at what seems like hyper-speed; I swear I was ready for another 45 minutes when the credits rolled. Its pacing and quickness is a lot like a music video and I mean that in the most sincere, complimentary way possible. If MTV was still around, this would be a staple movie for the network alongside 8 Mile, Roll Bounce, and Jackass.

My review of Stutz