All Quiet on the Western Front (2022) review 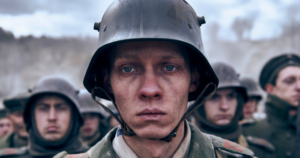 Even the most astute shots and elegantly choreographed pans in Edward Berger’s adaptation of All Quiet on the Western Front — the third, if you’re keeping track, after the Pre-Code Lewis Milestone film from 1930 and the Richard Thomas/Ernest Borgnine-led one from 1979 — are bleak as hell. Such is the case with war. It was in 1930s Germany when the Erich Maria Remarque novel was banned and burned in the Nazi-controlled country. Now, German filmmaker Berger faithfully captures the antiwar message of Remarque while standing out in a crowded genre, which has given us some gems in recent years.

Deserving of the same praise 1917 and Fury received upon release, Berger’s All Quiet on the Western Front opens with a dusky landscape shot of 1917 Europe. It’s the calm before the storm we all know is coming. Before all the carnage, chaos, bombs, surprise kills, fires, screams, blood-splattering, and hopelessness, we at least get a glimpse of a pink European sky and a slow-rolling fog. It’s tranquil, but it doesn’t last. It never does. Berger and cinematographer James Friend make their presence and craftsmanship known early with this amazing shot.

The focal point of the story is 17-year-old Paul Bäumer (Felix Kammerer), who, along with his school buddies — Albert (Aaron Hilmer), Franz (Moritz Klaus), and Ludwig (Adrian Grünewald) — all enlist in the Imperial German Army. They were sold on the promise of prestige and valor. All it will cost them is their lives. Before long, that aforementioned pink sky evaporates into ostensibly frozen clouds, casting an overcast grayness on the grassy planes below.

Berger’s film is one of moments. Consider when Paul gets his new uniform from a commanding officer. He inspects it and sees that the nametag doesn’t bear his name. “This already belongs to somebody”, he innocently tells the officer. “Yeah, it was too small for him”, the officer says, lying through his teeth. “Happens all the time”. 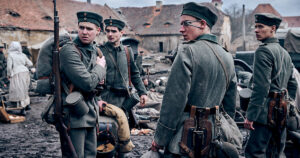 One of few happy moments comes after Paul and his trenches buddy Kat (Albrecht Schuch) successfully steal a goose from a French family’s farm. Back at camp, they cook it up and eat it, singing off-the-cuff wartime songs while indulging in their feast. Another one of those moments comes when one soldier offers the others, including Paul, a sniff of his girlfriend’s panties. “This woman probably showers twice a day”, one remarks. These occasional moments of humor cut through a perpetually gloomy glimpse into the brutality of war. We are primed to meet these new faces as soon as they’re introduced. But as Roy Orbison once said: there won’t be many coming home.

All Quiet on the Western Front won’t blow you away with a new story. Few war films do that, given the oversaturation of the genre. It might, however, do so with its aesthetics. As mentioned, Friend’s cinematography works hand-in-hand with Berger’s framing. Berger favors long-shots that rob the soldiers of their individuality, or dwarf them amidst a barren landscape of mountains, ranges, shacks, and trenches. Friend doesn’t obscure details in these shots. Being that many of them last long enough to be called medium takes, we can appreciate the full scope of vision we’re afforded. We can even note almost every brick in a given building despite being a few dozen paces away.

The film follows Paul and his comrades as they try to gain some ground on the foreboding Western Front. Several sequences send us into the trenches where all hell can break loose at the drop of a hat. This is a dirty movie in the regard that it sends you into the muck of the trenches amidst torrential downpours. During the second half, it’s rare to see any soldier whose face isn’t caked with dirt that’s now morphed into clay. Fear frozen into their eyes, some close-ups scarier than any thriller. One boy cries for home. Another says this isn’t at all what he expected. How could it be? If the recruitment posters or pamphlets showed any of this, the doors to the offices of the Imperial Army would be bolted. 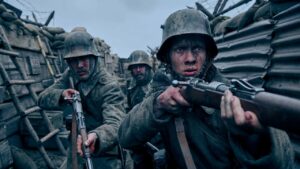 Berger’s screenplay (written with Ian Stokell and Lesley Paterson) does stray from source material in order to allow us time with the higher ups of the German Army, who sit in their elegantly decorated train cars and discuss future plans. Daniel Brühl (also producer) plays a German minister imploring French officials to consider a ceasefire so as to prevent countless more soldiers from dying. The French General (Thibault de Montalembert) has his terms, but they come with the price of decimating Germany’s resources and authority as a governing body. Look what followed after World War I.

With every cutaway to these diplomatic meetings, the eventual cutback leads to another long stretch of war. Germany looks hopeless against the much more equipped French Army, and the bodies continue to pile up at unsustainable rates. All Quiet on the Western Front is not an enjoyable two and a half hours, per se. It is, however, an immaculately curated epic that distinguishes itself in a crowded genre, with an appropriate level of realism and a faithful articulation of Remarque’s themes.

NOTE: All Quiet on the Western Front is now streaming on Netflix.