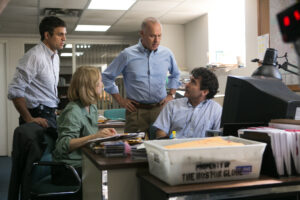 Spotlight‘s pervasive casual attitude and laidback presentation as a film almost effectively undermine two things – how uniformly solid the acting is all around and how terrific of a film this really is. Reminiscent of Danny Boyle’s Steve Jobs last month in that it’s a film that focuses on a lot of decidedly smaller, human moments that make up the entirety of the project, Spotlight is a film that, unless you really look at it from various angles in its acting, storytelling, and pacing, you might mistake it for just another drama in a sea of adult entertainment this holiday season.

The film revolves around The Boston Globe newsroom, specifically the Spotlight team, a division of about four field reporters who choose a topic apart from a great deal of media attention and devote months of investigation in order to give an elaborate, in-depth story on it in a future paper. The team is comprised of Walter “Robby” Robinson (Michael Keaton), the veteran of the group who often acts as the leader, Michael Rezendes (Mark Ruffalo), a young, persistent journalist, Sacha Pfeiffer (Rachel McAdams), the woman responsible for undergoing difficult interviews that largely involve cold-approaching people, and Matt Carroll (Brian d’Arcy James), a family man who does a great deal of the team’s research.

It’s 2001 and the dawn of the internet is finally showing an effect on newspaper readership; during this time, like now, many journalistic empires need to find a way to continue to boast that title whilst maintaining success. In response to the paper’s slumping readership despite being acquired by The New York Times years earlier, Marty Baron (Liev Schreiber) is brought into make adjustments where needed. Upon arrival, he more or less directs the Spotlight team to focus their attention on the Boston archdiocese and the prevalent cases of molestation and sexual abuse involving priests and minors in the Catholic Church. Once the group begins to dive in and investigate, they realize the scope of the case is much greater and more impacting than any of them imagined, and also learn that The Globe had a great deal of this information at their disposal years ago but sat on their hands instead of covering it.

Spotlight takes a fascinatingly relaxed approach to this story, focusing on the breezy conversations and etiquette in a newsroom. Everything from water cooler discussions about cases, blunt conversations with rolled up dress-shirt sleeves in front of computers, and tireless field reporting are shown in the film, detailing the sometimes thankless process of investigative journalism. Boston Globe’s Spotlight team proves that, while investigative journalism has the ability to shake an entire nation, it’s also criminally underfunded, much like watchdog journalism, which both find themselves largely segregated on the secondary sources of the internet in the present day. This sort of very nonchalant vibe does wonders when Spotlight inevitably turns emotional, specifically when Michael and Sacha find themselves interviewing former victims of priests who have lived with the hell and uncertainty of their troubled childhood experiences.

Much like a well-written news article, Spotlight has the ability to infuriate in a manner that doesn’t derail the project into manipulative territory. A large portion of the film is devoted to the meticulous practices of contemporary journalistic investigations in a way that really shows the talky, but elaborate process of interviewing. Americans, many of whom can’t go a day without picking up a newspaper or reading a webpage or an email telling them the day’s events, often do not consider what goes into the stories we read and take for granted each day; “Spotlight” not only showcases the impact the stories can have, but also shows the most important parts of the newsgathering process in a way that is gripping without being bombastic.

The lax attitude and approach writers Thomas McCarthy (also director) and Josh Singer almost disguises the attention to acting and character development on display here. Michael Keaton hits another home-run with his human portrayal of Walter Robinson, largely because his character, unlike Riggen Thomson in Birdman last year, is never too dramatic or out of his own element. Meanwhile, Mark Ruffalo does a great job at being both a younger journalist and a likable one; not a smug nor self-serious jokester who ostensibly stumbled into the job as generic Hollywood roles would traditionally have it, Rachel McAdams delivers some of the strongest and most compelling work of her career thanks to her realistic portrayal of her character, and the same goes for Brian d’Arcy James. Out of all of them, however, perhaps Liev Schreiber gives one of the quirkiest performances, as his character is so stiff and intent on not being invasive that he, as an actor, still manages to be a strong presence on-screen, as well.

Spotlight doesn’t look to shortchange any of these characters nor play them to predictable types. Walter isn’t the kind of veteran journalist who screams and shouts whenever he doesn’t get his way, Michael isn’t the lackadaisical bloke who doesn’t take his work seriously, Sacha isn’t the ditsy journalist who needs to constant be reminded her job comes with a big responsibility, Matt isn’t a stiff-as-a-board moralist, and Marty isn’t the evil corporate downsizer looking to corrupt the integrity of The Globe (not openly, at least). None of these characters pander to conventional archetypes and perhaps that, much like the strength of the film’s approach, will be lost upon audiences who do not actively notice it at first.

This is a film so elegantly directed, written, and layered that I’ve almost forgotten to really address the reason for the film, which are the horrifying cases of molestation in the church. McCarthy and Singer handle the more heartwrenching scenes of the film with appropriate care and, most importantly, respect by not milking them for cheap sentimentality. Their efforts to quietly impose the significance of these scenes, germane with Howard Shore’s very subtle and melodic score, work to make the film deliver a message that doesn’t feel like it’s ringing the bell of a boxing match in efforts to get us to pay attention. Once again, it’s so low-key you’ll almost miss it.

Finally, McCarthy directs Spotlight with humble interjections of style; consider a key telephone interview being the subject of a medium-length take that has all the members of the Spotlight team hovered around a phone. McCarthy’s camera focuses on the telephone before slowly pulling back the camera to reveal the entire team, and then pulling even further back down a hallway to minimize the size of the team. This interview really establishes the scope of the Catholic Church’s unforgivable crimes, and this effort to showcase how small this team is in the face of this huge issue is a nice way to capture the film with an unwritten thesis, and investigative journalism in a nutshell. Everything in Spotlight that’s so brilliantly done is so quietly captured that it’s almost as if it’s designed for you to miss. With that, I’d advise you to watch it like you would read a gripping news article: with intent to focus and read between the lines, even the headlines.

NOTE: Spotlight is available to stream on HBO Max.