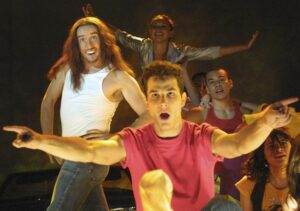 When Focus Features acquired Hamlet 2 out of Sundance — winning a surprisingly competitive bidding war in the process — the studio probably shelled out $10 million in hopes they had snatched the next Napoleon Dynamite. They staked their dollars on a film they hoped would be something of a cultural touchstone for that year and maybe even beyond. What they bought, however, was not only a box office bomb in August 2008, but nothing more than an amusing, offbeat little film with more unrealized potential than realized.

The film gets its title — an elite title, I’ll add — from a play by Dana Marschz (Steve Coogan), a failed-actor-turned-high-school-drama-teacher in the hellhole of Tucson, Arizona (the film’s portrayal, not my words). While Dana has managed to inspire two teacher’s pets, the majority of his class couldn’t give a damn about him nor the oft-profound nature of theater. These days, he derives most of his material from famous Hollywood movies, like Erin Brockovich, productions that get slaughtered by the student theater critic for the school paper.

But in Dana’s mind, he’s John Keating, and these students are just starved for inspiration. He decides to put on an original play. Enter “Hamlet 2,” a musical sequel to Shakespeare’s masterwork, with material that is sophomoric and inappropriate for school grounds. This leads to the high school principal (Marshall Bell) putting the kibosh on it early into production. Then comes Cricket Feldstein (Amy Poehler), an ACLU lawyer who backs Dana in efforts to keep the show going. Not on Dana’s side is his long-suffering wife, Brie (Catherine Keener), who is openly ashamed of her husband’s eccentricities, along with his inability to conceive. She spends most of her time with Gary (David Arquette), a mutual friend and total dope.

Let’s talk about “Hamlet 2,” a purposefully misbegotten butchering of what is arguably Shakespeare’s opus (or at least one of a half dozen). The vulgar storyline involves Hamlet obtaining a time machine he uses to go back in time to save Ophelia, Gertrude, and Laertes from their deaths — with the help of Jesus Christ, of course! Trying to help motivate the students is actress Elisabeth Shue. Shue, playing a disillusioned version of herself, quit acting, went on to become a nurse, and only misses the industry because she can no longer make-out with her cute castmates.

Hamlet 2 really is a showcase for the boundless energy of Steve Coogan, who hurls himself into the role of a laughably pathetic drama teacher. Coogan’s Dana Marschz feels like a recurring character on Tim and Eric Awesome Show, Great Job! insofar that he blurs the lines between parody and caricature. Ironically, with his wide-eyed facial expressions, and eventually long-haired wig, Coogan starts to resemble none other than “Weird Al” Yankovic at points throughout the movie. Coogan is on fire, even if the script isn’t always firing.

Written by Andrew Fleming (also director) and South Park‘s Pam Brady, Hamlet 2 is all over the place comically. I found the most effective bits to be amongst the students, whose deadpan reactions coupled with the unfolding situational comedy often gel together to create rousingly funny sequences. Early scenes of Dana trying to rile up and excite the class come to mind. Phoebe Strole as one of Dana’s prized pupils earns some laughs as her character, Epiphany, slowly transitions from goody-two-shoes to “street” in the presence of her Latino classmates for an extended period of time. But Fleming and Brady never find consistency in their footing. For example, Shue is all-but-begging for more to do. Yet when the fictionalized version of herself is introduced, not much humor stems from it. Hamlet 2 has a lot in common with Hot Rod, another comedy of the same era. Some of its moments are so uproariously funny, especially as standalone clips, you might forget how truly dour and overlong other scenes are.

14 years later, Hamlet 2 is more of a footnote for its cast than anything. The most exposure it gets in the modern day is probably when it plays on Comedy Central, a perfect home for its eccentric blend of quirky humor and postmodern madness.

NOTE: Hamlet 2 is available to rent on multiple platforms.