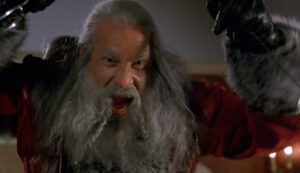 Scene: a Family Video rental store. A ten or eleven-year-old blonde boy wanders up and down the halls, grabbing various VHS and DVD cases, analyzing the front and backs of them as if he knew what the hell he was looking for. But he wasn’t in the kids section. More often than not, he was in the horror aisle, as if he were trying to fuel his next nightmare. It was here he discovered such gems as Tremors, Uncle Sam, Jack Frost (not the cuddly Michael Keaton movie), and his favorite Christmas slasher: Santa’s Slay.

He was primed when his dutiful mother rented it for him, seeing as he wasn’t old enough to do so himself. Most children this blonde boy’s age would be terrified of a movie about a killer Santa Claus. Not this one. He ate up every kitschy kill and vulgar quip as if he were Santa scarfing down a plate of milk and cookies. He’s made it his go-to holiday movie nearly every year since. He’s probably overdue for counseling.

That somebody was me. Bless my mother for letting my impressionable self watch Santa’s Slay, and then, for whatever reason, buying me the very DVD I own and abuse some years later. All due respect to the Santasploitation genre’s granddaddy Silent Night, Deadly Night, but David Steiman’s first and only directorial outing is the cream of the “killer Santa” crop as far as I’m concerned. 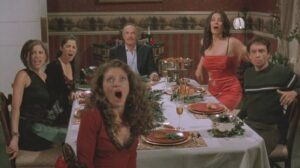 Santa’s Slay takes place in the fictional town of Hell Township, Canada, and revolves around Nicholas Yuleson (Douglas Smith), a teenager living with his crackpot inventor grandfather (TV’s Robert Culp). Grandpa has a reputation as a nut around town, and Nicholas wants to get to the bottom of why he’s always loathed Christmastime. Nicholas learns that Santa was the second immaculate conception in history after the birth of Jesus; only Santa was the son of Satan. For years, December 25th was “The Dag of Mord,” or “The Day of Slaying,” with Santa offing everyone who was naughty and nice. That was until A.D. 1005, when an angel defeated him in a curling match. Since Santa lost, he had to turn the “Dag of Mord” into the “Day of Glee,” and be the joy-spreading beacon of presents and good tidings for 1,000 years.

Now, it’s 2005, and the bet is over. Santa is free to slay again. Nicholas, his girlfriend Mary (Emilie de Ravin, Lost), and his grandpa must now try to survive Christmas Day while Santa kills half the town of Hell Township. His first victims are a bickering family, comprised of James Caan, Fran Drescher, Rebecca Gayheart, and Chris Kattan (all Jewish actors — therein lies the joke). Santa kills them with the help of a bowl of eggnog, a turkey leg, and the leg of a table. Later, it’s a nasty old woman veering recklessly all over the street on Christmas Eve, followed by the Jewish owner of a deli (Saul Rubinek), and strippers known as “Tess Tickler” and “Dixie Wrecked.”

Santa is played valiantly by Bill Goldberg, donning gray hair and fluffy red velvet topped with ash-colored fur. He rides on a bison, known as his “hell-deer,” which is mostly decoration as the sleigh has two large fiery exhausts. Goldberg nails his performance by being a joyfully evil quip-machine. This would be a lurching negative if he wasn’t so effective. He brings eye-catching charisma to the screen, the same way he did in the WWE. Over the years, I think I’ve found my favorite line delivery of his. It’s probably when the kidnapped Pastor Timmons (Dave Thomas) awakes in Santa’s sleigh remarking that he’s had a nightmare. “Visions of sugarplums?” Goldberg replies, heavy on the sarcasm and condescension, before knocking him out cold with a mallet. Simply delightful. 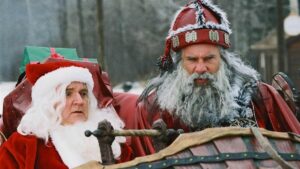 As ridiculous as some of the kills are in Santa’s Slay, Steiman (also the writer) robustly balances the comedy and horror in equal measure. This is one of the more balanced works of the eternally difficult, amalgamated genre, and Steiman performs the juggling act with poise. He renders the material effective because he believes in it. Subscribing Norse folklore as the backstory was a wise move to make this more than an inexplicable excuse for Goldberg to don his gay apparel and run wild. Sure, he does, but there’s a method to the madness that unfolds in Hell Township over the course of 75 minutes.

Colorful characters, both leading and supporting, and a fun finale that turns a high school into a playground of horrors make Santa’s Slay a worthwhile Christmas offering for those seeking more irreverent fare as opposed to the warm fuzzies of the Hallmark Machine. As a child, I remember half-anticipating a sequel. That little blonde boy could never find so much as a report of it happening. These days, that boy has grown up and is careful what he wishes for — he’s gotten one or two lumps of coal in blindly hoping for a follow-up to some of his favorite movies.

NOTE: As of this writing, Santa’s Slay is available to rent on various platforms.