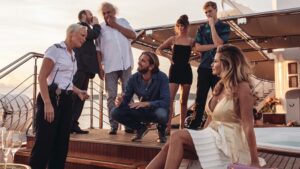 It’s difficult to believe that one of the most divisive Palme d’Or winners in a blue moon is a film that apexes during its midsection, when a group of contemptuous, insufferable elites experience seasickness on a yacht and proceed to puke and shit all over everything in sight. Here, I thought such a moment could bring 98% of the world together in these so-called unprecedented times!

Some have praised Ruben Östlund’s Triangle of Sadness for its knife-twisting into the stomachs of the grossly ungrateful wealthy class. Others have critiqued its unrelenting cynicism and self-satisfied tone. I find myself skewing more towards the former’s side, although I do think Östlund could’ve made this film a bit funnier and a bit more outrageous. Some critics have suggested that the Swedish filmmaker — whose previous film, The Square, also won the top prize at Cannes in 2017 — already exaggerated the rich characters. When you have stories of Instagram influences throwing thousands of dollars at a scam music festival that appeared out of thin air and one of the most popular rap artists sleeping on a $400,000 stingray skin-mattress, I swear nothing about these people would shock me anymore.

A three-act story, Triangle of Sadness‘ prologue involves two dating models, Carl (Harris Dickinson) and Yaya (the late Charlbi Dean, who tragically died before the film was released). A fancy dinner is ruined when Carl draws to attention the bill, which has sat untouched long enough for him to realize Yaya isn’t going to pick it up. The two then squabble about preconceived notions regarding gender roles, a fight that lasts all the way back to their hotel-room. Yaya makes substantially more money than Carl, and while he’s likely, at least quietly, jealous, he’ll come to learn the feeling of the persistent objectification she experiences.

The second chapter takes place on a yacht, on which Carl and Yaya have been invited. For an extended period of time, we meet a plethora of people aboard. There’s a fertilizer magnate who calls himself “the King of Shit” (Zlatko Burić); a disabled woman (Iris Berben), who can only say one phrase (“In Den Wolken”, which translates to “in the clouds”); and a brash Russian woman (Sunnyi Melles), who causes a whole production when she insists the yacht crew take a dip in the water. We also get a peek at that group as well, technically led by Captain Thomas Smith (Woody Harrelson), although it’s Paula (Vicki Berlin), who does most of the dirty work in helping the perpetually drunk leader get his ass in gear. 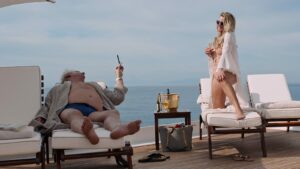 This mid-section, and the film itself, comes to a head when the Captain decides to hold the centerpiece dinner in the middle of a storm. As a result, most of the wealthy diners get seasick and vomit all over themselves and others. Undigested food that probably costs more than my rent is hurled over everyone and everything. During this time, Captain Smith — who is having a cheeseburger and fries, due to his contempt for fine dining — bonds with Burić’s Dimitry. One of the funniest sequences is the two men — an American Marxist and a Russian capitalist, go figure — having an intellectual “rap battle” so to speak: Dimitry quotes John F. Kennedy and Margaret Thatcher’s love for capitalism while the Captain throws Lenin and Marx’s musings on socialism back in his face. It’s riotously amusing, especially when scored to the sounds of projectile barfing.

The final chapter I shall not ruin. It echoes Lord of the Flies in its lawlessness, but even that falls short of comparison. It’s during the last 40 minutes that the film starts to drag, rescued in part by the late ascension of Dolly De Leon’s Abigail, the custodial manager of the yacht who finds herself in a newfound position of power. By this point, the film’s number of characters dwindles to the point where relationships can be furthered developed. However, the dialog loses its crispness during this act. It’s tough to follow a chapter as strong as “The Yacht,” but the finale’s flabbiness gives the impression of a first draft, especially in contrast to the first act’s tightness and the gleefully funny satisfaction brought on by the second.

To his credit, Östlund does stick the landing, circumventing the first chapter involving Carl and Yaya’s bickering by radically altering the characters’ positions in such a drastic manner. He’s also successful in giving Abigail depth and a fitting walk-off moment despite her late-in-the-game introduction. The various ideas swirling around Triangle of Sadness threaten to capsize it at times, and there’s a better version of this story that’s roughly 25 minutes shorter and more consistently funny. However, a Palme winner that sparks debate is better than a Palme winner I hate.

NOTE: Triangle of Sadness is now available to rent on a variety of platforms.