“You’re worthwhile. No one can ever take that away from you.” – Kai the Hatchet Wielding Hitchhiker

I recall seeing the “songified” remix of KMPH-TV’s interview with “Kai the Hatchet Wielding Hitchhiker” before I ever saw the original viral news report. The immensely talented Gregory Brothers (also known as “Schmoyoho”) took the news clip, adjusted the pitch, added a beat, and made a remix as instantly infectious as the original interview with the long-haired homeless man named Kai. In a matter of months, the nomadic man captured the hearts of the internet, reaped some of the rewards of internet fame, and eventually became wanted for a grisly murder of an elderly lawyer.

With the breakneck speed at which news cycles move, no one could blame you if you missed this one back in February 2013. It began with a television sports reporter named Jessob Reisbeck, who was tasked with going to the scene of a car accident in Fresno, CA on his first news assignment. It’s there where Reisbeck met Kai, a homeless man who was hitchhiking when the driver of the vehicle rear-ended a car and pinned a man between the two vehicles. The driver then got out of the car and grabbed another woman. Who knows what would’ve happened if Kai hadn’t grabbed his hatchet and bashed the man’s head three times before he could proceed?

Beyond his boundless charisma and surfer-bro energy, Kai went viral for his vivid account of the hostile situation. “Smash, smash, SUH-MASH!,” he yelled into the microphone, while reenacting his move of defense. Kai’s interview with Reisbeck inspired memes, song remixes, and social media buzz. Within days, he got the attention of Hollywood. He’d appear as a guest on Jimmy Kimmel Live! and soon have reality TV offers. But Kai seemed disinterested in a lot of it. His erratic and unpredictable behavior was that of a man who had become so accustomed to living off the land that it was as if he forgot how to abide by social norms.

Colette Camden’s documentary The Hatchet Wielding Hitchhiker relays the story in a way that will be mesmerizing for those who have never heard of it, and likely a worthwhile refresher for those of us who have. Kai’s story takes a dark turn when the second part of this saga is tackled. In May 2013, just three months after his viral interview, Kai, whose real name is Caleb Lawrence McGillvary, was wanted and eventually convicted for the murder of a 73-year-old lawyer in New Jersey. McGillvary is currently serving a 57-year prison sentence. 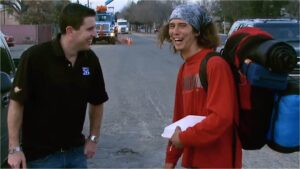 Despite his claims of rape and self-defense, McGillvary remains behind bars, with a recent appeal denied. Some of Camden’s interview subjects are Reisbeck — the primary voice of the film — the man who booked Kai for Kimmel and had to wrangle him hours before the show, county prosecutors in the murder case, and Kai’s mom, Shirley.

The Hatchet Wielding Hitchhiker is the classic case where a documentary tells a fascinating story but doesn’t assemble it into a thorough and thoughtful analysis of the subject. Kai’s rise and fall is inherently intriguing, but Camden misses various opportunities to press her subjects, particularly the members of the media, who arguably had a role in glorifying the unhinged, loopy behavior of a nomad as opposed to getting him any kind of help.

The film is criminally short at 87 minutes. I was shocked to discover when I paused the film at one point, I only had 15 minutes left. It felt like it was just getting started. The thought of the media glorifying a seriously dangerous loose canon was brought up. The investigating officers proposed several theories about the murder. And a prison interview with Kai seemed imminent. But then… credits. It doesn’t take an investigative journalist to see that Kai’s mother — who is accused by multiple people of mentally and physically abusing her son throughout his childhood — gets the easy interview treatment. More questions are raised as the incarcerated McGillvary has been saying he feels himself and his story were exploited by Netflix. If other outlets are securing interviews with the titular hitchhiker, why didn’t Camden afford him this platform to tell his story?

The Hatchet Wielding Hitchhiker is liable to leave any viewer who actively leaned forward during the documentary wanting some semblance of introspection, depth, or anything besides a hasty epilogue. The story of this unlikely viral sensation is absorbing. Colette Camden’s film leaves a lot to be desired at times.

NOTE: The Hatchet Wielding Hitchhiker is now streaming on Netflix.