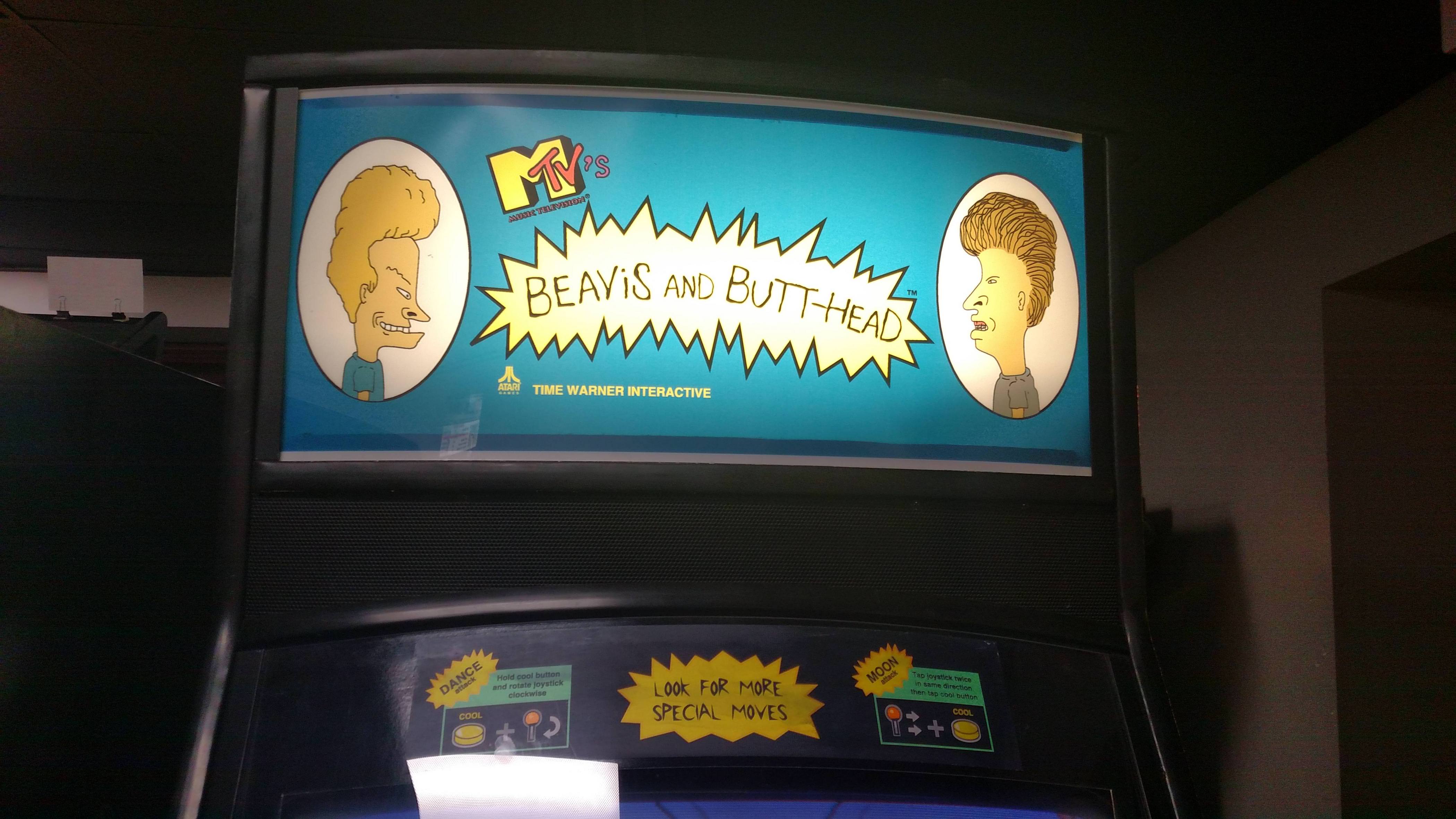 By: Steve Pulaski
My relationship with Beavis and Butt-Head started many years ago. I first watched the show on MTV2 not long after its initial run — maybe 2001 or 2002 — and marveled at the simplicity in both animation and plot. Most shows had a rising action, a conflict, and a resolution. Beavis and Butt-Head had two characters attempting to use counterfeit money to buy nachos, messing around with a table-saw in their woodshop class, and attacking a vending machine for failing to give them their “sour cream and salsa pork grinds.”
It was drastically different than Spongebob Squarepants, The Fairly Oddparents, or any show I should’ve been watching at that age. But those shows weren’t as funny as this one.
It took me a few years, but after my initial contact with Beavis and Butt-Head, I became hellbent on acquiring all the VHS and DVDs I could get my hands on. To date, I own pretty much all of them; even the Time-Life volumes on both formats. I, too, have a bootleg of the complete series (don’t be fooled by “The Mike Judge Collection” being complete like I once was) with all the original music videos still in place, including the controversial “banned” episode, “Way Down Mexico Way,” and the uncut version of “Stewart’s House.” In addition, I have the glow-in-the-dark action figures (which I really regret opening as a kid), all but one issue of the Marvel comics, various books, shirts, posters, and some really obscure stuff (including the hard-to-find aftershave).
The show was an indelible part of my childhood, but even my obsessive infatuation didn’t lead me to discovering what I found over the past weekend. 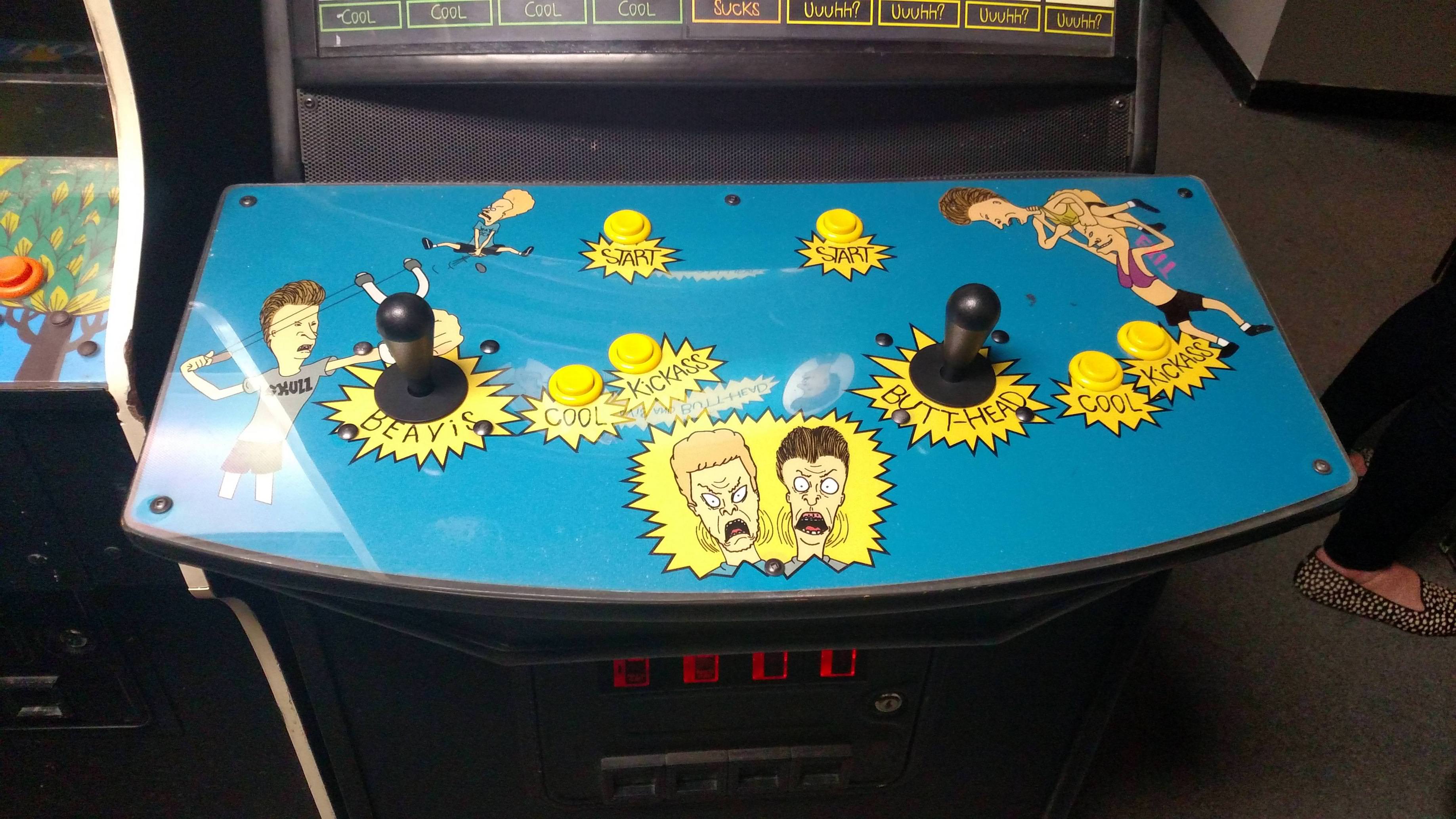 Apparently, in 1996, there were plans for a Beavis and Butt-Head arcade machine. Conceptualized as a six-stage beat-em-up-style, ala nostalgic Konami titles such as The Simpsons and Teenage Mutant Ninja Turtles, the game was created by way of a collaboration between Atari and 3DO. The game was never finished, and the 12 existing arcade cabinets, some functional, some not, were sold at an MTV auction in 1999 when it was confirmed the game was cancelled.
Reasons why Atari pulled the metaphorical plug are hazy, but it likely had to do with a perfect storm involving the company’s financial state, the declining popularity of arcades and arcade games, and the conclusion of the show (the game was in production the same year Beavis and Butt-Head Do America was released, three years after the show began). 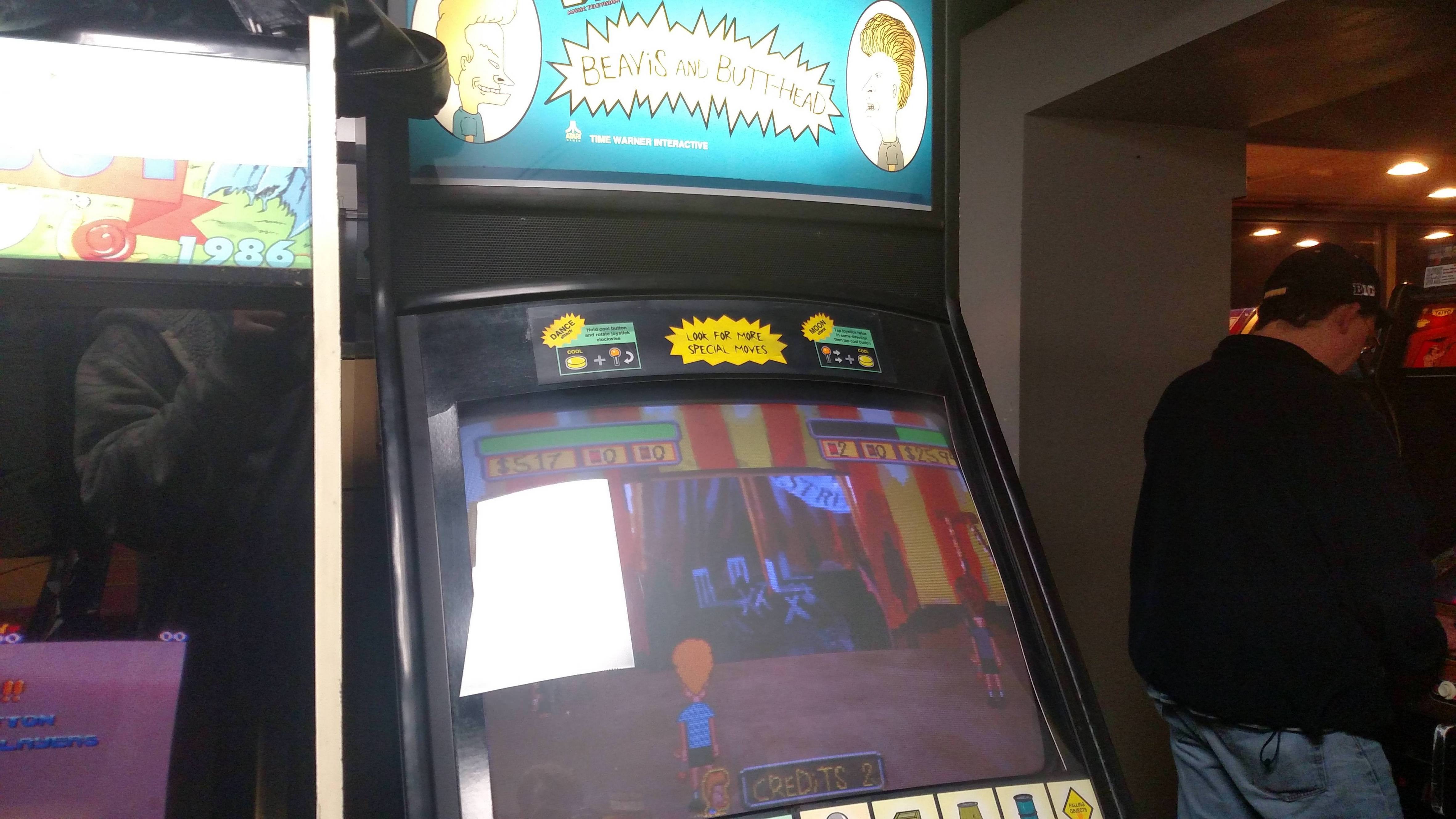 Galloping Ghost Arcade — a coin-less arcade with hundreds of restored, unique, and original gaming machines in Brookfield, Illinois — is the only place where one can publicly play this oddity. In the game, which can be played with one or two player co-op, you control Beavis and/or Butt-Head as they obliterate an ostensibly endless surplus of stock villains through a variety of different settings. Interstitial cut-scenes involve the duo sitting on their couch watching TV, with the television set itself, like in the show, displaying the title of a stage or mini-game. It’s a mindless button-masher, and the enemies admittedly take too little damage compared to your character(s), but it’s satisfying as hell. 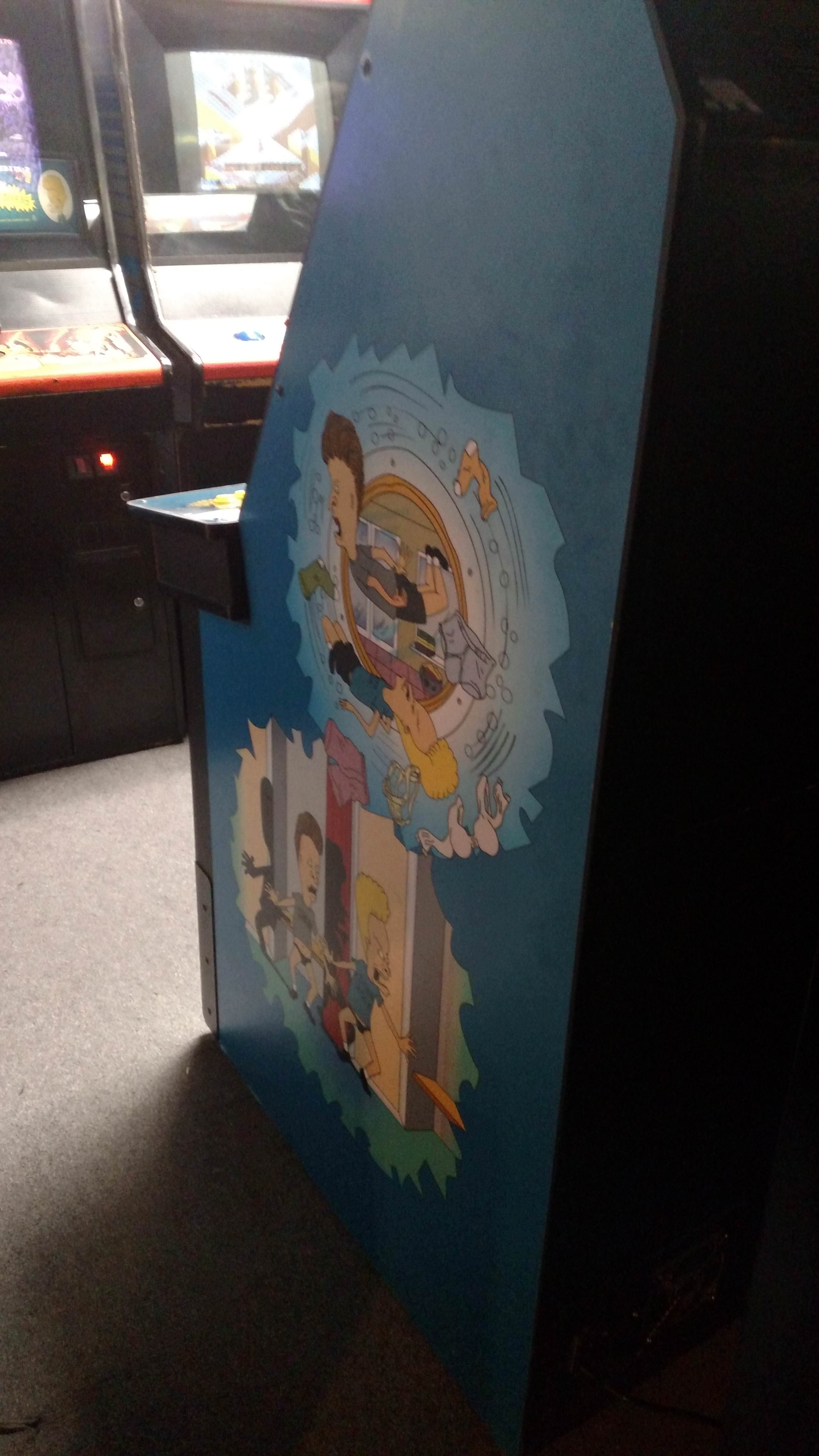 Of the six stages, only four are complete on most machines, along with some mini-games, but most will freeze upon the player finishing the fourth stage. The final stage, Las Vegas, bears a futile promise that it’s “coming soon,” perhaps alluding to the need for the player to complete the previous five stages before being unlocked. The game itself is a bit finicky, sometimes pausing for too long on a particular moment in a cut-scene or its soundtrack not directly in-sync with its characters’ mouths. But these are petty complaints, especially given what is ultimately an unbelievable privilege for someone like me, and hundreds of others, who can finally experience this curious piece of history.
The funny thing about Beavis and Butt-Head memorabilia is that while it isn’t always the most valuable, it’s still very desired and highly collectible. Don’t believe me? Go to a comic store and ask if they have any comics. They’ll likely say on the rare chance they get them, they’re gone rather quickly. Every year I go up to Lake Geneva and go to the same comic shop in the basement of a boutique and every year the salesperson tells me the exact same thing: no matter the condition, as soon as the issues are in, they are snatched up as if they are food for starved vultures.
Given the fact the show enjoyed a healthy run, along with a revival season in 2011 and a movie, and has become a pop-culture staple, it also means that there is so much memorabilia and trinkets to collect. What I listed above is just some of the stuff I happen to have. Other people have gotten lucky and nabbed items such as the recalled History of Beavis and Butt-Head DVD, which was made and nearly released without the consent of creator Mike Judge due to it housing episodes he deemed unworthy of official release. There were several video-games for systems such as GameGear and the Sega Genesis, as well as a rare CD-ROM with various Beavis and Butt-Head screensavers. There was a plastic device you could hook up to your TV that had the duo spout insults upon every channel change. A Tiger Electronics handheld game, fake IDs, which for whatever reason had the duo living in Wyoming instead of Texas, lunchboxes, and enough original shirts to provide everyone in a homeless shelter with a small wardrobe. 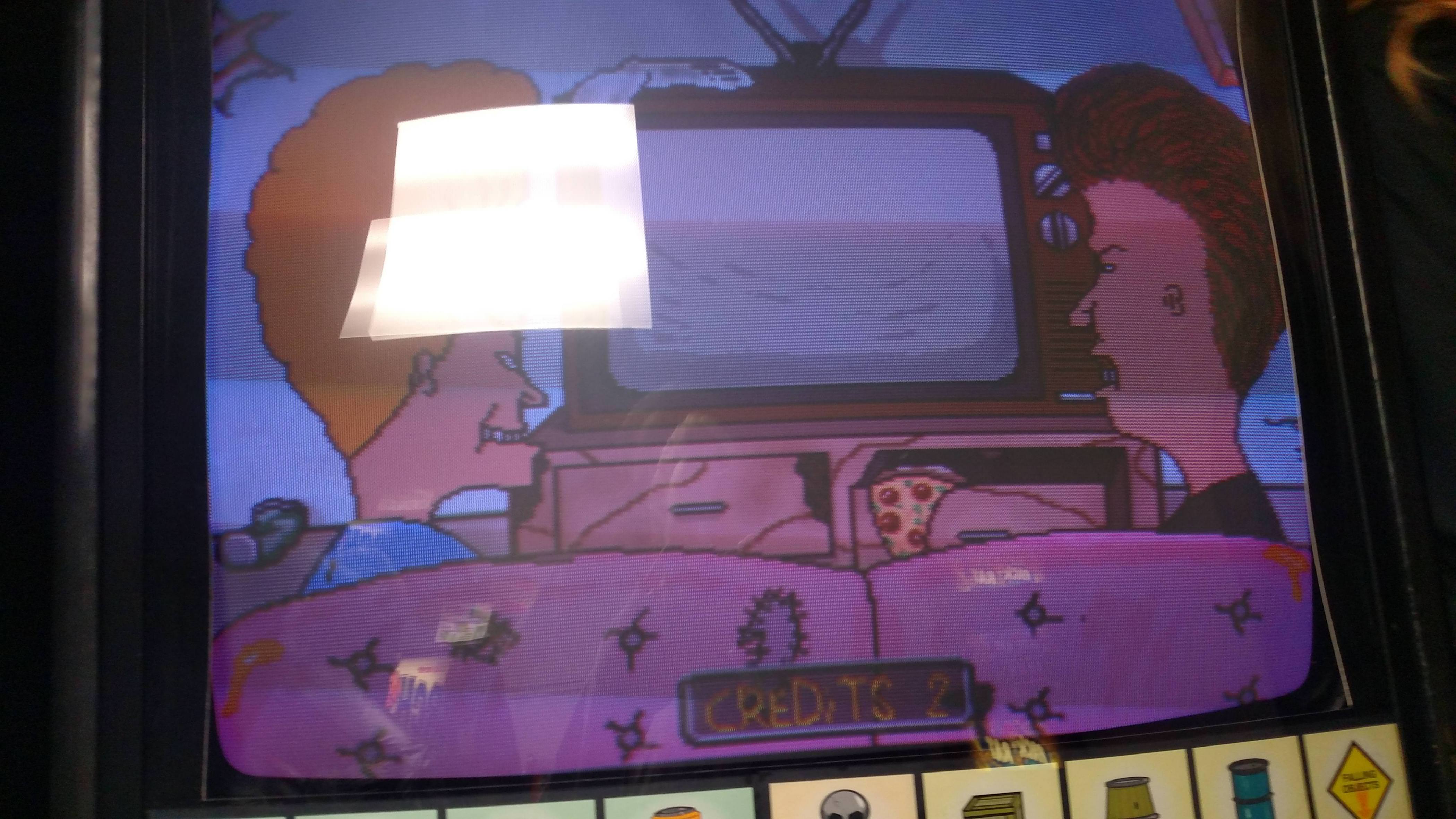 The Beavis and Butt-Head arcade machine at Galloping Ghost will hopefully enjoy a long and fruitful life, if not subjected to abuse from the rabid fans of the MTV program. Furthermore, it’s a real treat for someone like me, totally ignorant of its existence only to come face-to-face with it and know that one of the desperately few cabinets is so close in proximity to where I live, let alone the only one available for public use (others irregularly turn up at gaming/pop culture conventions). Kudos to the fine folks at the arcade — which has earned a terrific reputation among Chicagoans and those in the outlying suburbs — for going to the necessary lengths to restore it and then put it on display for others to enjoy. I’d like to think it lets all of us stay younger (and a bit dumber) for a little while longer.
Subscribe
Login
0 Comments
Inline Feedbacks
View all comments