Beavis and Butt-Head Do the Universe (2022) review 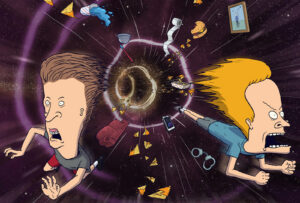 For as long as Mike Judge has teased a potential sequel to Beavis and Butt-Head Do America, that same time has been spent by die-hard fans, such as myself, getting their hopes up for its eventual arrival. The enthusiastically stupid MTV show saw a pretty good revival in 2011 before quietly disappearing from the network’s lineup. Now, it just so happens that Beavis and Butt-Head Do the Universe arrives at a time when even the most nostalgic soul can’t help but get a little sickened by the deluge of legacyquels and revived properties.

Given the strengths of recently revived works, such as Bill & Ted and Jackass, there was indeed some grounds for optimism here. But alas, Beavis and Butt-Head Do the Universe is comparatively disappointing and underwhelming on its own merits. This is less a sequel to Do America and more of a complete rehash, not all that dissimilar from the massively mediocre Jay and Silent Bob Reboot. Brief scenes of inspiration make you wish Judge and co-writer Lew Morton had these two go literally anywhere except godforsaken space.

Do the Universe initially takes place in 1998, opening with Beavis and Butt-Head (voiced by Judge) attending the Highland High School science fair — the winner of which will get a trip to NASA space camp. As a last minute attempt to win, Butt-Head uses the Power Kick 3000 to kick Beavis in the crotch, which leads them to burning down the school gym. Instead of sending them to prison, the judge (Chi McBride) orders them to eight weeks of space camp with the hopes that NASA can somehow unlock their hidden potential.

The astronauts at the Johnson Space Center (huh-huh, Johnson) are practicing docking with the Mir Space Station, and of course, the docking simulator looks like intercourse, amusing the two dumbasses. They spend hours inserting the tube into the orifice, prompting the head astronaut, Serena Ryan (Andrea Savage), to ask them if they want to “do it” in outer space. Naturally, Beavis and Butt-Head think they’ll have the opportunity to score with Serena. They are sent in space alongside Serena and her crew, destroy the shuttle, and are kicked out to die in space where they enter a black hole that sends them in the future — 2022, to be exact.

It’s in the future (or present, as far as we’re concerned) that they continue their quest to have sex with Serena, who is now running for political office. The Pentagon, on the other hand, is convinced they’re aliens, and they’re hot on their tails as well. Beavis and Butt-Head are also instructed by their “smart” alien alter-egos, who implore them to travel to a portal atop Mount Everest in order to preserve the fate of the multiverse.

My initial excitement for another Beavis and Butt-Head movie — which peaked after seeing their initial “announcement” last February — was dampened the second I discovered the two would be traveling to space. Launching this duo into the cosmos is something Principal Vicker and most of the other administrators at Highland High want, but it’s something I certainly could’ve done without. It’s an unwritten indicator that the moment a series goes to space, the creators have run out of ideas. I fear that’s happened with Judge. After 25 long years of contemplation, writing, and rewriting, the best Judge could do was space?

Given the urgency of the situation (for both the titular duo and the Pentagon officials), there’s hardly any time for Beavis and Butt-Head to acclimate to the new world, let alone comment on it. There’s a brief bit involving them fumbling with a smart-phone and discovering you can use it to purchase goods, but the constant chasing and running around skirts most of these possibilities. There’s also a deficit of interesting supporting characters; nobody comes close to matching the manic energy of Muddy, let alone the charm of the innocent old lady, from Do America. Not even Tom Anderson pops by for a cameo.

One of the film’s strongest moments happens when Beavis and Butt-Head wander into a college class, specifically a gender studies lecture. Their crass remarks about hoping to find the “slut” known as Serena leads them to getting a lesson on white privilege, which they hilariously misinterpret. A scene like this makes you wish they’d “do college,” or literally do anything except space.

It’s worth mentioning that the upgraded animation is somewhat underwhelming too. This looks more like Archer than it does even the “new” episodes of Beavis and Butt-Head, to the point where the two fartknockers look like guest stars in a completely different program. The visual upgrade winds up being something of a downgrade.

Alas, as well as being in the age where no IP is safe from a reboot, this is also the age of streaming. Beavis and Butt-Head Do the Universe isn’t a taxing sit by any means, and it might even motivate you to opt for a free trial of Paramount+. The plus-side of this is also having access to a few dozen classic episodes, which have just been added too. It’d be nice if Judge acquiesced and let the complete series be easily (and legally) accessible, but we’re not going to get that lucky — in the same sense that we’ll probably never get a Beavis and Butt-Head movie as good as the one we already got 25 years ago.

NOTE: Beavis and Butt-Head Do the Universe is now streaming exclusively on Paramount+.