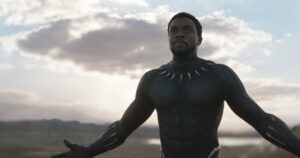 Black Panther is a rousing good time at the movies, visually intoxicating, great to look at, and benefiting from a host of talent before and behind the camera. It shows the flexibility of the Marvel formula, which largely up until this point, was beginning to show signs of wear. We’ve come to expect the same conventions in the form of plot structures, the indestructible heroes, the sub-par villains, which are often counterparts of the heroes themselves, and quips employed in effort to undercut the looming drama. While not a complete deviation from what we’ve come to expect from the leading provider in costumed entertainment, co-writer (with Joe Robert Cole) and director Ryan Coogler deftly implements African cultures, politics, and rich traditions for a commendably entertaining change-of-pace.

Coogler’s film also does just as much to show his great strengths as a director as it does Marvel’s willingness to give their secondary roster of superheros a long-awaited place in the limelight. The same director who made a sizable jump from the masterful and understated indie-drama Fruitvale Station to the Rocky spin-off Creed now takes an even greater leap to directing a nine-figure superhero film for a character that has never appeared in a film of his own. Not only tasked with the difficulty of establishing character development and showing the titular hero’s visually dense homeland, Coogler also has to engage in some world-building as well. Rather than ostensibly seeing it as an insurmountable challenge fit for another film, he goes for broke in fleshing out our hero’s home of Wakanda, an East African country populated by tight-knit, multi-generational men and women. It’s as if with every expectation loaned to Black Panther, Coogler took it and challenged himself to capitalize on it and then some, which would explain why we get the immaculately detailed film we have.

The film opens with Chadwick Boseman’s T’Challa returning to Wakanda, where he is set to succeed his father not only as King but as the bearer of the powers of the Black Panther. Unlike other heroes thrust into the sudden responsibility of inheriting newfound powers, ala Peter Parker, T’Challa is ready to accept the challenges that sit in front of him. He’s mature and cognizant of what his two new roles are, as Coogler and Cole already forgo one of the most common tropes in Marvel films. Moreover, Wakanda is built on the crash-site of a vibranium meteor, which proved to be a blessing in disguise for the small country, as it propelled them to technological progress greater than they’d ever known. One of the country’s priorities, however, has been keeping their goldmine of technology under wraps from the rest of the world, specifically neighboring African nations, for the benefit of their people.

This fuels one of the most significant themes in Black Panther, and that’s whether or not resource-rich societies have any kind of moral or ethical obligation to share their riches with other countries in efforts to make a more unified world. Like Captain America: Civil War, another film with a huge question at its center, Black Panther allows you to form your own belief on the matter, only this time, the film itself takes more of a stand rather than attempting to remain even-handed.

Most of T’Challa closest confidants are the women in his life: his younger sister Shuri (Black Mirror‘s Letitia Wright) is a sarcastic technological wizard who keeps her brother humble, his former-girlfriend Nakia (Lupita Nyong’o) is an activist who firmly believes Wakanda is putting themselves, and the global community, at a supreme disadvantage by hoarding its technology, and Okoye (The Walking Dead‘s Danai Gurira) is a committed warrior. T’Challa needs all the help he can get as the forces of arms dealer Ulysses Klaue (Andy Serkis) and Killmonger (Michael B. Jordan) begin to close in on Wakanda in efforts to steal their high-tech weaponry for the purpose of an African revolution.

Among these performances, the most intensely memorable outside of Wright’s, thanks to her ability to make good use out of Marvel’s perpetual use of humorous banter, is Jordan’s. A longtime collaborator of Coogler’s who is also one of the most talented actors of his generation, Jordan breaks Marvel’s streak of lackluster by villains by portraying one with great commitment to being a sinister personality. Furthermore, Jordan’s evident comfort in playing the bad-guy along with his prowess doing so gives us something to fear in the film as opposed to too-often abstract or blanketed motivations of usual Marvel villains. While we might not know the extent of Killmonger’s plan, we can tell by his demeanor that it’s not a situation we’d like to see play out. His aggressiveness carries a weight all his own, one greater than a monologue of intentions even written by Aaron Sorkin probably would.

Coogler and Cole don’t just set up a legion of great characters, but also give them things to do. A harrowing action sequence involves Black Panther balancing atop an unmanned vehicle that Shuri is controlling via a remote control from her lab, which makes every weave and near-miss in traffic feel that much more unpredictable. There are hand-to-hand combat scene involving the citizens of Wakanda trying to take the power from T’Challa on the edge of a waterfall cliff. These personal battles are overseen by Forest Whitaker’s Zuri, who serves as a spiritual guider to T’Challa while the King’s other friend, W’Kabi, played by Get Out‘s Daniel Kaluuya, instructs his lifelong friend to put their homeland first rather than outsource their wealth of knowledge to other nations.

Wakanda feels like a lived-in world, with characters who have known each other for years and harbor a deep sense of compassion for one another, not to mention pride for their country of origin. The dynamic landscapes of the African land’s grassy plains, mountainous terrains, and aquatic regions are captured with a variety of special effects, most of which are convincing. Between the setting being so rich and the supporting characters and their motivations existing as well-developed points of interest, I was sort of taken aback by how T’Challa himself sometimes feels like a supporting character. It’s not explicitly Boseman’s fault, but at the same time, Boseman doesn’t stand out like Wright, Jordan, Nyong’o, and their respective characters. Black Panther sets up an extensive location with a multitude of interesting personalities so effectively that, next time around, its makers should probably try and retain their focus on T’Challa before he realistically becomes even more lost in the shuffle.

With all that said, Black Panther is still very much a Marvel film in tone and style. It’s marked by a massive amount of CGI, makeup, and green-screen, which is gorgeous in some instances and glaringly artificial in others. It still ends with a grandscale battle and we get the sense there’s still so much more ahead for these characters that a larger resolution will have to wait for another day. This time around is that we get a sense the future for the studio is brighter for heroes and villains awaiting their long overdue introduction. We know the origins and intricacies of Hulk, Spider-Man, and Captain America. In more ways than one, it’s about time we see someone like Black Panther emerge.