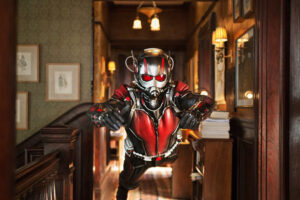 Marvel’s Ant-Man is the most enjoyable Marvel film since Guardians of the Galaxy and that, in my mind, is no surprise. Marvel’s second tier films have a great deal more to offer audiences, especially ones who are well into their superhero fatigue, than the first tier superhero films like The Avengers, Captain America, and X-Men.

To begin with, Ant-Man comes with far fewer expectations to live up to for no other reason than the titular character isn’t popular amongst the masses. I’m willing to bet most of the people who are seeing Ant-Man over its theatrical run are curious parties that know they love Marvel products and are interested in a superhero of which they’ve never heard. Of course there are the legion of people who can recite Ant-Man’s origins with the accuracy of a patriot’s ability to recite “The Star-Spangled Banner,” but the bulk of the mainstream, I feel, has only heard of Ant-Man from this specific product.

Because of this, Marvel doesn’t have to stay firmly grounded in their origin conventions and can liberate the writers, directors, and actors in their respective positions. Ant-Man, for instance, lacks the sort of candy-colored Marvel sleekness we’ve come to expect with the onslaught of these superhero films and, pleasantly so, avoids justifying numerous exploding builds and shattering skyscrapers as the climatic event of the film. Like seeing things from an ant’s eye view, Ant-Man toys with perception, captures big action on a small scale (something very revolutionary for Marvel), and packs a wallop that returns to what superhero films should be – unpredictable and fresh.

We begin in 1989, where a scientist named Hank Pym (Michael Douglas) resigns from S.H.I.E.L.D. when he realizes the organization is trying to duplicate his shrinking technology. Hank feels his invention was a dangerous accident and wants to keep the technology secret, even from his own organization. In the present day, however, Hank’s estranged daughter Hope (Evangeline Lilly) and Darren Cross (Corey Stoll) have elbowed their way into management, with Cross creating a shrinking suit he calls “Yellowjacket” for the purpose of inciting an army of microscopic vigilantes.
Meanwhile, upon being released from prison, an amiable thief named Scott Lang (Paul Rudd) moves in with his old cellmate Luis (Michael Peña) and his old crew (made up of rapper T.I. and David Dastmalchian) in order to try and obtain some money to support his child and his ex-wife (Judy Greer), who is now married to a police officer (Bobby Cannavale). Reluctantly, desperate to scrap together quick cash, Lang and his comrades decide to pull off another heist, this one on Hank following a tip that he’s away for a weekend.

When Lang manages to break through Hank’s large safe, he finds what looks to be a motorcycle suit, but upon putting it on, he realizes he now possesses the ability to shrink down to the size of an insect. He is eventually recruited by Hank to stop Cross and his Yellowjacket alter-ego.

Ant-Man is a wickedly interesting superhero for many reasons, but one of which is the fact that his superpowers aren’t the result of a cockamamie genetic mutation. Lang, whenever he doesn’t have possession of the suit, is a regular guy, indifferent from you and I, and this relatability amongst heroes grounds the film on a considerably human level. Even after some of the more rigorous action scenes (which aren’t nearly as long-winded or tiresome as the ones in Avengers: Age of Ultron), Lang still shows his human side whilst trying to be there for his daughter and do right in a world where it seems the only way to get ahead is to do wrong.

Furthermore, Marvel subverts its own action formula by decidedly taking its action sequences down several notches in size and scope. Consider the scene where Lang first puts on the Ant-Man suit and subsequently shrinks; he is sucked down the drain of a shower onto lower-level floors, one of which is a nightclub. In this one, blink-and-you-miss-it scene, we see much of the tension and possibilities of this character exhausted, yet we’re not even close to seeing what else this character can do even after the credits roll. The beauty of a character like Ant-Man is how visceral he is; when I see Captain America take on villains in every film, or even Iron Man attack his enemies with one quip after another, I still feel like I’ve seen it all.

Much has been made about Ant-Man‘s checkered production history, dating back to the 1980’s, and the directorial shakeup that saw Edgar Wright (Shaun of the Dead, Hot Fuzz) eventually step down but still obtain a screenplay credit alongside the likes of Rudd, Joe Cornish, and Adam McKay. Peyton Reed’s directorial vision is still as vibrant as ever, yet simultaneously not relying on a visual assault, but rather, a colorful palette of creativity, and Wright’s influence is still very much felt in Ant-Man‘s script, which is littered with zingers. I was worried that much of Avengers: Age of Ultron‘s lackluster attempts at comedy that Ant-Man would wade in the water in terms of comedy. Like countless ants every year, my worries were squashed.

Ant-Man is one of the strongest films of Marvel’s recent superhero batch, less predictable, more centered on the kind of free-wheeling, unpredictable fun from which superhero films should stem, and lacking the hardened expectations of the masses in favor of a looser approach. Like Guardians of the Galaxy, there’s a commendable level of respect for the titular hero, yet a certain irony that just questions, “how did we get this far?” in a way that doesn’t end up insulting the respective hero(es).