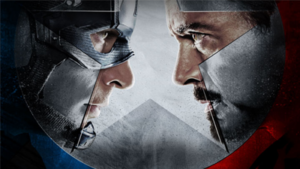 The first Captain America film, a startling five years ago already, was an interesting superhero movie almost solely on the grounds of its visual scheme, which was decidedly retrospective and boasted an amalgamation of styles. It was a distinctly modern superhero film in terms of story and visual effects, yet set its sights on detailing 1930s/1940s America, with everything from costumes to characters looking old-fashioned. It was a pleasant visual feast, but almost entirely underwhelming and forgettable in its other elements.

Its sequel, Captain America: The Winter Soldier, was more potent because of its very layered plot and felt like a bigger, brasher step up from its predecessor thanks to the new team of directors, Anthony and Joe Russo, while still keeping the same writers, Christopher Markus and Stephen McFeely. Even with all that, however, I began to identify my own personal “superhero fatigue” with The Winter Soldier. The film’s narrative got bogged down in a plethora of specifics to the point where I felt it was trying to be The Dark Knight with a more upbeat, candy-colored Marvel visual scheme with too many characters and not enough investment.

With Captain America: Civil War, everything about this series feels more realized; I’d go as far to call it the most mature Marvel film to date. Even some of my favorite Marvel films of recent time – The Avengers, Iron Man and its sequel – felt like whenever there was a time when the respective writers were unsure of how to move forward, they would initiate an enormous battle sequence to kill a good fifteen minutes of time.

Civil War beautifully resists that urge not only by being punctual with its brutality and altercations, especially for a film tilted “Civil War” of all things, but it gives us the narrative heft without being too complex or preachy, and the emotionally investment without resorting to comic quips in efforts to lighten up everything (something that nearly killed Avengers: Age of Ultron). While the Winter Soldier remains an integral part of the story, the central battle lies within the Avengers, specifically Steve “Captain America” Rogers (Chris Evans) and Tony “Iron Man” Stark (Robert Downey Jr.), so deep that the unity between the six heroes we’ve come to know could be crippled.

The dividing issue between the two is how they want to proceed in terms of dealing with the United Nations’ proposed legislation, called the “Sokovia Accords,” that would strictly monitor and essentially control the actions of superhumans, specifically the Avengers. The legislation comes shortly after an accident leaves several innocent lives killed during a fight between Captain America and Rumlow, with the blame of the incident resting on the shoulders of the Avengers.

Stark believes that going against the guidelines of the United Nations would only further the lowly status and perception the Avengers have in society at this time. Rogers, on the other hand, believes that the free-will of the Avengers would be entirely corrupted and the sanctity of the unit would crumble as soon as it would be monitored or dictated by an outside entity. The two are at a crossroads and begin to work against one another, with Stark aligning with War Machine (Don Cheadle), Black Panter (Chadwick Boseman), Black Widow (Scarlett Johansson), and Spider-Man (Tom Holland).

Rogers winds up aligning with his long-time friend Falcon (Anthony Mackie), Hawkeye (Jeremy Renner), Scarlet Witch (Elizabeth Olsen), Ant-Man (Paul Rudd), and even the Winter Soldier (Sebastian Stan), upon brainwashing him to do so.

Civil War realizes that its title does not need to be the plot of the film, which is one of the best things about the film. It ostensibly steers itself onto the path of making the same mistakes as Spider-Man 3 or even The Winter Soldier by creating too many plots for too many characters, but the film’s freeing runtime and careful screenwriting allow it to humanize and develop these characters.

One of the most promising souls of this entire film is Holland’s Spider-Man, who gives off that youthful, naïve energy that echoes Tobey Maguire’s Spider-Man over ten years ago. Holland’s first-time verbal and comedic banter feels like the contrast to Stark’s more mean-spirited, smug vocal tone that has been the constant of the MCU since his introduction. The two together, while not sharing a plethora of screentime, at least allow for these traits to be foreshadowed for what’s to come in the following films.

But Civil War is something the Captain America franchise hasn’t always been and that’s incredibly entertaining for such a long runtime. The Russo brothers, along with Markus and McFeely, take the Marvel quips and clichés that we’ve expected over the course of so many films and spin them in such a way that turns this installment into one that’s ecstatic and breakneck in the entertainment it provides.

Civil War, ultimately, is the playoff game before the Super Bowl, and initial skepticism with Josh Whedon’s departure from Avengers: Infinity War is at least muted by the sheer power that this film possesses in not only taking the MCU to its home stretch but giving us a strong film to kick off the summer movie season with.