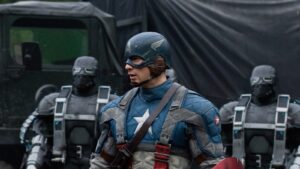 There’s a pleasant visual-scheme and aesthetic that exists in Captain America: The First Avenger, thanks in part to its recreation of the 1940’s time period. This makes it the most visually unique Marvel film I have yet to see being that all the aforementioned superhero films had the similar, ultra-crisp, spit-shined aesthetic that wouldn’t allow a flaw or imperfection to be noticed by the naked eye. With this 1940’s costume and set design, we can at least see how Marvel plays with time period, offering up common settings and historical occurrences to go along with this specific time period in a way that is a breath of fresh air from the monotony that can entail with looking at the same kind of superhero film.

Having said that, it’s disappointing to note how flat Captain America: The First Avenger can be as a whole, despite focusing on a character who hasn’t seen much cinematic love outside the ho-hum films of the past few decades. As the film begins, we meet Steve Rogers (Chris Evans), a scrawny individual with numerous health conditions, who still optimistically tries to enroll in World War II because he wants to know he’s making a vital difference when serving his country. Rogers gets turned down time and time again, finally given the honor by Dr. Abraham Erskine (Stanley Tucci), who believes that he is the perfect one to play along with his “super-soldier” experiment that he is concocting. The operation leaves him with side effects that will stick with him permanently, including super-strength, impeccable athleticism, among other physical benefits.

Just in time too, with Johann Schmidt (Hugo Weaving), Adolf Hitler’s head of weaponry who possesses his own plan for world domination involving an object called the “Tesseract.” Schmidt’s alter-ego is Red Skull, the famous Marvel villain who runs the terrorist organization HYDRA, which Rogers, now draped in red, white, and blue clothing going by the name of the patriotic mascot “Captain America,” must find a way to destroy.

This is the kind of superhero film, similar to what would later become Iron Man 3, where there isn’t really a core thing that’s wrong with the picture, but numerous little things that work against the entire project that will come to derail it in the long-run. To begin with, Red Skull’s backstory, character, and overall personality is never really laid out for audiences, becoming just another villain we’re supposed to root against because of Marvel namesake. Never do we spend enough time with Schmidt to hear more about his plans for “world domination,” and we’re just expected to kind of go with it, passively accepting the cheap excuse for a villain motive.

Secondly, the technology, some of which looks the time period, most of it doesn’t. The weaponry during the war, the artillery, and a lot of the superhero technology (which may be true to the comic book, I’m unsure) doesn’t look at all fit for the time period. It would appear that the crew of costume and set designers spent so much time trying to recreate the exterior of what a 1940’s cityscape would look like that they forgot that everything the characters used to fight each other look like just another device from modern-day superhero films.

Then there’s just the obligatory romance between Rogers and a military commanding officer named Peggy Carter (Hayley Atwell) that goes shockingly undeveloped and rather cold throughout the film. It doesn’t help that the writing team of Christopher Markus and Stephen McFeely (the same men who wrote all three films in The Chronicles of Narnia franchise thus far) keep this relationship very low-key until near the end when they decide to bring it into the main focus.

Those issues aside, Markus and McFeely do a great job at illustrating the shortcomings yet big aspirations that come in a package-deal with Rogers. This element brings to question “does every superhero need to be musclebound and physically dignified?” I was looking forward to a scrawnier Captain America defending the universe. Then Dr. Erksine’s experiment blew up his build considerable (and by “blew up” I mean the visual-modifications to Chris Evans in post-production were generously ceased).

Captain America was a hero I always tied together with Superman in the regard that I never felt any vulnerability or nervousness when he was leaping around from place-to-place. Captain America, especially in this case, seems fazed by absolutely nothing in this film, never being thrown in the face of danger, never seeming to be at any risk of injury or peril, and so forth. This is likely why I enjoy Spider-Man so much as a hero because I could sense physical and mental vulnerability in the character with the same going for Batman in Christopher Nolan’s trilogy, as towards the end, we saw a bit of Bruce Wayne’s mental vulnerability. I can’t make those same connections with the invincible, heartthrob that is Captain America.

While I can appreciate and admire that director Joe Johnston efficiently contains most of the action, Chris Evans fits the bill perfectly for Captain America (except, you know, the whole computer-generated weakness business), Tommy Lee Jones’ great performance as a military colonel, and the 1940’s aesthetic, there’s little to offer in terms of something that isn’t an interchangeable superhero flick of the modern age. The saving grace is that at least Captain America: The First Avenger doesn’t come gift-wrapped in bleeding heart patriotism like it easily could’ve been. Markus and McFeely thankfully seem to have bigger plans than that, even if they don’t all succeed overwhelmingly.