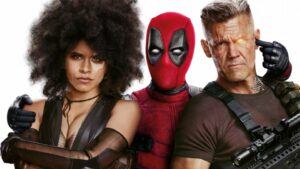 Deadpool 2 has both the benefit and burden of familiarity, especially arriving just two years after its beloved predecessor. In a market saturated with costumed heroes who sometimes look as if they’re straining to keep their quips and actions within PG-13 boundaries, there’s something really gratifying about seeing an unkempt anti-hero with a foul mouth run wild with his own brand of violence and meta-commentary — again.

Atomic Blonde director David Leitch’s successfully navigates this sequel through the minefield of problems of making a follow-up to a work so distinctive. Like 22 Jump Street, it remains cognizant of what fans adored about the original and foregrounds those attributes while upping the ante in other departments in a film that serves as a comfortable companion-piece. Also like that aforementioned comedy, it will depend on what side of the bed I awake each morning if you ask me which film I prefer. Both Deadpool and its sequel are sister-films in every sense of the term.

Ryan Reynolds reprises his role as the titular character. Known as Wade Wilson outside of the black and red jumpsuit, he’s nestled into a mostly normal existence with his girlfriend Vanessa (Morena Baccarin), with plans to have a child in the coming months. When tragedy inevitably strikes, still somewhat humorously conveyed by a caustic, Air Supply-scored montage of depression that opens the film, Deadpool goes to live at Professor Xavier’s School for Gifted Youngsters, the closest he’s come to being part of the X-Men.

Deadpool gets a shot, however, as a trainee for the iconic supergroup alongside Colossus (voiced by Stefan Kapicic) and the eminently likable Negasonic Teenage Warhead (Brianna Hildebrand) during a police-showdown involving a young mutant known as “Firefist” (Julian Dennison), who is trying to escape a rehabilitation center for mutants. After learning that the head of the facility (Eddie Marsan) is responsible for some truly horrific crimes, Deadpool attempts to rescue Firefist for his own safety, yet the both wind up in a high-security prison known as “the icebox.” Not long after, the undersized time-traveler Cable (Josh Brolin) arrives with plans to kill Firefist, forcing Deadpool not only to keep a watchful eye on the troubled youth but also assemble his own group of inclusive, gender-neutral superheros known as “X-Force.” One of whom is Domino (Atlanta‘s Zazie Beetz), whose power is simply having great luck in the knick of time, as well as Bedlam, played by Terry Crews, and some random guy named Peter (Rob Delaney) because Deadpool and Weasel’s (T. J. Miller) superhero casting calls were slim pickings in the talent department.

As you can probably infer, there’s little in Deadpool 2 meant to be taken seriously. The film, much like Reynolds and the character he’s less played in the last couple years and more defined, wears its inability to remain composed for any extended length of time. While your mileage may vary in that department, after the vast world-building and social commentary of Black Panther and the dramatic final act of Avengers: Infinity War, I welcomed Deadpool 2‘s crass sensibilities debatably more-so this time around than back in 2016. One of the strengths of the screenplay, again written by Rhett Reese and Paul Wernick, only this time with added help from Reynolds, is its supporting characters, who never allow Deadpool to hijack the film like the character did some Spider-Man: Homecoming posters or a handful of Fox Blu-Ray covers at your local superstore.

The delicate mixture of comic relief and conviction from Colossus and Teenage Warhead is back, pleasantly so, while newcomer Domino and her vague definition of “superpowers” never undermine how much fun Zazie Beetz looks to be having in costume. Furthermore, Brolin does remarkably well, not only playing two extremely large characters in the Marvel Universe (yes, there is a Thanos joke in the film), but going from being an interchangeable straight-man to a noticeable presence. In a role that could’ve been nothing but a punching-bag for the larger characters ala Brett Kelly’s Thurman Merman in Bad Santa, Julian Dennison still makes his Firefist character a strong voice that works well alongside Reynolds in a way that assures he doesn’t get kicked to the side or lost in a number of asides, for that matter.

The “burden” of Deadpool 2 comes from the titular character, who is undeniably one-dimensional: his motives are almost always clear, he’s scarcely tasked to do anything outside of his comfort zone, and his sentiments are largely made up of a shrug and a choice four-letter word. It’s this familiarity that makes parts of Deadpool 2 particularly exhausting coupled with Reese and Wernick’s greater fascination with manic CGI action sequences, which are more ubiquitous this time around. The lengthy bouts of ultra-violent battles tread the line of vulgar slapstick with the way they pummel the audience and make up a sizable portion of the second-act.

Deadpool 2 is indeed responsible for some things I didn’t quite expect. In addition to the competent string of supporting characters that create Deadpool’s second favorite “F-word,” the film’s soundtrack takes on a personality of its own. With cutely placed cuts of Rupert Holmes, a-Ha, Cher, and Pat Benatar, the personality of the score is akin to the Guardians of the Galaxy franchise minus the unmistakable prominence in the narrative. Also added to great effect: Karan Soni’s affable role of Dopinder, a cab-driver hungry for his turn to play hero, and a brief but hilarious sequence involving Deadpool’s rag-tag X-Force. Head’s up — you don’t have to pay attention to the latter too closely to find it funny, much like the rest of the film. It’s efficient, surface-level entertainment for those who have had enough subtext to chew on thanks to the heft of the two other Marvel films this year.