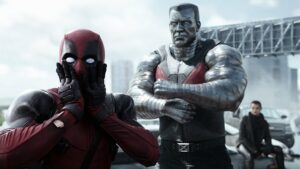 Even if you downright despise Tim Miller’s Deadpool, Marvel’s first R-rated, vulgar and violent superhero film, you almost have to admire the lengths to which this film was marketed. Deadpool‘s colorful and eclectic marketing campaigns, which featured interactive theater standees, a multitude of different posters and banners with tongue-in-cheek lines, bold and self-referential Television spots, professional interviews with the cast in character, and a release over Valentine’s Day weekend to further its lack of boundaries, is among one of the best of the new decade in terms of getting people excited about what was predicted by many to be a tough film to market.

The fact of the matter is something like Deadpool is what the Marvel brand needs. Even amongst superhero fans, the recent influx and market-saturation of heroes getting their first origins story on film or sequels furthering another hero’s saga, the genre is breeding familiarity and contempt at the same time (I’ve spoken about this on a personal level many times). Superhero films often bear a PG-13 rating for strong violence, sporadic language, and sexual innuendos. Meanwhile, here’s a film of the genre that earns its R-rating like most Judd Apatow comedies do; comparatively, with all the four-letter words tossed around like sentence articles, it would the events on Saturday night at a city bar look worthy of a PG-13 rating. Finally, its bloody, often wince-inducing violence reminds us that, even in the modern day, superhero films aren’t nearly as rough and ugly as they could be. The film is less Marvel’s red-headed step-child amongst superheroes than it is an unearthly, oversized meteor that has just crash-landed in a multiplex near you, demanding your money and attention for nearly two hours in return for some of the most cacophonous violence, language, and debauchery you’re likely to see from a mainstream film all year.

The film revolves around Wade Wilson (Ryan Reynolds), a mercenary who now spends his days in New York City protecting teenage girls from stalkers and ex-boyfriends by working for a company that specializes in taunting and assaulting them. Wade winds up becoming romantically entangled with a prostitute named Vanessa Carlysle (Morena Baccarin) with plans to marry her until he is diagnosed with terminal cancer. As a response, he leaves Vanessa and undergoes an underground procedure to kill his cancer, only to be injected with a serum that leaves him horribly disfigured. Upon escaping from Francis Freeman’s (Ed Skrein), the man who has surgically altered him and his body, Wade learns that he now has the ability to rapidly heal, as well as maneuver and contort his body in inhuman ways.

In effort to mask his horrid appearance, Wade “squeezes his ass” into red and black spandex, attaches two machetes to his back, protects himself with an endless supply of guns and ammo, and becomes the violent and unpredictable Deadpool. He plans on taking out Francis for ruining his physical appearance, rescue his girlfriend from her captivity by Francis, and continue to assure both Colossus (Stefan Kapičić) and Negasonic Teenage Warhead’s (Brianna Hildebrand), two individuals that are part of X-Men, that he doesn’t need to join X-Men in order to become a more competent, proven superhero.

Deadpool‘s approach to humor is much like that of Dirty Grandpa‘s, a film I saw about two weeks ago that has already faded from the minds of most consumers; it’s a film that throws numerous lines, jokes, and concepts at a wall in order to see what sticks. Throughout the course of this film, Reynolds’ Deadpool probably has a good one-hundred and fifty lines rooted in jokes, and while less than half produce a laugh, they help articulate that this is a character none of us have really seen before. Deadpool’s unapologetic lack of political incorrectness is what makes him such a monumental, albeit exhausting, presence. His unwillingness to cater to the tendencies of the mainstream or the ordinary are precisely why we watch superhero films in the first place; it’s only recently that we, along with the core themes of the films, have lost sight of this in favor of quantity over quality.

The consistent pestering of Deadpool by Colossus and Negasonic Teenage Warhead works to illustrate a nice metaphor of how Deadpool’s inception on-screen came to be. Some studio executives probably wanted to neuter or clean up his attitude and story to make him a more marketable character rather than an outspoken anti-hero; perhaps make him a dark, but not too dark, X-Men character that at least had some semblance of discipline. Through Reynolds’, Miller’s, and screenwriters Paul Wernick and Rhett Reese’s respect and loyalty to the character and his brand, they’ve created a film that will satisfy, or at least entertain, almost all who choose to see it. While its humor is a bit infrequent, its ability to entertain is quite prolific, merging meaningful drama with raunchy comedy and gratuitous bloodshed to create the Quentin Tarantino of superhero films from the ground up.

Marvel needed a superhero that the wearying audience could look unto and smile and through the fourth-wall breaking, crude and careless, unapologetically ruthless Deadpool, they’ve crafted a hero that is worthy of your attention.