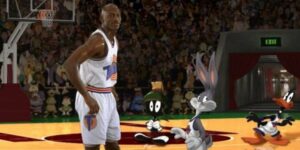 If you live in Illinois, you know you could have an easier time bashing the Holy Bible than Space Jam. Sure, it’s one big messy hodgepodge of Warner Bros. characters. Moreover, however, for the Chicago Bulls loyalists and Chicago sports die-hards, it’s one of the few showcases of Michael Jordan feeling like a vulnerable human being. He’s more relatable here than he was during his second tenure/subsequent ownership career.

If we remove the nostalgia factor from Space Jam — which is a very difficult thing to do — then the film serves as Jordan’s versatility. After retiring from the NBA at a relatively young age to pursue a career in baseball, Jordan only became more of a fascinating person. You also see him humbled in moments when he’s squished into a basketball or sized by the large, villainous “Monstars.” Space Jam exists as a response to Jordan’s departure from the NBA to the MLB, as the Looney Tune gang of Bugs Bunny, Daffy Duck, Tweety Bird, Sylvester the Cat, Porky Pig, and Lola Bunny all call Jordan out of retirement when they challenge a group of intergalactic invaders from “Moron Mountain” to a basketball game in exchange for the planet.

The Looney Tunes think this will be an easy win, until the aliens from Moron Mountain, who are relatively puny in size and strength, find a way to steal the talents of star basketball players like Charles Barkley and Patrick Ewing and become the “Monstars” of the court. Meanwhile, Jordan agrees to play for the Looney Tunes team, but it takes all of the five minutes of practice to show that the team is disproportionately talented towards Jordan. As a result, the team indulges in some aggressive training tactics in effort to save the planet.

As an amalgamation of live-action and animation, especially in an age where Pixar was coming on the scene and traditional animation was soon to be phased out, Space Jam is bright and vivid. The real-life characters of Michael Jordan, Wayne Knight, who has an amusing role, Larry Bird, and even Bill Murray’s interactions with the animated characters are convincing. The result is a beautifully colored and nicely executed mix of whimsy.

Because both worlds of reality and animation are explored here, Space Jam has the luxury of being a film that can go beyond traditional boundaries of a sports film, and the Looney Tunes are no better characters to incite such zaniness. The animated bunch are quick-witted and ecstatic, and Jordan is clearly doing this for fun and excitement rather than a phoned-in project or another endorsement. Had Space Jam been more of a lackluster cash-in, sports fans and Jordan fans would’ve seen it from a mile away and dismissed the film immediately. However, because everyone involved recognizes what a zany project this is, they don’t try to fight the lunacy. In turn, everyone checks their egos at the door and strides forward into a lively sports film that is so fun you almost, almost ignore the clichéd underdog narrative.