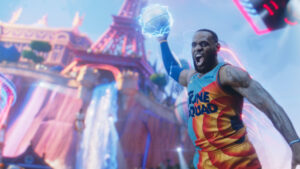 If this past Lakers season taught us anything, it’s that LeBron James can no longer shoulder a middling team to the NBA Finals. The same goes for feature films, evidently.

LeBron’s extended cameo in Trainwreck merited consistent laughs along with optimism that he could transition his once-in-a-generation athletic ability and million dollar smile into acting with charisma being his main weapon. Among many problems that run amok in the long-awaited Space Jam: A New Legacy, one of the most jarring is how big of a prick LeBron is for about 75% of the runtime. The six credited writers drain the lovability out of the arguable GOAT by making his screen-persona the archetypal hard-ass father who hounds his kid for loving something different than the passion he turned into an all-time great career.

And that’s the tip of the iceberg for a movie that would’ve been better served to be called “Ready Player Space Jam.”

The plot: LeBron James is a father to three children, two of whom boys. One has all the makings to be the “Prince” to succeed King James. The other is Dom (Cedric Joe), a tech prodigy who, at 12-years-old, has put his hoop dreams on pause to create a hyper-stylized basketball video game. LeBron is a brutal barker to Dom. The opening scene shows LeBron throwing away a Game Boy he got as a gift after blowing a gimme jumper that would’ve won his middle school basketball team the game. He’s eliminated all distractions since then in effort to become the world’s best basketball player. He can’t seem to see his son is doing the same, only with video games.

Enter Al G. Rhythm (Don Cheadle), Warner Bros.’ advanced computer algorithm that tries to get famous by forcing a digitized LeBron to appear in the studio’s films (an inexplicable plot-point to get to the “good stuff”). When LeBron turns down the deal, Al G. kidnaps both him and Dom, and entraps them in Warner’s “Serververse,” a complex computer network housing every single WB property. Al G. also buddies up to Dom to hijack his creation, forcing LeBron to rally the Tune Squad to square off in a game of “Dom Ball” against monstrous clones of basketball superstars (Anthony Davis, Damian Lillard, and WNBA’s Diana Taurasi, who Kobe Bryant once nicknamed “White Mamba”).

Steven Spielberg should be on the receiving end of royalties as Space Jam: A New Legacy feels more like a sequel to Ready Player One than the film that still stands as one of the most entertaining items to emerge from the Michael Jordan-era. Surrounding the court for the climactic basketball showdown are a gaggle of Warner Bros. intellectual properties: Pennywise, Yogi Bear, the Flintstones, and even the Droogs (!) from A Clockwork Orange are present, moving back and forth like holographic nothings in a crowded setpiece.

What could’ve provided ample commentary for the incessant desire of studios to make everything old new again, the sextet of writers simply include these characters in hopes we, the audience, do that ecstatic “point” gesture Leonardo DiCaprio did in the now-memed moment from Once Upon a Time in Hollywood.

How have I gotten this far without mentioning the Looney Tunes? Because even Space Jam: A New Legacy forgets this is the first time they’ve graced the big screen in nearly 20 years. Bugs Bunny, Lola, Daffy Duck, and Tweety are mostly kept on the bench, reduced to a few catchphrases. Especially disheartening is when Al G. forces the SpongeBob-effect on the Tunes, transforming them into more-recognizable yet still unnerving 3D versions of themselves where they sprout realistic fur.

Outside of that aspect, the film is commendably attractive visually. It’s a dazzling display of rainbow-colored pixels and graphics that make for a colorful symphony. It’s an eye-catching mess, but a mess no less. I had moderately high expectations for Space Jam, elevated if for nothing else than the hopes it would be good enough to spark a debate on top of a debate regarding Jordan vs. LeBron. There’s no debate here. Space Jam: A New Legacy is a dreadful airball and one of the worst films of the year thus far.

NOTE: Space Jam: A New Legacy is now playing in theaters and streaming on HBO Max until August 15th.