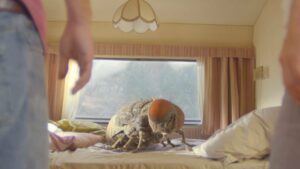 It took nine films, but Quentin “No Reason” Dupieux — who has gifted us stories about sentient killer tires, crooked cops, and deerskin jackets — has finally made his first great picture. Mandibles is as splendid a screwball comedy as they come, brimful of effective situation humor and a lingering relaxed pace that assures it never gets too bonkers for its own good.

Mandibles is many things, but first and foremost a buddy movie where the pals are Manu (Grégoire Ludig) and Jean-Gab (David Marsais). In the opening minutes of the already short 72-minute flick, the two discover a housefly the size of an average wastebasket in the trunk of the car they just stole. Instead of, you know, the shock of finding a humungous fly, they fear this hinders their plan to make a simple deal and rake in money.

Manu and Jean-Gab then decide to ditch the already-in-progress transport for the time being in favor of another bright idea: train the fly to steal goods and money to enrich themselves. Their training sessions with the fly (whom Jean-Gab names Dominique) are often interrupted by a string of mitigating circumstances. They shack up in a stranger’s RV only to accidentally set it on fire, rendering them temporarily houseless. The two dolts are subsequently saved, however, by the likes of Cécile (India Hair), who is convinced Manu is a guy she knew (and slept with) in high school. Manu plays along, as unconvincingly as he can despite Cécile being none the wiser.

“Remember when we fooled around in high school? You came in two seconds,” Cécile tells Manu. “Oh yeah, you too,” he says with the stupidest of smiles.

More suspicious of the nefarious duo is Agnès (Adèle Exarchopoulos, Blue is the Warmest Color), a friend of Cécile’s, who — due to a skiing accident — speaks as if she’s shouting in anger, even in casual conversation. We’re not quite sure as audience members if we should be laughing at Agnès’ disability or playing along with it, but Exarchopoulous makes the character so brazenly (mind you correctly) wary of Manu and Jean-Gab that it’s hard not to find her uproariously funny. She grows comfortable with the character as time goes on.

Let’s talk about Manu and Jean-Gab, played by Ludig and Marsais with a laidback yet clear comfort within their roles. The two are the live-action, physically uncaricatured Beavis and Butthead; maybe even Harry and Lloyd. Whether they’re carrying out their duties with deadpan conviction or cheeky smiles across their faces, they’re eminently watchable protagonists. The most amusing trait of the two is their constant “secret” handshake: making the “rock on” hand-gesture simulating bull-horns, interlocking their knuckles, and saying “Toro!” in unison. That’s how they celebrate or cherish a moment, even uneasy ones.

Oh, right, back to the gigantic fly at the center of the picture! It’s an eye-catching, if rather odious-looking creature, complete with bulging red eyes, wiry hair, and wings the size of cutting-boards. Following initial repulsion, you might find its innocuous appearance growing on you with time. A credit to Dupieux for presumably using very little (if any) CGI. The actors are working with a tangible object as opposed to a digital creation, thus the presence of the mutant housefly is felt. Adding to the farcical nature of Dupieux’s Mandibles is the desire to play the circumstances of the fly straight. Manu and Jean-Gab don’t question its appearance, so why should we? Besides, Dominique becomes a welcomed third-leg of the central tripod as the duo train her to come when called and tilt her head.

Too often have Dupieux’s unabashedly absurd films been on the cutting edge of channeling something remarkable. Too frequently do they aim high but fall just short of some kind of overarching theme or satire. Mandibles functions swimmingly as a screwball buddy comedy. By orchestrating an ensemble of likable types and amplifying the friendly nature of both the main characters, Dupieux creates a delightfully likable film — his best to date.

NOTE: Mandibles is in select theaters and available to rent on multiple platforms.