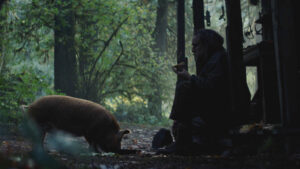 It’s not what Michael Sarnoski’s Pig is about but how it’s about it, in so many words. It’s a sullen picture liable to leave you feeling glum once the credits commence. Yet it’s the way in which it moves, subverting your expectations in forgoing incredulous twists, in turn being beautifully impressionistic. At its most basic, the core of Pig is about being alive, as painful and as awful as it can be at times.

Deep in the Oregonian wilderness, we happen upon Rob, played by a grizzled Nicolas Cage. A once-venerated chef, he’s resorted to a hermetic life, his only companion being a foraging pig who can sniff out valuable truffles. Rob sells the truffles to Amir (Alex Wolff), an underqualified salesman who sells coveted ingredients to high-dollar restaurants. Amir pompously arrives at Rob’s ramshackle abode in his canary yellow Camaro, trying his best to undercut the fact that he’s dealing with a social recluse who can’t even be bothered with small-talk.

As fate would have it, Amir becomes Rob’s only lifeline when individuals viciously assault him and steal his pig. Rob isn’t so much concerned about the money he’ll lose from the lack of truffles. He’s distraught by the theft of one of the last things about which he cares. Thus, Amir is forced to be Rob’s chauffeur when the two head to Portland in effort to retrieve the animal, with Rob — bloodied, bruised, and donning the attire of a rag-picker — being reacquainted to the cold, unfeeling underworld of fine-dining.

“There is no loop,” Rob barks at Amir when his buyer angrily says he’s being kept out of the loop of the entire trip. “I’m finding my pig. You’re not part of a loop, you’re my ride.”

You already know a film is going to be good when it plunges you into the underbelly of five-star restaurants. Without overstepping into spoiler territory, Sarnoski devotes time to seedy dealings between restauranteurs and salesmen over the minute ingredients that set establishments back a star in their branding if they’re not up to par. Furthermore, the sheer presence of Rob is felt once he’s recognized. He’s revered despite being long gone from the public eye. You get the idea he never wanted any glory. He simply wanted to serve quality food.

Rob is a relic of the good ol’ days. He’s someone we’re led to believe carried out his day-to-day business with a morally conscious attitude — on top of being someone who valued the art of cuisine. Then big business and its shady practices infiltrated on his happy slice-of-life, taking what they believed was theirs, shortcutting the process, and distilling the craftsmanship right out of the experience until what was left was an antiseptic, glossy piece of architecture with no soul. Sound familiar? Welcome to America, where we seldom find industries we can’t drain of their integrity.

Consider what is arguably the best scene in Pig. Deep in the second act, Rob sits down at a prestigious restaurant in Portland alongside Amir — who is already on-edge because this is one of his father’s clients and he’s stepping on toes just being there. It’s the typical restaurant you and I likely couldn’t afford on our best day, priding itself on outrageously overpriced meals you could finish in two spoonsful. God love ya if you can pronounce the entrées too. Moreover, Rob eats one of the dishes with his fingers. The chef (David Knell) is floored to recognize Rob, but is left speechless while he harshly criticizes the dish (and the establishment) for lacking everything save for pretentiousness. Rob even reminds the chef that is was he who was once gunning to open a pub, but fell down the same, cynical path of chefs who prioritize humungous profit margins over culinary craft. These charged words are delivered by Cage with an understated imposition.

When he’s not driving angry of wayward in Wonderland, Cage can deliver a knockout performance like the one he gives in Pig. He’s always had it in him. In a manner not unlike the way Adam Sandler gut-punched the masses with his thrilling turn in Uncut Gems, what’s long been frustrating about Cage (and Sandler) is they’ve proven they can leave us with our mouths agape. That is, when they want to. Otherwise, they settle for middle-of-the-road productions or downright dreck that further obscures their real talents. Cage is brilliant here; in actuality, he operates on a plain comparable to the one he did in David Gordon Green’s Joe.

We keep waiting for Cage to snap like he so often does. We keep anticipating him slamming his palms on a table before grabbing its ends, turning it on its side, and grabbing a waiter by the collar and screaming something to the degree of, “where’s my motherf*****g pig?!?!” That moment never arrives. Sarnoski, in his debut feature, is measured at every step, knowing when to heighten the tension through tone and when to loosen his grip. This is a movie less about revenge, or even a pig. It’s a movie about principle and the painful realization of there being desperately few tangible things in life we care about enough to commit to preserving.

There’s a good chance Pig falls prey to being shortchanged to the movie where “Nic Cage chases after a pig;” kind of like how Queen & Slim became unfairly deemed “the Black Bonnie & Clyde.” But that’s only for those not wise enough to give it a shot and be treated to a standout directorial debut and a sobering reminder of the legend that is Nicolas Cage.

NOTE: Pig is now playing in theaters and available to rent on multiple streaming platforms.