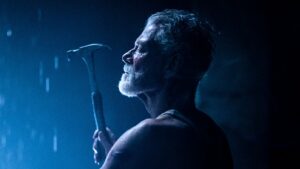 If Don’t Breathe was the “merciless, nasty thriller” I billed it back in 2016, its sequel is downright evil without being half as much fun.

The lack of recognition for Don’t Breathe in the wake of A Quiet Place not even two full years later always stuck in my craw. Here was a film that used sound as a menacing device, playing to the auditory senses of the viewer not merely in the way of jump-scares but in pure, impending dread. Its goriness might’ve come a tinge too late following the apex of the Saw franchise, but it was still a movie that managed to gross over $150 million worldwide in lieu of sterling reviews — especially compared to its contemporaries.

Along comes Don’t Breathe 2, which should be expected when you have a sleeper-hit of sorts. The original film left on a discouraging note indeed, but it suggested a follow-up, as all good horror films do. Where it could’ve built itself upon the idea that the lionization of all military veterans might just be a little misplaced, Don’t Breathe 2 takes the path favoring blunt-force. It relentlessly clobbers you over the head with excessive violence and so little tact that, if you paid to see it in the theater, you might very well question why you weren’t watching it in a more conducive setting. That setting is one where you didn’t have to leave your house, let alone put on pants. This sequel has straight-to-DVD/VOD written all over it. During a time when moviegoing, even if vaccinated, comes with a certain risk, the extra effort Don’t Breathe 2 demands of the viewer feels particularly uncouth.

Co-written by Uruguayan filmmakers Rodo Sayagues and Fede Álvarez (also director), the original Don’t Breathe was an enjoyable dash of mean-spirited horror about a trio of thieves who break into a wealthy blind man’s house, only to discover he’s not only hiding money. Stephen Lang played said blind man, former Navy SEAL Norman Nordstrom (Stephen Lang), a violent kidnapper who, by the end of the original film, seemed irredeemable in his own pit of misery. Don’t Breathe 2 tries to gift him an unneeded redemption tale, solidifying the fact this was a film that didn’t need a sequel, although the efforts of Sayagues and Álvarez shouldn’t be shortchanged. They were likely a victim of Sony’s demands after such an unexpected hit.

Beginning eight years after the original film, Nordstrom is living with an 11-year-old girl named Phoenix, played by Madelyn Grace in her film debut, who believes he’s her father. Nordstrom painstakingly teaches Phoenix survival skills, but doesn’t dare let her venture beyond his humble abode. When a group of former military-men (one of whom played by the very underrated Brendan Sexton III) strong-arm Nordstrom’s house and target Phoenix, gradually revealing details that suggest they’re more contemptible individuals than Nordstrom, we the viewers have ostensibly no choice but to sympathize with the man we grew to loathe and loathe heavily just a few years ago.

Make no mistake in seeing Lang as an unnerving presence who utilizes his screen-time deftly. Even with more dialog than necessary, Lang carves an ominous presence out of an unhinged maniac who relentlessly protects and pursues depending on what a given situation demands. It’s too bad Álvarez and Sayagues disregard his physical presence and turn him into someone who is impossibly unknowing, on top of being the subject of a redemption arc for which he is unworthy.

One masterful scene exists in Don’t Breathe 2, and it happens relatively early. It involves Phoenix stealthily navigating her “father’s” home once the break-in commences, with Sayagues’ camera following her in one long, uninterrupted shot. The effect is quite chilling. Not only does it disregard a tempting continuity break, but it amplifies the presence of sound — or lack thereof. It reminds you why you even desired to see a sequel to Don’t Breathe in the first place. But after one too many loud gashes to the head and several conveniences, you realize that while fortune might favor the bold, the bold wasn’t favored in this instance.

My review of Don’t Breathe