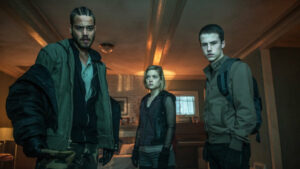 When Uruguayan director Fede Álvarez came on the scene in 2013 after directing Evil Dead, the remake of the Sam Raimi horror classic, the film’s averageness prevented many, myself included, from really writing him in as one of the most prominent horror directors with the most potential. A few years passed, directors like Ti West, Adam Wingard, and James Wan continued to make names for themselves, while Álvarez stayed on the sidelines, acquiring a handful of projects and taking his time with them. Now, in the dog days of summer comes Álvarez’s follow-up film Don’t Breathe, a merciless horror film that shuts you up just as you’re about to say home-invasion thrillers are played out in the genre of horror.

Don’t Breathe is as taut as it is twisted, suspenseful as it is sick, and nerve-wracking as it is nasty. It’s the first horror film of the year that I’ve seen (save 10 Cloverfield Lane unless you really want to count it as a horror film) that doesn’t rely on cheap jump-scares, and when it does, actually gives you a reason to jump. Despite boasting a series of contemptible and unlikable characters, Álvarez and co-writer Rodo Sayagues almost give them each payback for their actions by making them maneuver through a rigged and dangerous obstacle course that is a dark home in the midst of an abandoned area. And just when you think it’s safe to move, whisper, and even breathe, it’s as if a deafening echo that comes and goes with the wind tells you “don’t.”

The film is set in one of the many dilapidated, abandoned villages of Detroit, where three young punks – Rocky (Jane Levy), Alex (Dylan Minnette), and Money (Daniel Zovatto) – have gone around burglarizing homes for a couple thousand dollars worth of belongings, never cash, in order to sell them off and get money to move to California. The trio, however, are willing to break their cardinal rule when they get a tip about an old, blind war veteran (Stephen Lang) who lives in the heart of one Detroit’s most desolate areas. His small, ramshackle home looks like an unpromising shack to many, but inside lies $300,000 from a settlement that was reached after his daughter was struck and killed in a car accident.

The three decide to go through with the robbery, but things go back right after they put the blind man’s vicious rottweiler to sleep. An attempt to find and obtain the money results in the death of one of the three early on, leaving the other two to defend themselves against a war-vet who has seen it all but hasn’t. The two become trapped at the mercy of the man as he secures doors with more locks than even a survivalist owns and boards up windows as if it’s just another abandoned home on the block. As the night winds down into daylight, the cat-and-mouse game occurs all over the home, with all three fighting for survival.

Despite the three leads, and even the blind man, all being unlikable people throughout the entire film, the performances are strong across the board. In particular, veteran character-actor Stephen Lang gives a tremendous performances that relies a great deal on physical presence and aura. In most scenes, his character is less a person and more a towering and unpredictable force of danger, using his other senses meticulously and powerfully to make up for his inability to see. He owns his role and makes it the terrifying support-beam to hold up and withstand the film’s premise throughout.

Don’t Breathe does indeed house a few missteps and inconsistencies. There’s the opening sequence, for one, which just decides to almost entirely ruin the outcome of the film, in addition to the flawed robbery plan from the get-go, as the three characters sit outside the home after the blind man has taken his dog for a walk when they could’ve had an even easier time breaking into his home. Yet all of these seem minor, even if they’re not, in the grand-scheme of the way the film keeps amplifying the energy and making each moment a chilling and suspenseful one. Certain things can at least be partially forgiven when you have a film this sound in many regards.

At times, Don’t Breathe is gut-wrenching – including one particular moment at the end I wouldn’t dare ruin that resulted in audience shrieking and cackling – but quite frequently intense and fiercely watchable. It’s the kind of horror film that makes you squirm and, in turn, it’s the kind of horror film you thank and laud for having the guts to make you squirm. In a sea of supernatural horror films that are afraid to show you too much and settle for little, Don’t Breathe is a film that shows you everything and more that you came for.

My review of Don’t Breathe 2.