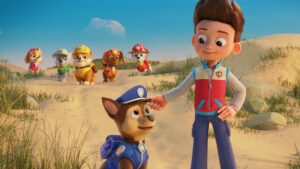 Now here is one of the better surprises of the year. PAW Patrol: The Movie is a delightful animated spectacle that could serve a child well as their first movie experience on the big-screen. If we’re lucky, we get one of these G-rated gems a year that serves that purpose. The film adaptation of the beloved Nickelodeon program that has been going strong for eight years certainly qualifies.

While its ability to captivate adults may not reach the levels of Pixar (few animated works do, mind you), PAW Patrol: The Movie is sneaky in offering up relatable depictions of anxiety and depression in a manner communicable to young children. The affected character is Chase (voiced by Iain Armitage), a pup who shoulders the lofty responsibility of being the top police dog on PAW Patrol. He belongs to a troupe of adorable hounds all a part of a rescue operation squad that police the idyllic community of Adventure Bay. They’re galvanized by a young human named Ryder (deftly voiced by newcomer Will Brisbin).

Early in the film, the squad uproots from Adventure Bay to the crowded streets of Adventure City after a frantic call from a spirited little dachshund named Liberty (Marsai Martin) informs them that the contemptible Mayor Humdinger (Ron Pardo) has won an unopposed election. Humdinger wants to turn the otherwise functional Adventure City into a haphazard playground for his self-indulgent antics. He strongarms his way into holding a dangerous fireworks display (after convincing scientists to use experimental technology to consume rain clouds so as not to ruin the fun), and is trying to rid the city of dogs to make room for his army of cats.

While the PAW Patrol has their paws full from the moment they set foot in Adventure City, Chase is battling his own demons. Ryder rescued him in Adventure City many years ago, when he was a helpless stray narrowly struck by a speeding car. He develops PTSD upon returning to his hometown. The paranoia of being an unaccompanied puppy flood his mind. But like the true hero he is, he’s worried about letting his team down. Or worse, causing an accident that will put them in danger. None of this has happened yet, at least not to the extent Chase believes it could. However, the pressure Chase feels is immense.

PAW Patrol: The Movie is punctuated by high-octane sequences of the titular squad coming to the aid of the masses when Mayor Humdinger’s schemes, many of which exhilarating in their own right. The drama engulfing Chase keeps the material grounded on a relatable level. It’s a tricky balance the trio of writers (Billy Frolick, director Cal Brunker, and Bob Barlen) pull off commendably.

Beyond that, the animation is impressive as well. Vivid lighting and textures articulate a strong contrast between the peaceful living of Adventure Bay versus the bustling nature of Adventure City. The setting is bright enough to be attractive, yet not in the way of candy-colored vomit we’re used to seeing with animated properties that occasionally produce sensory overload. The restraint Brunker exercises is clear. He wants this film to be as much about story as it is about the eye-catching environments we witness.

While I could’ve done without the villainizing of cats — although I’ve come to expect it — I will say it wasn’t enough to deter my enjoyment of PAW Patrol: The Movie, one of the most structurally sound and resonant animated films of the year.

NOTE: PAW Patrol: The Movie is now in theaters and streaming on Paramount+ at no extra cost to subscribers.