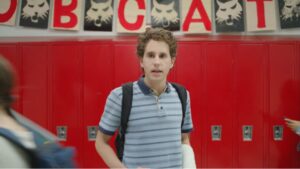 American cinema still hasn’t found a way to touch on mental illness with any sort of poise. As such, it’s a shame that Dear Evan Hansen will be the film of that breed most will see this year. Adapted from a book by Steven Levenson, which became a Broadway sensation in 2015 when Benj Pasek and Justin Paul turned it into a musical, here arrives the film adaptation with the story’s flaws and misgivings on display for an even larger audience to witness.

With each passing musical number, one almost forgettable as the next, the more unnerved I got. Anyone who has suffered from mental illness or witnessed someone who has deserves far better than the loathsome protagonist and empty platitudes this film has to offer.

We’re introduced to Evan Hansen, a high school pariah with nary a friend save for the smug Jared (Nik Dodani). He returns from summer break with a cast on his left arm after falling from a tree. He longs to talk to his crush, Zoe (Kaitlyn Dever), but his anxiety cripples him. His therapist has suggested he write letters of encouragement to himself, beginning with the opener “Dear Evan Hansen.” When Zoe’s troubled brother Connor (Colton Ryan) snatches one of Evan’s letters, and proceeds to scoff at Evan’s lovelorn thoughts about his sister, only to die by suicide, Evan is thrust into the arms of a grieving family in search of answers.

Being that Connor had Evan’s self-addressed letter in his possession at the time of his death, his family — mother Cynthia (Amy Adams) and step-father Larry (Danny Pino) — believe that Evan was his only friend. Evan plays along with the charade, garnering fame, the respect of his peers, and eventually, the love of Zoe, all at the expense of Connor’s legacy.

Much has been made about the then-27-year-old Ben Platt reprising his role as the titular teenager. As you can probably gather from the trailer, it’s as miscast as it appears. For all the flack Martin Scorsese got for using the latest in de-aging technology in The Irishman, the practical efforts to make Platt appear roughly ten years younger than he actually is fail miserably. Platt’s outfits are hemmed in obvious ways that attempt to make his body resemble that of a teenager. His face is unmistakably that of a grown man’s. The beauty of the stage is that most audiences are too far away to notice makeup and performers older/younger than the characters they play. Stephen Chbosky’s camera favors overdirected closeups of Platt’s face, therein exposing the startling age gap.

It is fair to mention that both Dever (who I adored in Booksmart) and Dodani are 24 and 27-years-old, respectively. No less, they still look their parts thanks to their costuming, but mostly their inherently youthful features. Compounding Platt reprising his role when it truly should’ve went to a younger counterpart is his contemptible arrogance in responding to the justified criticism. In multiple interviews, he’s stated that many couldn’t imagine another person playing Evan Hansen, or that this play/movie wouldn’t have happened without him. What a bold move to draw such indulgent cards for a story’s that’s supposed to be about the constricting forces of mental illness and anxiety.

With all due respect to Platt’s vocal prowess and career, my response is simple. Get over yourself. Among many problems with this story, the self-aggrandizing nature of Dear Evan Hansen bleeds through the picture like an unbandaged wound. The musical numbers — beyond being rife with artificiality in their lyrics and basic, department store-appropriate arrangements — are edited in such a way that favor Platt’s Evan, often cutting to the most random angles of his face. Disbelief is next-to-impossible to suspend when the editing constantly draws attention to its protagonist. Evan’s ticks and unsteady hands are conveyed in overwrought fashion, and Levenson’s dialog has characters speaking like they’re from another planet.

When Evan first sits down with Connor’s parents over dinner, Cynthia asks what him and her son did together. “To the trees,” he mumbles to himself. “Oh, you mean the orchard?,” Cynthia responds. Then Evan’s story about how he broke his arm changes to it having occurred when him and Connor were climbing trees in the family’s favorite vacation destination. Most illogical.

Dear Evan Hansen chooses to paint those who suffer from anxiety and depression in the most damning light imaginable. Evan’s subterfuge is rendered even more selfish when he tasks Jared with creating fake email exchanges between him and Connor to present to the family. As the ball keeps rolling, Evan plays along, soon roping in Alana (Amandla Stenberg), another schoolmate who suffers from mental illness and whom worked alongside Connor on a couple projects. Alana is the most likable character because she appears the most genuine.

Meanwhile, it’s difficult for Dever and Dodani to make something out of their characters because every time they get their moment, Chbosky’s camera returns to Evan, reminding us incessantly that quite possibly the most disgusting character of 2021 is the star of this awful show.

With the exception of the spirited ditty “Sincerely, Me” — engagingly adapted to the screen by having Connor voice the fake emails as they’re written/rewritten by Evan and Jared — Pasek and Paul’s songs ring hollow in both presentation and message. It’s not enough for Evan to harass a grieving family with lies about his friendship with their late son; it’s another to subject them to one garish ballad after another.

It’s the apathy that stems from Dear Evan Hansen that might be its cruelest attribute. The apathy of Evan’s horrible actions the longer the charade goes. The apathy in his disregard for the feelings of Connor’s family, most of all Zoe (at least the film spares us a PG-13 sex scene). And finally, the apathy in how the truth comes out and the final shot, once again, is all about our loathsome protagonist and his problems.

The brain is the only organ that, when it fails, we are quick to blame the person and their alleged weakness as opposed to the rampant unfairness that is life. Rather than tell a true story of fighting such a taxing battle with one’s self, Chbosky and Levenson are keen on delivering cloying platitudes and easy answers where none exist. To present it in a package that still encourages us to root for the person despite his horrible actions is no film I can nor will ever get behind.