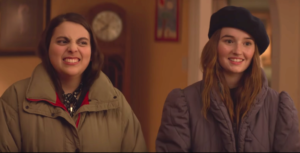 If you’re a teenager who lived on a steady diet of high school movies before experiencing the four years yourself, you might have been led to believe that high school is a cruel and unforgiving place. A place where the halls greet you with unfriendly faces; where bullies lurk at every bathroom and locker waiting to give you a swirly; or where an uninvited guest at a house party would provoke stares from other partygoers and immediate chastising. That simply isn’t the reality. Don’t underestimate the compassion and empathy in teenagers, and furthermore, don’t underestimate the quality and laughs in Olivia Wilde’s directorial debut.

What a refreshing joy a movie like Booksmart is. Here’s a film written and directed by somebody who understands comedy is about tenderness and sympathy for the characters as much as it is gut-busting antics; there’s plenty of both here. Kaitlyn Dever and Beanie Feldstein are a ride-or-die dream-team, equipped with their natural, intoxicating charm in addition to a wonderful screenplay by four writers (Emily Halpern, Sarah Haskins, Susanna Fogel, and Katie Silberman) who pack so much heart and awkward hilarity into a tight, riotously funny package. It’s a total blast on many levels, and one of the reasons I predict it’ll have staying power is thanks to its confidence in balancing humor and the realities of high school, rough edges and raw emotions and all.

Booksmart is structurally similar to Superbad, right down to the way its third act shakes out, but it’s much more than a clone of another great coming-of-age film. The film follows Amy (Kaitlyn Dever, Last Man Standing) and Molly (Beanie Feldstein, Lady Bird), two overachieving high school seniors on the eve of their graduation. Amy is headed to Africa for the summer to help impoverished locals while Molly is going to Yale (she humbles herself to her classmates by saying she’s bound for New Haven), and the two have spent their entire academic careers, thus far, playing things safe and hitting the books as hard as possible. On the flip-side, they haven’t enjoyed the freedoms of a high school party, and this becomes troubling for Molly when she sees that her partying peers have too been accepted to elite or very good schools. Molly convinces Amy to embark on an unforgettable rendezvous by going to the final party of the year thrown by an acquaintance, sweetening the deal by telling her that it might be her last chance to talk to a cute girl Amy has had her eyes on all year. 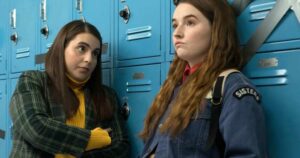 At the center of the film, and integral to its success, is the chemistry between Dever and Feldstein, who radiate lifelong best friend vibes. A recurring moment between the two is whenever they get dressed up, they take it upon themselves to shower one another with corny but heartfelt compliments about the other’s beauty. It’s a small detail at which some may roll their eyes, but it only further gives credibility to their closeness as friends and genuine emotion being a focal point in the picture. In one instance, Molly browbeats herself, feeling unattractive and uncool. “Don’t you ever talk about my best friend like that again,” Amy claps back, and the look in her eyes says she’s not playing around.

This beautiful connection is something Wilde retains focus on throughout, even as the night persists and the antics become increasingly more prevalent. But whether it’s a sequence on Jared’s (Skyler Gisondo, Vacation) yacht, where he tries to buy affection from his peers, or the ubiquitous Gigi (Billie Lourd, American Horror Story), who seems to have tabs on every party in the area, the situational comedy never buries Amy and Molly under comic dead-weight. In fact, it’s in many of these moments that the prowess of Dever and Feldstein as quick-witted, reactive performers shines the brightest.

Wilde dares get a little experimental, at times, including incorporating a drug-trip sequence that is not as perfunctory nor as juvenile as you might think. On top of subtly loaning itself to a cheeky jab at body-positivity and self-image, it just so happens to be uproariously funny in all the right ways. Yet none of this would be nearly as memorable if Dever and Feldstein weren’t so damn good. After some thought, I feel a large contributing factor to this is because both of them are allowed to play a pair of female friends that do not concentrate on the facetious elements we see women in films talk about time and time again. Amy and Molly are witty and lively because they’re not constrained to pine for men, relationships, and materialism. There’s an equitable amount of bravery the two demonstrate as well as vulnerability, something that will hit home for a lot of young female viewers even if they can’t immediately put their finger on the pulse of it. 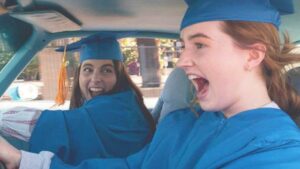 The adult supporting characters are just what they need to be. Jason Sudeikis doesn’t overplay his hand as a carefree principal and part-time Uber driver (in another memorable scene), Jessica Williams gets enough screentime to be a likable voice of reason, and in the brief time we see Amy’s parents (Will Forte and Lisa Kudrow in gloriously hammy bits), we get quality laughs from their obsessive nature over their little girl graduating.

Much has been made about minority representation in American films, whether it be visibility for those marginalized by race, gender, or sexual orientation. I feel such visibility is necessary for film to continue to prosper in America; the more unique and different stories that can be told, the better, as it makes our empathy grow stronger. But we must demand quality from those works that put representation at the forefront. We must not simply give filmmakers a pat on the back for being inclusive, and praise a film simply for existing.

It’s been a blue moon since I’ve seen a mainstream comedy as wickedly funny, poignant, and pleasant as Booksmart. From its up-and-coming leads to its laudable even-handedness at making sure there is a sound emotional core in its central relationship, on top of in the picture itself, it’s a treat to see this kind of film get made and get made well. Make time for one of the first truly spectacular films of the year. The fact that it’s a comedy with universal acclaim should tell you all you need to know.

My review of Don’t Worry Darling