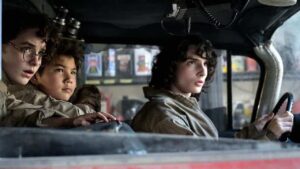 Ghostbusters: Afterlife is tailormade for the crowd who can’t help but make YouTube compilations with tempting titles like: “Things You Missed in the New ‘Ghostbusters’ Movie!” It’ll certainly have Redditors sharing photographs of all those overlooked elements as well. For the rest of us, who want to be engaged by a new story as opposed to frivolous Easter eggs, Afterlife does little to impress. It presents an adequate framework filled with messy details, and a cast of new faces who fail to leave an impact.

After having to endure the trailers for nearly two years — it was originally set for a July 2020 release date — a credit is due to the marketing team for leaving several elements as unknowns. I’ll adhere to their due diligence and simply give you the broad outline of the plot. While the original Ghostbusters team does appear, the primary characters this go-round are a single mom named Callie (Carrie Coon), her teenage son Trevor (Finn Wolfhard), and 12-year-old daughter Phoebe (Mckenna Grace). They’re evicted from their apartment at the same time they learn that Callie’s estranged father has passed away after languishing on a remote farm in Oklahoma. Penniless and debt-ridden, he’s left them nothing but mounds of dirt and old junk.

The family decides to set up camp on the farm. Not a lot of time passes before Phoebe, a precocious science nerd, unearths a hidden lab rife with ghostbusting equipment. While she’s messing around with ghost-traps and a PKE meter, Trevor gets to work on the old Ecto-1 in the garage. Even as they’re relegated to being pariahs in a tight-knit town, the two do manage to find some friends to go along for the ride, including Trevor’s crush Lucky (Celeste O’Connor) and Phoebe’s classmate known as… “Podcast” (Logan Kim), a self-appointed nickname because of his love of podcasting. Yeah, that’s where we’re at here.

One of many questionable plot-points writers Gil Kenan and Jason Reitman (son of Ivan Reitman, director of the original Ghostbusters, who also directs) insert is the presence of Mr. Grooberson (Paul Rudd), Phoebe’s summer school teacher. Why Phoebe has to attend summer school when she’s flat-out brilliant and flaunts it at every turn is a greater mystery than how much more satisfying the infamous script for “Ghostbusters III: Hellbent” would’ve been over this generational sequel. Rudd is game for Afterlife from his first appearance, but Kenan and Reitman limit his character to being a local seismologist and ostensibly the only living person who remembers when the original Ghostbusters attacked Stay Puft atop a skyscraper 35 years ago. He’s present to remind us how impacting that movie was as opposed to the cheap exercise in fan-service we’re watching now.

Let’s talk about the setting too. While Afterlife is gifted a drastically different color palette from the previous two films (like everyone else, I’ll ignore the 2016 reboot), the town of Summerville is the kind of idealized small-town American town conceptualized by studio-heads who have never set foot in one. There’s evidently only a local Walmart and a drive-in restaurant in the entire town. At one point, Mr. Grooberson finds himself overwhelmed by the presence of marshmallow ghosts, who inexplicably come to life in the grocery store aisle. You can’t tell if he’s hallucinating or not because there’s not a single soul to be found in the entire store. Plus the drive-in carhops feel like they’re in a completely different movie. American Graffiti, anyone?

When the original Ghostbusters crew does turn up, you realize that the surviving trio of Bill Murray, Dan Aykroyd, and Ernie Hudson slip right back into character as if no time has passed (Harold Ramis passed away in 2014). However, Reitman treats it as just another vapid callback before running through perfunctory chase-scenes and a climax that’s anything but inspired. It’s as if everyone involved spent so much time piling on references to a beloved, cultural touchstone that they forgot to conjure up an exciting story that would entice a new generation — the proclaimed purpose of Afterlife.

Ghostbusters: Afterlife is yet another legacyquel that will come and go, barely leaving a footprint and reminding us yet again that warm fuzzies are momentarily satisfying, but don’t contribute to a quality film. This isn’t the “Ghostbusters III” we deserve after three decades and broken promises. It’s what’s to be expected in 2021, churned out by an industry obsessed with the past and a culture that eats it up while emptily demanding “original stories.”