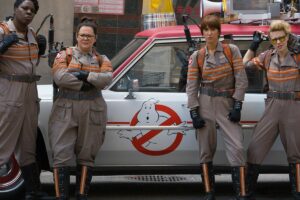 For months on end, the internet has been whining and bemoaning the existence of the Ghostbusters reboot, featuring an all-new female cast. Perhaps it’s the fact that, for two decades now, loyal fans of the franchise has been teased, taunted, and downright lied to about the failed Ghostbusters III, or the fact that nostalgia and childhoods were inexplicably corrupted by this film’s existence. Admittedly, there wasn’t a need for this movie, and the end result isn’t stellar, but it is a remarkably fun, highly energetic picture that does, in some sense, capture the horror and comedy elements of the original films.

The film initially introduces us to Dr. Erin Gilbert (Kristen Wiig), a professor pining for tenure at Columbia University, who is mortified to discover that an extensive book she co-authored with her school-friend Dr. Abby Yates (Melissa McCarthy) is still being sold online and in bookstores. Erin believes that if Columbia administration found out about her background as a believer in and an author of the paranormal, she’d be fired and laughed at (apparently Columbia doesn’t do background checks). She tracks down her old pal Abby only to find out that Abby is adamant about pursuing a career in capturing ghosts, along with her new friend Jillian Holtzmann (Kate McKinnon).

When the three wind up going to a mansion rumored to be haunted and seeing a ghost, they decide to open up their own paranormal investigation firm that revolves around capturing and studying ghosts and under entities. Their newfound career is only solidified once Erin is fired, they hire a handsome but incompetent receptionist named Kevin (Chris Hemsworth), and recruit a fourth member, Patty Tolan (Leslie Jones), a wise, street-smart subway employee who knows New York better than anyone.

The film was directed by Paul Feig and feels every bit like a Feig movie in the regard that the humor is predicated upon prolific one-liners and obvious comic situations. A lot works and a lot doesn’t is the best way the film’s comedy can be summarized. Kate McKinnon winds up being the most uproariously funny breakout female actress this year alongside Melissa Rauch in the underrated Bronze, even with a criminally shortchanged role heavily bent on reactionary impulses and goofy mannerisms. Whether she’s momentarily regulated in the foreground or carelessly shifted to the background, McKinnon’s facial expressions and mannerisms are always speaking something and she’s hilariously funny, even working with such a light and airy performance.

The other three female leads are mostly charming, as well, with Wiig giving her trademark shy and reserved role with a bit more confidence this time around, while McCarthy is pleasantly toned down and actually frequently funny just being herself in a different way (perhaps the less liberal PG-13 rating worked better for her). Whatever brazen, physical energy McCarthy lacks here is picked up by Jones, who is unfortunately only sporadically funny with a character who ostensibly has to shout every line and overplay nearly every circumstance. One of the only speculations about the film’s massively disliked trailer was that Jones’ character would be an unremarkable stereotype, and sure enough, she’s little else besides one.

The film also evokes evident commentary about the way female Ghostbusters are perceived by the general public. A subplot in the film revolves around the New York mayor and state government trying to silence and repress the Ghostbusters as both a business and a social service somewhat in part because of the state’s public image but largely in-part because they are allegedly a disturbance and not qualified. As a result, the Ghostbusters need to prove their worth under impossible standards and misconceptions, which sounds all too familiar with the pre-release buzz regarding this film.

A handful of things do not work with this film. As stated, the humor is rather inconsistent, the action is a bit haphazardly directed and muddled, similar to how Feig had difficultly directing the action sequences in Spy, and Chris Hemsworth’s character is both worthless and unfunny. However, the film is the rare summer “blockbuster” where the end result prompts a lot of high-energy fun, likable characters, impressive star-power (and a promising film debut for one McKinnon), and a lot of good vibes as a result. It’s rare and it’s pleasant.