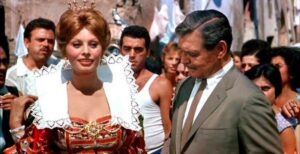 Just a few days out from his wedding, Philadelphia lawyer Michael Hamilton (Clark Gable) makes the pilgrimage to Naples to settle the estate of his late brother. Armed with an Italian lawyer and a pocketbook dictionary, this is his first time visiting the southern Italian city since World War II. In Naples, he discovers his brother had a son; an eight-year-old named Nando (Carlo Angeletti), who is being cared for by his aunt Lucia (Sophia Loren). She’s a twenty-something cabaret singer, not terribly unfit to care for a child but clearly with other ventures on her mind.

Michael’s brother, along with his wife, drowned in a boating accident, while his lawfully wedded wife, whom he left in 1950, is still alive and clueless in Philadelphia. Turns out, Michael’s brother blew his riches via a firework investment, and his son Nando is left roaming the streets of Naples, hawking pamphlets that advertise his aunt’s risqué shows. It’s no life for a young boy. After taking a liking to Nando, Michael wants to take him back to America where he’ll have a real shot at opportunity. It goes without saying, much to the dismay of Lucia.

The penultimate role for Hollywood legend Clark Gable, It Started in Naples is little more than a footnote in his storied career. It’s not too difficult to see why. This is a fluffy, flyweight picture, with a touch of Woody Allen spirit that makes its comedy chuckle-inducing and its drama momentarily felt. Still, it has some positive elements that make it an amusing watch.

The film was shot on-location on the isle of Capri, which is presented as nothing less than an exotic slice of paradise. It’s a cozy, boozy enclave offering ceaseless street-life, bottomless beverages, and a sensual charm which we can only assume has put many bachelors in a similar situation to Michael’s brother. Moreover, it provides a comfortably uncomfortable balance of romantic and cultural shock for Michael, who through exhaustive efforts, tries to get Nando to warm up to American ideals.

Over a burger-bar provided by room service, Michael teaches Nando how to create the perfect sandwich. “Do you have a heavy date with a lady later this evening?,” he asks Nando. “No,” he obviously replies. “Onions it is,” Michael follows up, “they won’t need a radar to find us!” He proceeds to tell Nando that life itself is akin to a hamburger. One needs to hold it confidently, taking big bites, or else he or she winds up with mustard on their shirt.

Gable’s Michael imparts bits of wisdom on young Nando in another late-career Paramount venture that showed the veteran actor adding roles of humility to his repertoire. Two years prior to this, he starred in Teacher’s Pet, which as of this writing is my favorite Gable picture. Both movies had his character staring reality in the face. He was no longer a young buck. He saw a new generation of folks with more mature ideals than even he possess well into middle age. 20 years ago, this picture would’ve revolved around Gable’s Michael trying to get intimate with Loren’s Lucia (keep in mind Loren was 20 years his junior at the time of filming). There’s your predictable gallivanting between the two, but it’s never not about Nando for long. Michael sees his legacy about as clearly as Gable probably saw his at the time, and it’s about time both matured long enough to do the right thing and live happily with their decision.

Gable is also quite funny here thanks to a screenplay from Suso Cecchi d’Amico, Michael Pertwee, and Jack Davies (story credit), which gifts him the strongest quips. Loren is a dual-threat of charisma and lovely stage command, shaking and shimmying while singing about “Americano” traditions such as “whiskey and soda” and “rock n’ roll.” For what Angeletti might lack in experience with line-delivery, he makes up for with his bulging eyes and undeniable innocence. Angeletti — who would go on to act under the name “Marietto” for only a brief time before quitting the business all together in pursuit of gynecology — and Gable make a fine pair, and it’s their chemistry coupled with the soft-touch narrative that elevates It Started in Naples from being just another aimless, early-60s comedy.