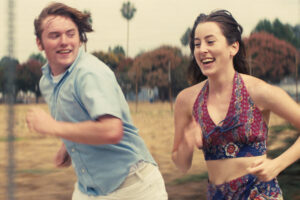 Like most Paul Thomas Anderson joints, Licorice Pizza prioritizes essence over logical plot progressions. Certain segues might leave you mystified in regards to a sudden character’s change in motivations or what exactly their motive was in reciting that particular line of dialog. Thankfully, it casts a spell strong enough to dazzle you where you won’t be burdened by the incredulous circumstances.

James Brown allegedly said at one point during his illustrious career, in regards to his compositions: “if it sounds good and it feels good, then it’s musical.” You can believe Anderson writes his screenplays with a similar mindset. If certain bits make you smile, it was worth it in the long-run. And if we can be sold on characters and their unique dynamics, we as viewers will allow the leap so long as it stays within the confines of the believed world. I suppose what I’m getting at is that Licorice Pizza sometimes makes you wish actual people spoke with this level of eloquence, rather than believe.

It’s all wrapped up in a cozy, dreamlike wonder of a movie that’s biggest sin was it made us wait until the ass-end of 2021 to see the feel-good experience of the year. 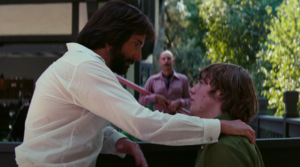 Set in 1973 in the sunny California neighborhood of Sherman Oaks, Licorice Pizza follows the improbable romance of Alana Kane and Gary Valentine, played by first-time actors Alana Haim and Cooper Hoffman (son of Phillip Seymour). Gary is a 15-year-old actor who is finding his footing (and himself) on a professional level, while Alana, 25, is the youngest of three siblings, working as a photographer. The opening scene has their meet-cute set-up more like Gary begging for an audition. He prods Alana in hopes he can let down her guarded exterior so she’ll agree to meet him at Encino’s Tail o’ the Cock restaurant/lounge, where he’s a regular.

Although on his way to becoming a thriving actor, Gary pivots into being a micro-mini mogul. His first business venture is waterbeds, and he convinces Alana to go along with his scheme. She’s the first to inform him that his brand-name “Soggy Bottom” is a woefully unsexy choice. Eventually, the two of them, along with Gary’s gaggle of teenaged friends, are driving a massive box-truck through the crowded streets of Los Angeles breathlessly delivering and assembling these beds, largely for a wealthy clientele — amidst the Nixon-era gas crisis to boot.

In one of the film’s most blisteringly funny scenes, Gary and Alana deliver to the home of Jon Peters, the hairdresser-turned-producer who dated Barbara Streisand for nearly a decade. Bradley Cooper plays the frantic, sex-driven narcissist in all his coke-fueled glory. It’s one of the singularly great performances of the year. I’ll try my best to refrain from saying anymore.

Gary and Alana find themselves drifting and rifting apart a handful of times with Anderson delightfully negating the conventional “big argument” that has the two going their separate ways in dramatic fashion. The bottom-line is the two are 10 years apart in age. No matter how eloquent and precocious Gary can be, he’s still a 15-year-old boy. Later, he has his eyes on a pinball palace while Alana strives to have a far-reaching impact. She’s attracted to a young mayoral candidate played by Benny Safdie, one half of the mind behind Uncut Gems, and starts volunteering on his campaign. 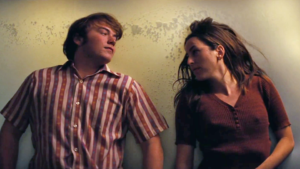 Let’s start with the performances, as there are many of note. Alana Haim possesses a radiant magnetism you simply cannot coach. It’s worth noting that her character’s family is made up of her real-life kin, as Alana is one-third of the musical trio HAIM. When Alana brings her sorta-boyfriend over for the family Shabbat dinner, the confrontation between him and the family crackles with intensity because, after all, we’re watching an actual family operate. It feels as authentic as Alana’s subsequent tirade against her father and sisters.

Hoffman is quite good as well, possessing a contrasting appearance and general nature from his late father. The same way Haim radiates eclectic charisma, Hoffman exudes a doe-eyed optimism only green teenagers can muster. Both actors have a chemistry as prickly as it is loving. Beyond Bradley Cooper’s wickedly outrageous appearance, Sean Penn shows up as a tanned-skin Hollywood veteran who attempts a stunt at the insistence of a movie director played by Tom Waits. Waits chomps on a Black and Mild and recites his lines with his trademark vocal croak. Although she’s only afforded one scene in extreme close-up, Harriet Sansom Harris — playing Gary’s talent agent — owns every line of dialog she’s given as she’s interviewing Alana to see if she’s got what it takes for the film world.

Although unmistakably male in some moments, Licorice Pizza does a commendable job at adhering to the female gaze in a way that doesn’t pander. It comes off as sincere because Gary, in his heart-of-hearts, is sincere himself. Both him and Alana are lying on a water-bed late in the film. Alana is fast asleep. They’re pinkies are touching. Gary is starved for any kind of female contact with the woman he’s fearful of losing. He makes a move to touch her breast, but can only muster a hand-hover. It’s not the time. That time will come. There’s more adventures on which to embark and more sprinting to do while the sweet strings of Radiohead guitarist Jonny Greenwood blare in the background.

Anderson has rather effectively showed the lengths and patience we men will muster in order to obtain our first kiss. And how sweet it’ll be when it arrives. If it arrives. 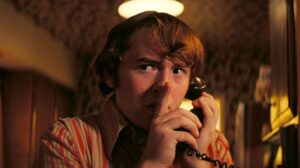 Anderson also does his own cinematography in conjunction with Michael Bauman. The two make visual magic with this sunlit palette that presents this world as lived-in, where every street-corner, lounge, or gated community provides some sort of texture. Mixed in thoughtfully are a handful of tunes from the likes of David Bowie, Gordon Lightfoot, and Donovan. The quiet pleasure is they’re not the tunes you’re going to immediately expect either.

Licorice Pizza has Anderson downshifting from his usual pace. Gone is the threat of danger in something like Boogie Nights; the encroaching suspense of The Master; or the haunted obsession displayed in Phantom Thread. Such a move ends up producing one of his most endearingly wholesome movies to date. Sprinkled throughout are characters and events that children of 70s LA will recall fondly. But you don’t have to be from the golden coast to appreciate such a vibrant coming-of-age drama, incredulity and all.