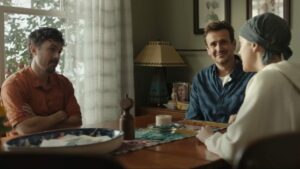 It’s far too early in the year for an emotional gut-punch, but Our Friend is worthy of cutting in line. A masterful story about the resilience of marriage, friendship, and the messiness often brought on by both, Gabriela Cowperthwaite’s film has Jason Segel giving a career performance, Casey Affleck yet again showing he’s one of the best doing it, and Dakota Johnson finally getting the role she’s needed. If you’ve avoided the recent crop of “premium video-on-demand” movie rentals and their $19.99 price-tag, I recommend you encourage a friend or a spouse to split the cost with you and opt for this one. You both deserve it.

Based upon an award-winning Esquire article by Matthew Teague, Our Friend spans 13 years in nonlinear fashion, leaping from eight years in the past, to four years in the present, and so on. We meet Matt (Casey Affleck) and Nicole (Dakota Johnson), a happy couple who meet and marry in Alabama as a journalist and local theatre star, respectively. They have two young daughters, some occasional tumult in their marriage, but everything is relatively happy. Until Nicole is diagnosed with ovarian cancer and things go from bad to worse upon her diagnosis.

Nicole has remained close with Dane (Jason Segel) for most of her adult life, working in theater together. Dane tried to ask her out on a date early into their friendship, unbeknownst to him that she was already married. Nevertheless, Dane remains close with Nicole and forges a friendship with Matt as well, making the decision to move in with the couple to help the family in Nicole’s time of need that much more practical. As for Dane’s life, he’s long been stuck in neutral. He works in a sporting goods store, can never stay tethered to a relationship due to his own apprehensions, and is “thinking about doing standup comedy” — not exactly a statement of grand ambition. Dane’s heart is always in the right place, and his kinship with Matt, his platonic affection for Nicole, and his rapport with their girls makes him a man with a heart of gold. He’s the classic case of a man who can help others more effectively than help himself. 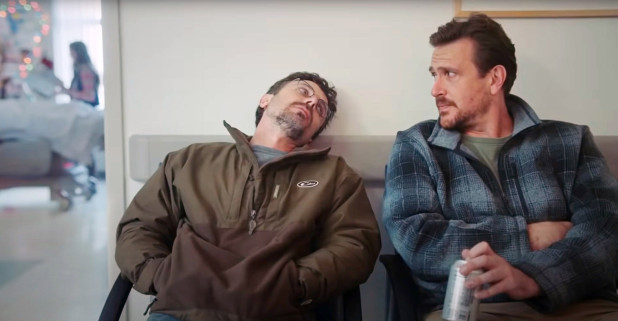 As you may predict, Nicole’s cancer progresses and worsens. This causes great strain on the family, on top of the misgivings that were present before the diagnosis. Matt can grow distant in tough situations, turning into a gloomy shell of a man who broods instead of sooths. Nicole’s moods shift between helpless and borderline-psychotic due to the distress brought on by treatment. Dane can grind both of their gears, but is always on his feet aiding in times of crisis.

All of this is illustrated through two key components: rich acting and thoughtful screenwriting. Affleck gives yet another spectacular performance, humanizing a difficult role by accentuating Matt’s flaws while continuously showing he’s doing the best he can. Many will relate to his imperfect yet mostly pragmatic way of handling the situation. Segel flexes rare dramatic chops in a role where he plays a character who sometimes looks like he’s on the verge of tears for a variety of reasons. Ultimately, however, this is finally Dakota Johnson’s time to shine. After one too many shades of grey, she finds herself in a movie that accentuates her strengths as an actress, showing range and even musical talent in an intense performance.

It’s also worth noting that country singer Jake Owen (famous for teaching us about a “Barefoot Blue Jean Night”) makes his acting debut as Aaron, a smarmy douchebag who is dating Nicole’s mutual friend. In limited scenes, Owen establishes a charisma, more commendable given the elite company in which he finds himself. He might have a future in acting. Keep your eye on him.

Secondly, the most important part of Our Friend is established early on: you believe the friendship of the core trio as screenwriter Brad Ingelsby (cowriter on Out of the Furnace) establishes it. You see how they meet and how they relate, with copious time dedicated to building equity in their interpersonal dynamics. Sure, the movie stumbles a bit in the more dramatized moments, becoming a touch too Hallmark. Sure, the emotional footing can be dampened by the nonlinear structure. But it goes back to the equity Ingelsby builds, showing the mundane details on top of the medication management and the family becoming a fractured shell of itself. You can take risks in your story once you’ve nailed the character development. The audience will follow and adapt, and that’s exactly what happens here. It helps that Cowperthwaite (Blackfish) and Ingelsby prioritize little moments over big ones, such as when Dane meets Matt shortly after asking out Nicole. Or Nicole helping Dane rehearse his comedy routine, holding a spotlight on him while he tells jokes. Matt and his wellbeing is thrust into the focal point as Nicole’s condition worsens, never better articulated than when he takes a drive and sees a gaggle of moms — many of whom so-called friends of Nicole’s — and their children at the park. Matt knows in that instance he had those experiences once, yet the stress of achieving an adequate work-life balance led him not to value them like he should’ve. Now he’ll never get them back. The world keeps on turning, unfazed by his tribulations.

Our Friend is a movie that’s confident in its saddest moments. It knows better than to bombard us with sappy music. It lets the dialog carry those moments, no music necessary. We as the audience then come to grips with the gravity of the situation and don’t have scenes offset with a score that overplays the moment. The nonlinear structure also adds a level of engagement that wouldn’t have been there had it been chronological. We see these people as giving but flawed, compassionate but comprised. It adds a balance that makes for a dimensional character study. More-than-occasional comedy undercuts the overarching gloom, another credit to Ingelsby. While Our Friend doesn’t have you rushing for the Zoloft ala Manchester By the Sea — another Casey Affleck home-run — I suggest you keep a box of tissues near. Maybe two. It’s important to think and feel during these days, and Cowperthwaite’s marvel provides a terrific conduit.

NOTE: Our Friend is streaming on Amazon Prime Video, and available to rent on Vudu and other platforms.