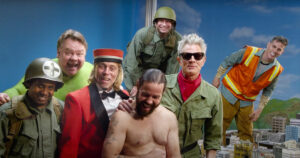 It might’ve been a 12-year wait. We might be down two jackasses two very different reasons. And Johnny Knoxville’s silver fox aesthetic does indeed make him resemble Jamie Lee Curtis. All things considered, Jackass Forever was worth the wait and then some. They proved they’re not Dunn quite yet.

Consider the opening of this fourth theatrical installment that’s now more remembered for its gut-busting movies than the 25-episode MTV series. It’s perhaps the most elaborate one yet. It’s an unabashedly cheesy Godzilla parody, only the kaiju in this situation is Chris Pontius’ penis, spray-painted green and puppeteered by co-creator Spike Jonze. There’s some tricky editing happening as the cast-members act out the mayhem they cause on a diorama amidst busy city streets. Things intensify when mini-rockets are fired at Pontius’ wrinkled scrotum. The film series is now 4-0 with opening scenes.

Jackass Forever makes up for the absences of the late Ryan Dunn and the perpetually troubled Bam Margera by introducing a fun crop of new people into the mix. It’s not quite an official torch-passing, but it very well could prove to be down the road. Among the most notable faces, Zach(ass) Holmes plants his flag by being built for physical comedy thanks to his plus-size physique, which makes him the go-to man for a literal “body-surfing” stunt. He also earns his laughs when most of the crew is locked in a basement with what they believe is a life rattlesnake. Then there’s some goofball who goes by “Poopies,” a rapper named Jasper, whose father “Darkshark” even turns up for a few stunts, and comedian Rachel Wolfson.

Of all the new faces, it’s Wolfson who feels the most underutilized. Her crowning moment comes when she opts for “scorpion Botox.” She reacts to the creature’s stings with such poise that you believe she would’ve held her own during other physically painful stunts.

Then there’s the familiar faces back for the usual brand of insanity. Knoxville is fired out of a cannon into a nearby pond, and later does a full flip after being hit by the bull (and suffers multiple fractures and a concussion in the process). Steve-O gives his penis and scrote the Candyman treatment with a herd of bees. Preston Lacy accidentally craps himself in a moment that made me choke with laughter. Wee-Man taps him and “Danger Ehren” for a brutal triple-wedgie that’ll make your own taint convulse. And when Jeff Tremaine gets involved, you know you’re in for a great time.

Of everyone in the crew, Ehren gets the most hell inflicted on him. Give him (or better yet, his crotch) some props, as he takes nausea-inducing blows from UFC champ Francis Ngannou, Olympian softballer Danielle O’Toole, former Nashville Predators defenseman P. K. Subban, and Dave England on a pogo stick. With the absence of two vets, Ehren and England get pushed to the front more than in previous installments. If this really is the final hurrah with these men, it was fun to see them get greater billing.

Jackass Forever is a bit of legacyquel (or a “requel” as the new Scream put it). That will dawn on you during the closing credits when you see that a handful of stunts are reworked from the previous movies. If you hadn’t noticed by then, you’re unlikely to care, for you’re still sore from laughter all over again. The ceaseless amusement that comes from this relentlessly dangerous display of male bonding will forever be endearing, especially when the highlight reel of idiocy is yet again made so lovingly by men willing to die for their art.

My review of Jackass 4.5