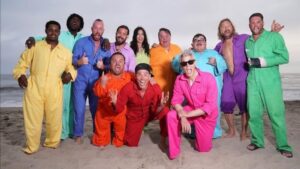 I think even Jackass fans would admit in their heart-of-hearts that most of the previous “.5” films have been sporadically funny, supplemental entries catered towards die-hard fans who can’t get enough of these lovable numbskulls. They’re inessential for most casual viewers of the long-running series, but they’ve been able to provide laughs that effectively hold us over until the next installment, even if takes more than a decade to materialize.

Jackass 4.5 looks and feels different than the previous films of its spinoff breed. It’s likely the last time we’ll see the original crew of Johnny Knoxville, Steve-O, Wee-Man, and others take part in death-defying stunts for our entertainment. It’s a triptych of sorts: a broader documentary of the series, a behind-the-scenes “making of” look at Jackass Forever, and a collection of stunts that didn’t make it into the fourth movie.

As shocking as it might sound, many of the stunts in Jackass 4.5 are superior to those in Jackass Forever. It feels like the crew deliberately saved a lot of the shocking, multilayered material for what they knew was going to be the grand finale. Furthermore, the film lets us spend a little more time getting to know the newbies of the franchise, such as Zach(ass) Holmes, Poopsies, Jasper, and Jasper’s father Dark Shark. It’s a little disheartening that Rachel Wolfson and (even moreso) Eric Manaka feel like nonfactors, underutilized once again.

At one point, the gang stuffs sushi in the crevasses of Zach (who says he’s over 400 pounds), wraps him in saran wrap, forces him to do laps, then eats the sweat-soaked fish. Rachel swallowing a piece whole and not puking, unlike the other members, proves she’s a real one who could’ve taken on more.

The documentary-style allows for some seriously candid moments that make the stunts feel more significant, not to mention better contextualized. The stunts themselves, however, are riotously funny. There’s a baseball game where Zach is the ball; an extended finale featuring Dark Shark facing his greatest fear; Wee-Man and Danger Ehren conducting electricity in the most assinine manner; a crossover bit featuring Jackass staples Irving Zisman and “Party Boy;” and, of course, more penises than you can shake your penis at. Knoxville, Jeff Tremaine, and Spike Jonze even explain why they went so heavy on the male nudity with the fourth film.

There’s even less Bam Margera here than in Forever. By that, I mean absolutely nothing. Not a mention, not an appearance (Margera did have one blink-and-you-miss-it appearance in the “Marching Band” stunt). With the hoopla surrounding Margera and his then-lawsuit against the crew over his firing, it’s not a terribly surprising omission. It just it leaves this series finale with a glaring hole. Alas, it’s still better than seeing any one of these warriors permanently maimed.

Before watching Jackass 4.5, I saw an article saying that Paramount has greenlit a Jackass revival series for their respective streaming service. We’ll see how/when/if that materializes. It might provide some chuckles. It might even be good. But it will never be the generation-defining, unabashedly brilliant work of stupidity Knoxville, Tremaine, and more were able to create and sustain for over 20 years. This was lightning in a bottle. We’ll be lucky if whatever is next is a thunderstorm by comparison.

My review of Jackass Forever