Murder on the Orient Express (2017) review 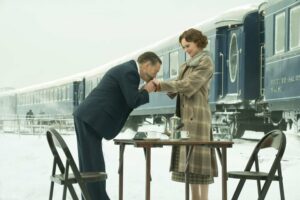 The third adaptation of one of Agatha Christie’s most memorable works reminds you how markedly less handsome Hollywood films have become over the last two decades. I truly can’t imagine the feelings that will wash over the fortunate few who will be treated to seeing the film in 70mm in select theaters and how that will make them yearn even more for the sensibilities and styles of films gone past.

Kenneth Branagh’s Murder on the Orient Express always sold itself as a nostalgic visual experience with nothing new added to Christie’s story. All of the intellectual humor and intricate wordplay from the novel and the original 1974 adaptation is still embedded in this particular adaptation. Those inclusions will be treats for those who love to lament the current state of Hollywood as being an industry that hasn’t made a good movie since when they were the age of most of the actors in the film. I, too, suspect many film-lovers will be entranced with the bygone styles and inspiring decorations that wash over the screen and effectively transport them back to the days of yore, so to speak. Branagh’s film echoes a time when films were far less burdened with an aesthetic so slickly commercial you could edit out chunks of most of them and turn them into car commercials.

The shell of the story is retained with desperately few creative liberties taken. We are quickly introduced to Hercule Poirot (played by director Branagh), an eccentric detective eager to embrace a three-night voyage on the Orient Express after solving a case in Jerusalem. He climbs aboard the luxurious train, makes the acquaintance of most of the train’s occupants, and quietly assumes command of his situation like he often does. Perhaps this is why his most personal conversation – with Samuel Ratchett (Johnny Depp), an arrogant gangster who requests that Poirot be his bodyguard for a hefty sum of money – feels so uncomfortable. For one instance, Poirot doesn’t feel like the smartest man in the room.

Turmoil on the train ensues when a small avalanche derails the train and Ratchett is found savagely murdered in his quarters. Poirot, as he does so easily, takes control of the ongoing investigation, exhaustively making the rounds to speak with each of the potential subjects. They include Judi Dench as a Russian dignitary, Willem Dafoe as a quirky German professor, Josh Gad as Ratchett’s secretary, and Penélope Cruz as a god-fearing missionary.

Months ago, I watched the aforementioned 1974 film, directed by the great Sidney Lumet with Albert Finney cast as Hercule Poirot. It was a film I found bogged down by a stuffy aura with an unsatisfactory roundabout of characters it couldn’t adequately juggle. There’s a core problem in adapting Christie’s novel to film and that’s the fact that there are too many characters with too many motives to effectively hit in two hours. This is one of the reasons the archaic whodunit genre is such a rarity in modern day Hollywood.

Branagh makes the understandable move to root much of the film in Poirot’s point-of-view, a move that offers more stability and development to the central detective than in Lumet’s film, where the character was merely an eccentric shell. However, by doing that, the difficultly comes in trying to paint the additional cast of champions into characters themselves; therein lies the hurdle this new version of Murder on the Orient Express can’t quite complete. It’s great to see Poirot fully realized as a pretentious control-freak, but it doesn’t do much for a dapper Josh Gad, a porcelain-skinned Daisy Ridley, or a proper Leslie Odom Jr. in the long-run.

Yet I’d argue Branagh’s new adaptation is worth it in the long-run for the atmosphere and aura it so beautifully conveys. Cinematographer Haris Zambarloukos, who has comprised a resume of everything from Mamma Mia! to Thor, emphasized the neon blues, the maroon-reds, and the pulsating colors that bring the film to life. With its costumes and sheer elegance, Branagh’s version allows you to get wrapped up in the picture because this aura is so inviting, and don’t be surprised if some of the occasionally monotone dialog has your ears winding down and your eyes perking up; things only get prettier when Poirot and others step off the train and into the pure-white snow.

Murder on the Orient Express is perfect for a Thanksgiving/holiday viewing. While its story may continue to evoke its fundamental handicap involving numerous actors pawing for the limelight, it finds a balance that even Hercule Poirot should be satisfied with, even if that balance allows Poirot’s life-blood, Branagh, inserting himself too frequently into the story.

My review of Death on the Nile