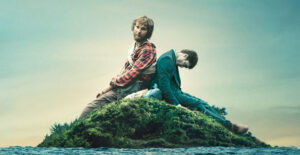 Admittedly, the first twenty minutes of Swiss Army Man had me convinced I was seeing one of the worst films of the year. Its reliance on a one-note joke of a depressed man moments away from ending his life coming in contact with a waterlogged corpse that consistently farted and used his erection as a compass seemed juvenile and sophomoric. And then something happened, and after twenty-four hours from seeing it, that “something” is still more-or-less undefined by me.

The aforementioned depressed man is Hank, played by Paul Dano, one of the greatest actors working today who has yet to get the proper recognition for his consistent greatness, and the corpse is played by Daniel Radcliffe, who has been on a steady track of being the topic of “can you believe he played that character?” roles. Hank is out on a deserted island all alone, mourning the recent downturn his life has taken, when suddenly a corpse washes to shore. Hank quickly discovers that the corpse frequently farts and that his farts have incredible power to propel them both as if they were on a jet-ski.

Hank and his newfound corpse, which he nicknames Manny, make use of this until they wind up stranded in the woods, where they begin to start life anew. Suddenly, Manny begins communicating in a monotone manner, but without the help of Hank in terms of being a physical guide, Manny cannot survive nor attend to his own needs. Hank winds up teaching Manny everything he knows about life, going as far as to providing Manny with a backstory very similar to his own in order for Manny not to feel so alone. Manny also has no conception of social graces and taboos; he can’t begin to fathom why a natural bodily function such as farting is frowned upon in society and why certain imperfections and natural occurrences can’t be embraced. Hank doesn’t have an answer for him. The whole reason he looked to go to a remote island was to get away from everything, with his only point of solace being an attractive woman he saw on the bus but with whom never made any kind of social contact.

The two craft a world in the middle of nowhere, with Hank constructing numerous social scenarios out of tree branches and leaves in order to create a makeshift utopia in which for Manny to operate and experience firsthand. Hank reenacts moments from his own life and attempts to pass them off as moments from Manny’s life to give him a purpose. The whole thing is sweetly odd, meanwhile the title of the picture comes from the fact that Hank uses Manny’s farts as a means of transportation, his erection as a compass to guide him to land, and even his mouth as a razor and a tool to cut things, as if he’s a human Swiss Army knife.

Swiss Army Man, if nothing else, is likely the most original movie of the year, in premise and its approach to its themes. It’s actually very in-line, thematically speaking, with Nicholas Winding-Refn’s marvelous Neon Demon in that we constantly try to find ways to repress reality and look to beautify our own lives, in turn, losing conception of what makes us unique and human in special ways. Furthermore, it isn’t until you see someone or something stripped down to the bare basics of functionality or entirely oblivious to that idea do you yourself realize that.

Hank and Manny share some seriously tender moments amidst all the absurdity; in a scene that would normally come off as perplexing in the way that it’s contradictory, Manny tells Hank he’s afraid of dying because that would mean he wouldn’t be able to have any more adventures with him nor would he ever see him again. This kind of unbridled, raw emotion is rare to find in real-life, much less film, and it’s as if the directing team of Daniel Schneinert and Daniel Kwan – nicknamed as “Daniels” on the film’s promotional poster and opening credits – wanted to predicate a film on what was felt rather than what was commonly said by people.

Unsurprisingly, Dano gives a magnificent and frequently revealing performance that shows just what kind of a powerhouse actor he is at the young age of 32. The same goes for Radcliffe, who very well has one of the toughest performances in any film I’ve seen this year; just like Terry Kiser in Weekend at Bernie’s, Radcliffe must convincingly play dead and lifeless throughout the entire motion picture and giving the impression that he’s nothing more than basically a life-sized stuffed animal for Hank to haplessly lug around.

Swiss Army Man is admirably potent in its themes, but it still has a bit too much fun evoking its juvenile sentiments, which I found largely distracting when it came time to look at the cut and dry emotions of the entire picture. Furthermore, Hank, as a character, is a pretty bland figure to focus on, being that the roots of his depression are never fully examined nor are they adequately expressed beyond just the conventional “fed up with life” cliche. Regardless of my personal indecisiveness and firm stance at the crossroads of admiration and uncertainty, this is the kind of original debut that propels directors and writers to stardom, so expect to see a whole lot of the “Daniels” in coming months. With ideas and promises like this – as they exist and roam around in that Quentin Dupieux-realm of weirdness – you have more than one reason to keep your eyes on them.

My review of Everything Everywhere All at Once