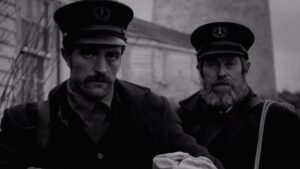 Set in the 19th century, off the coast of New England, The Lighthouse revolves around two lighthouse keepers tasked with a month long assignment attending to a dilapidated post on a remote island. Ephraim Winslow (Robert Pattinson) is a young layman with far less experience than his workmate Tom Wake (Willem Dafoe), a crusty old salt who has seen a thing or two at sea.

The early days are defined by Tom’s caustic attitude commanding Ephraim to do menial grunt work, such as haul rocks and dangle off a flimsy rope and harness in order to paint the lighthouse. The one thing Ephraim is not tasked to do? Attend to the light at the top of the staff. Yet Ephraim and Tom become closer at nightfall as they feast on their platter of slop and drown themselves in rum, which usually segways from Tom bloviating old sailor tales to the two men getting into violent scuffles.

From the deft distillation of Greek mythology personified in its leading duo to the unshakable influence of German expressionism, Robert Eggers’ The Lighthouse is a macabre miracle in a sense that a film like this can still get made and released into hundreds of theaters. Pattinson and Dafoe give fiercely mesmerizing performances, particularly when the two drunkard characters are hurling poxes on one another in a fit of raging masculinity. This is a film primed for a gab and chatter with a lad over mulled wine; one that has supplied me with enough sea-slang to exhaust for the next several months. 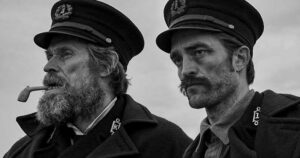 The first jarring detail is the grunting dialog, which is just a hair away from requiring subtitles in some scenes. It’s alarming enough that it requires some adjusting early on, but like old prose, be it Shakespeare or Chaucer, with a bit of time and commitment, your ears prick up and therefore allow you to sink into this microcosm of isolation. Aiding that is the sheer gravitas of the two leads, who, as performers, are clearly enjoying themselves as they jaw at one another, with Eggers camera lingering on their devilishly mean facial expressions. There’s one lengthy shot on Tom’s face as one of his sparring matches with Ephraim goes off the rails, and the shadowy black backgrounds and low-lighting on Dafoe’s features feels like something straight out of Nosferatu (which Eggers is apparently going to remake in the next few years, leaving myself and many others giddy with excitement).

That latter note is no coincidence, for there’s a lot of early German filmmaking and thematic styles that The Lighthouse borrows. The expressionism movement in Germany began shortly after World War I, when filmmakers were toying with the concept of reality and the idea of self as it related to a singular person and their relationship with their peers. Eggers’ sophomore effort draws heavily on films such as the aforementioned staple of early horror along with The Cabinet of Dr. Caligari and Metropolis in a visual sense, letting discomposing darkness or utter drabness set the mood for what is ultimately a moody picture. Shot on black and white 35mm and rendered in a narrow 1.19 aspect ratio (shrinking the screen to resemble a Polaroid in some ways), cinematographer Jarin Blaschke (who worked on Eggers’ debut The Witch) returns to loan a similar brand of welcomed dreariness to the visual palette that makes nearly every frame of the picture a point of intrigue.

You’ll, too, learn your fair share of nautical idioms and myths, to boot, with creatures like seagulls serving as the souls of fallen sailors, plus delightfully Freudian interpretations of a mermaid’s nether regions in contrast to the film’s phallus-shaped cornerstone. In addressing Ephraim and Tom, the film posits the two as a crossover of storied Greek characters, particularly Proteus and Prometheus. Proteus was the wise old prophetic man of the sea, with copious knowledge and unwavering discipline in the face of sea creatures, while Prometheus was a trickster Titan known for his untrustworthy sensibilities. Draw your own conclusions. That’s only the beginning of where The Lighthouse takes that interpretation.

As an exercise in reviving old expressionistic filmmaking styles, The Lighthouse is a big win. Its ability to take two talented men from different generations of acting and pit them in a self-reflexive match of wits as they struggle to grapple with their own identities is a fascinating concept no matter the setting or the stakes. If this is your cup of tea — and by this point, you probably already know whether or not it is — take a big sip.