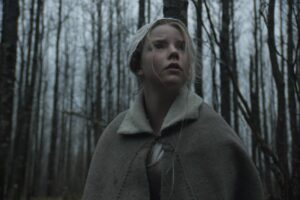 First-time writer/director Robert Eggers has had quite a ride with his debut film The Witch, earning the respect and endorsement from the Sundance Film Festival, the majority of American critics, and even the Satanic Church. His film is meant to be both an homage and an ode to New England folktales and fairytales centering around witchcraft and the supernatural. Most of the film’s dialog and structure came from folktales from over two-hundred years ago, as stated in the film’s end credits, and the look and feel of the film is remarkably 17th century, right down to the environments Eggers utilizes.

If nothing else, The Witch is destined to be one of the most aesthetically refined and remarkable films of the year, let alone most beautifully shot horror film of the year. Cinematographer Jarin Blaschke emphasizes the eeriness of the deep-wooded New England plantations, with precise focus on the location-swallowing fog and the overcast skies. As dreary and as miserable as the film looks, it’s also immersive in the regard that it clearly plunges you into a different world; one you haven’t been familiar with in horror films in quite sometime. Every year, we’re almost guaranteed to get a Gothic-style, Victorian-era film that emphasizes lush scenery and immaculate cinematography, but rarely do the visual conventions of 17th century folk intersect with contemporary horror. In that respect, The Witch is a novel concept that sets itself up for noteworthiness on the basis of its locational possibilities alone.

Before I get any more carried away than I already have, the plot must be introduced. Set in the aforementioned century, the story revolves around a traditionalist, god-fearing family led by William (Ralph Ineson), the intensely religious patriarch. His family consists of his wife Katherine (Kate Dickie), his eldest daughter Thomasin (Anya Taylor-Joy), his son Caleb (Harvey Scrimshaw), and his young twins Mercy and Jonas (Ellie Grainger and Lucas Dawson). The family leaves their old land to start a new life on a farm, where Katherine gives birth to her fifth child, which is subsequently abducted by a witch before being sacrificed.

This starts an unrelenting curse on this family that works to destroy it by going after its most innocent and helpless individuals, the children. Eventually, Caleb winds up becoming the witch’s next victim, as a controlling and possessed spirit enters his body and begins to overtake him, all while the family is grieving over the loss of their newborn. Meanwhile, William and Katherine find themselves considering sending Katherine into an arranged marriage now that she is becoming older, and seeing as she’s proven herself in capable to take care of her younger siblings.

The Witch is very much a family drama, with psychological and supernatural horror ingredients injected into the film’s premise to add the unsettling undertones. Unfortunately, The Witch gets its atmosphere down to a tee so well that it forgets to make a story that’s as creepy as it sets itself up to be, let alone moving or worthwhile. Despite such wonderful, gloomy settings, the film never becomes very creepy or interesting enough for audiences to care. Everything, from the characters’ personalities to their religious guidance, feels within arm’s reach of us, and while the authentic, period-specific dialog is a commendable element, it only works to further distance people from the film’s themes.

This is truly a shame because I appreciate what The Witch sets up: a family rooted in deeply traditionalist, religious doctrine that is slowly finding out that Jesus, God, or any other kind of figure from their Bible cannot save them from the evil and sin that runs amok in the world. The idea that Jesus couldn’t save himself is one that’s hard enough to grasp, but what happens when one realizes that, because of that, he cannot save him or her either? William, played very well by Ineson, who goes for assertive and unnerving here, has the hardest time grappling with this idea as he watches his family crumble before his eyes.

With that being said, watching The Witch can be a frustrating experience just because of how lifeless it often is. The level of character interest doesn’t come anywhere close to the interest level of the film’s setting, and as a result, there’s little to connect to or embrace. It wasn’t until about the hour mark that I truly felt conflicted as a viewer; here’s a film with a biting, interesting premise and themes that’s weighed down, not only by its esoteric approach, but also by its lack of legitimate creepiness until the last twenty minutes.

The Witch doesn’t flatline entirely like The Forest or other horror films of recent years, particularly ones neutered in content and approach to attract a younger crowd, but it doesn’t titillate or excite like It Follows or The Sacrament, both films with similar premises, strong themes, but far more accessible characters and consistently interesting setups. Some will claim my soft dislike for The Witch comes from my lack of tolerance for slowburn horror, but consistent readers of my work know I hold slowburn horror near and dear to my heart and vastly prefer it over the tropes that have become commonplace in contemporary, American horror. The problem with The Witch, at the end of it all, isn’t its pace, it’s the paces it takes in the wrong direction.