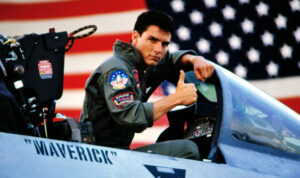 NOTE: This review was originally written and published in 2014.

From its attractive lead actor who went on to become a huge name, its producer-credit to industry legend Jerry Bruckheimer, its soundtrack composed of rock and pop hits, its inclusion of action sequences, romance, and average to mediocre displays of acting, Top Gun includes every minute detail about the classic American movie blockbuster. What’s surprising, in addition, is that the film actually has credible payoff in the end, and while existing mostly as a curious piece of cinema history, it also works to be an entertaining picture on a basic level.

Tom Cruise stars as a United States Naval Aviator Lieutenant by the name of Pete “Maverick” Mitchell, a young, hot-shot aviator who loves flying and goofing off when he really should be working. His partner-and-crime and longtime friend, whom he considers family, is Nick “Goose” Bradshaw (Anthony Edwards), who has a wife and kid back home, but accepts Maverick mainly because of the fact that he doesn’t have much else besides him. Maverick’s father was killed in Vietnam, which only leaves Maverick in denial that his dad’s death was because of circumstance, rather than the actuality of the situation being a personal mistake.

After one goof-off session too many, Maverick and Goose are sent to Fighter Weapons School (nicknamed “Top Gun”) by their superior officer, who admires their talents but simply can’t control them and recognizes they deserve to be placed in the elite squad of pilots. Upon arriving to Top Gun, Maverick meets a wonderful woman by the name of Charlotte Blackwood (Kelly McGillis), who he learns is his instructor during his time at the school. He also clashes with rival student Lieutenant Tom “Iceman” Kazanski (Val Kilmer), whom, while he detests on his competitive level, thoroughly admires him for his skill and devotion to flying.

One of Top Gun‘s underlying strengths is how it doesn’t settle for being another indistinguishable piece of action filmmaking nor a fluffy romantic piece with some disjointed shots of aerial combat thrown in as an excuse for screenwriting diversity. The film also attempts to humanize the bond squadmates have with one another, and show how one comes of age when they are thrown into a group with extremely high expectations set on them. The issue here, however, is that writers Jim Cash and Jack Epps, Jr. throw those elements in the film at such an alarmingly fast rate that it’s easy to miss these subtler, low-key elements that, in turn, work to make up the film.

The scenes that do work and require no further contemplation are the scenes of aerial combat, which are clear, coherent, and intense thanks to Tony Scott’s strong direction. With his shots and structure, Scott always strove for clarity even when it seemed that little could be established. Whether he was filming a runaway train or fighter jets circling around an area in the sky, appearing as if they were defying gravity with every nosedive and loop, Scott was clear and vivid with his direction. Give Scott some great, crystal-clear cinematography by Jeffrey L. Kimball – who worked with Scott through much of his career – and you have a visually distinct and astonishing picture.

If only Kimball and Scott had better writing and acting to work with when it came down to structuring Top Gun‘s story. The film’s story often feels too cluttered, as I said, struggling to fit so much into its one-hundred and nine minute runtime, and then on top of that, you have average acting by Cruise and McGillis, some strong work by Edwards, and some seriously mediocre and over-the-top acting by Kilmer, who throws scenes off instantly when he walks on screen. Top Gun is so structurally uneven that it is a blessing that the film has its unique visuals and strong cinematographical work going for it.

Yet, there’s something here I can’t easily dismiss like I can with the barrage of other blockbusters I am put through every summer. Maybe it’s the musical genius and simplicity of Kenny Loggins’ signature song “Danger Zone,” which comes on about a dozen times in the film. Perhaps it’s the gay subtext Quentin Tarantino’s character Sid alluded to in the now famous monologue in the little-seen independent flick Sleep With Me that kept me alert and interested. Or perhaps it’s just that this film is so American that is hurts at times. As difficult as it is to define and place, Top Gun can’t be written off with a few words, and instead, must be given some solid care and attention as if it were an award-worthy movie rather than just a piece of summer fluff.

My review of Top Gun: Maverick