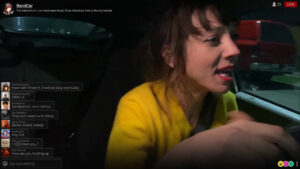 You have to give director/co-writer Rob Savage his flowers for knowing his style and going above and beyond with making it successful. In the summer of 2020, the few theaters that were open in America showed his film Host for months on end. A 56-minute chiller set on a Zoom call, it introduced us to a new player in the figuratively and literally shaky genre of “computer screen horror.”

Savage made that film for $35,000 and his latest Dashcam for $100,000. Considering what he’s made when working with peanuts, the first studio to offer him $1 million is gonna see their dollars stretch like a limousine.

Dashcam is 67-minutes of brutal body horror, captured in raw detail via an iPhone that belongs to the main character, Annie (Annie Hardy, lead vocalist for the indie band Giant Drag, who is also somehow, someway 41-years-old). Annie is destined to be the most unlikable character committed to film in 2022. She’s a boisterous, MAGA-loving, anti-vaxxing, COVID-denying baby, which also suggests she’ll be elevated as an unlikely hero by a certain audience. The foulmouthed internet personality streams for a crowd largely as repugnant as herself (seen, but not heard, via an ongoing chatroom in the bottom left corner of the screen) where she does a show called “BandCar.” She raps while driving around the city of LA. There’s not much to it.

Early in the film, she bolts to London, where she plans to stay with her former bandmate Stretch (Amar Chadha-Patel) and his girlfriend Gemma (Jemma Moore). The sight of her MAGA hat prompts Gemma, who is already peeved about her presence, to kick Annie out of their apartment. One thing leads to another, she steals Stretch’s car, and soon enough, she’s tasked with taxiing around Angela (Angela Enahoro), an elderly, disoriented, and clearly sick Black woman with psychic powers and bowel problems. Angela says little but is prone to other-worldly levels of violence, and the bulk of the film is her attacking Annie and Stretch.

Dashcam takes on the personality of Annie — how could it not? — who is a powder-keg of immaturity, adolescent rage, and impulsiveness. Her raps aren’t anything special, for one. They’re the kind of shock value bars that are meant to make your jaw drop with callous references to rape, anal sex, and versatile uses of George Carlin’s seven dirty words. As if in constant competition to be more vile than the lead character, the chatroom (which does reward an easily distracted viewer with a few laughs) is a pretty accurate display of social media, with numerous faceless individuals spewing reactionary, often hateful commentary as the graphic events unfold on-screen. Annie doesn’t interact with it, but she does get asked to reveal her breasts quite frequently (maybe the most accurate detail in the whole film).

What kept me constantly engaged with Dashcam was its unbridled rawness. This movie is categorically insane at times, as wildly unpredictable as any found footage flick you’re likely to find. It’s designed to provoke audible gasps and push buttons, which I admittedly kind of admire. I don’t have to agree with Hardy’s politics (she makes very clear on Twitter that most of her character’s beliefs in this movie are her own). I can sit back and enjoy the ride. That might be the takeaway lesson, if there is one, in this blood-splattering, feces-dripping, unapologetically instigating piece of schlock.

NOTE: Dashcam is now playing in theaters and available to rent on VOD via a variety of platforms.

NOTE II: Stay for the end credits. You’ll be treated to Hardy’s freestyle rapping, where she disses every single person who worked on this movie as their name appears in the chatroom.